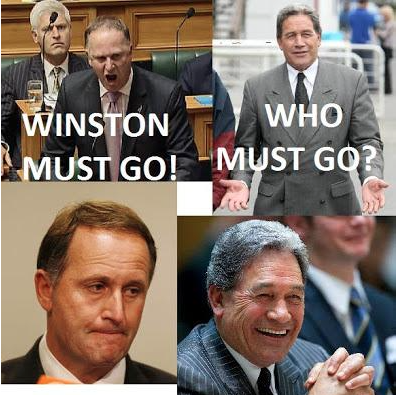 Understandably, most of the New Zealand Left is giddily euphoric as the result of yesterday’s bolt-from-the-blue-brigade news. Some of us have spent virtually the entirety of our adult lives awaiting this moment – so a certain level of enthusiasm is to be anticipated.

But once the initial shock and jubilation fades away, the canny political mind starts considering what happens next. And, for that matter, what’s already perhaps been happening a little beyond the ken of the public eye.

We’re likely to hear an array of different theories over the next few weeks as to just why Key chose to resign rather than seek a fourth term in office. Some of them are more plausible (and less interesting) than others.

It’s in that spirit that I share the following:

A few months ago, I was told by persons in a position to know that the National Party was looking in to ways it could ensure a fourth term by stitching up a coalition arrangement with New Zealand First. The most obvious manifestation of this so far has been attempts to talk up the inclusion of Shane Jones on our 2017 List (the idea being that Jones, as a man of proven amenability to National, would form something of a ‘bridge’ into our Caucus for National were he successfully elected – and would be a counter-pole to Ron Mark; both of these factors making a Black-Blue coalition arguably more likely).

But it was also noted that one of the key ‘sticking points’ between National and Winston Peters which would have to be excised in order for a coalition to take place … would be John Key. There’s so much ‘bad blood’ between between them that Key remaining leader of National and Prime Minister would form an insurmountable obstacle to a fruitful relationship with New Zealand First.

So the ‘idea’ was to have John Key replaced by Bill English – on the assumption that the latter’s more ‘restrained’ economic approach and considerably dialed down enthusiasm for social causes might make him a better (even ‘Bolger-esque’) working-mate for Peters. [with an implicit logic that even if National took a reasonably severe popularity hit from replacing Key of several percent and lost one or more support-parties [either due to Peter Dunne in Ohariu losing his seat, or the Maori Party finally siding with someone else], they’d still likely command more votes than Labour+Greens – albeit with newfound need of a new coalition partner to get htem back over 61 seats in the House – a situation for which a ‘double-digit’ New Zealand First would be the ideal remedy]

At the time … I dismissed it as a hypothetical strategic play somebody had concocted over too many whiskeys and perhaps a bit of NOS. But given yesterday afternoon’s events (and a number of other things I’m aware of going on back there in the shadows) … I’m no longer so sure.

Certainly, some of the events required for such a previously unthinkable constellation of political forces to take place are now in motion. Much to my consternation, of course.
In any case … I think I know what I have to do. Work harder to support Ron, block Jones, and help keep New Zealand First from falling prey to National’s nefarious clutches.
Now, more than ever, a left-wing counterweight within NZF is *vitally* important.