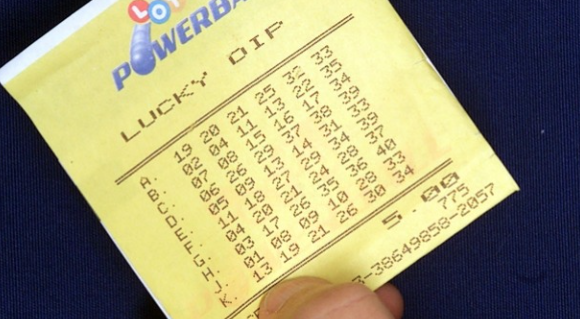 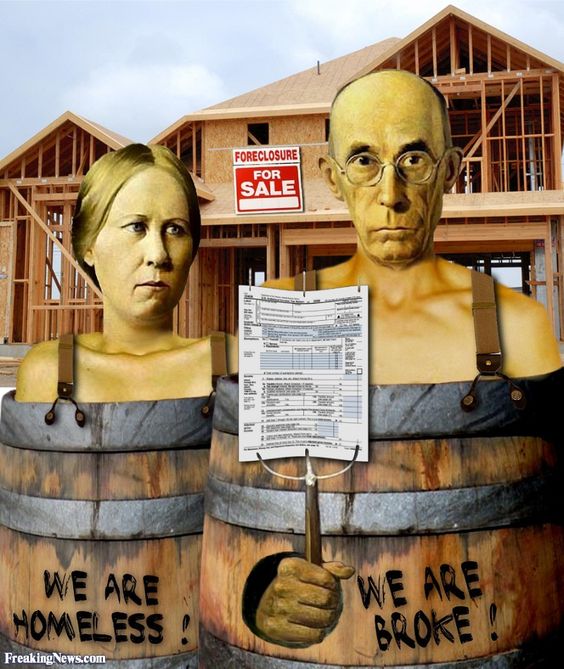 Make no mistake, housing has become a crisis in New Zealand as this May poll for  a TV3/Reid Research Poll highlighted;

Even 61% of National voters accepted the new reality in our once-egalitarian nation. Housing unaffordability (for the middle classes) and homelessness (for beneficiaries and the working poor)  could no longer be ignored.

Stepping back to 20 August 2007, National’s newly-elected leader, John Key, made an impassioned speech to the  Auckland branch of the New Zealand Contractors Federation. In it, he excoriated the then-Clark-led Labour government;

“Over the past few years a consensus has developed in New Zealand. We are facing a severe home affordability and ownership crisis. The crisis has reached dangerous levels in recent years and looks set to get worse.

The good news is that we can turn the situation around. We can deal with the fundamental issues driving the home affordability crisis. Not just with rinky-dink schemes, but with sound long-term solutions to an issue that has long-term implications for New Zealand’s economy and society.

National has a plan for doing this and we will be resolute in our commitment to the goal of ensuring more young Kiwis can aspire to buy their own home.”

Nine years later, Key’s description of New Zealand’s housing crisis has changed markedly. It is now a “challenge“, as he painfully tried to explain on TVNZ’s Breakfast programme;

“I don’t think it’s a crisis, but prices are going up too quickly. There are plenty of challenges in housing, and there have been for quite some time.”

On 9  November, a Hibiscus Coast couple were the incredibly lucky couple to win the latest multi-million dollar Lotto prize; 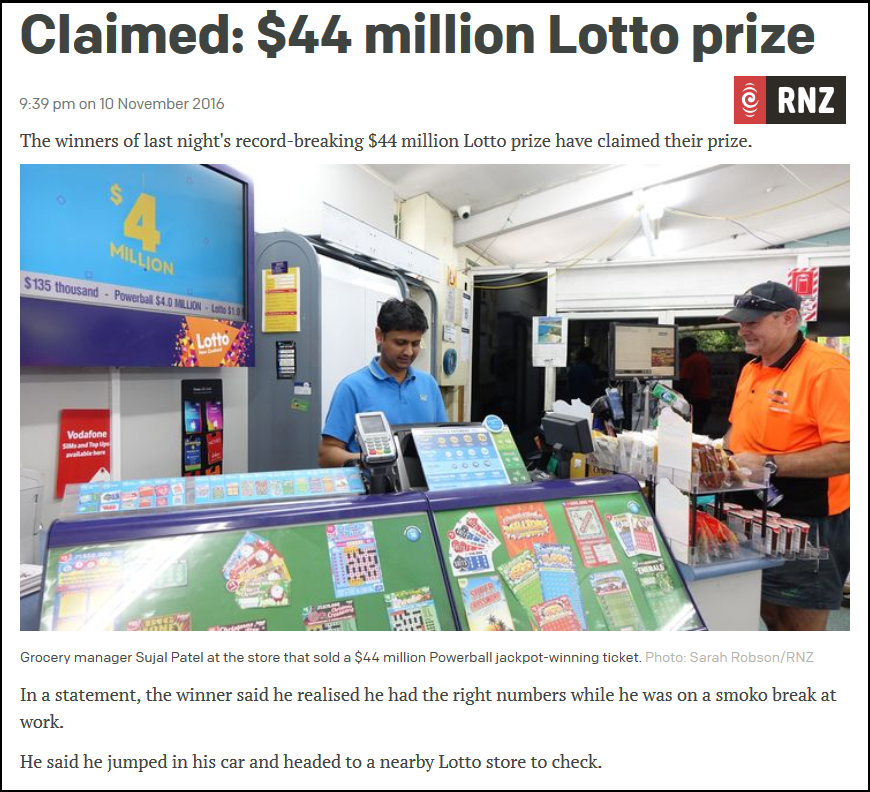 The man’s wife said at first she thought her husband was joking about the win.

“My head started spinning, my heart was racing and I got the shakes.”

The couple claimed their prize at Lotto’s head office on Thursday afternoon.

“We’ve been busting our guts trying to buy our first home,” the winner said.

“We just went to the mortgage broker earlier this week to see what they could do to help. But they just couldn’t make anything work for us.

“We were absolutely gutted and I just said ‘maybe that ship has sailed’.

“But my wife tried to stay positive and said ‘don’t worry, something good will happen for us’.

“I don’t think either of us thought that the something good would be $44 million.”

Note what the woman said here;

“We’ve been busting our guts trying to buy our first home. We just went to the mortgage broker earlier this week to see what they could do to help. But they just couldn’t make anything work for us. We were absolutely gutted and I just said ‘maybe that ship has sailed’.”

When couples have to rely on winning Lotto to be able to afford to buy their first home,  there is something seriously askew in society.

“We are facing a severe home affordability and ownership crisis. The crisis has reached dangerous levels in recent years and looks set to get worse. This is an issue that should concern all New Zealanders. It threatens a fundamental part of our culture, it threatens our communities and, ultimately, it threatens our economy.”

In the United States, commentators from the msm, politics, dissident community; and further afield, have rapidly come to the realisation that Donald Trump’s unlikely, unforeseen, and up-till-now improbable victory in the 2016 Presidential  race was predicated on the belated understanding that globalisation and neo-liberalism  have left behind millions of people.

In the Voting Booths across the United States, Consumers became Citizens again, and cast their ultimate sanction against the political establishment and those who supported the neo-liberal orthodoxy. The status quo of Margaret Thatcher and Ronald Reagan (the latter, ironically a Republican like Trump) was utterly repudiated.

The disenchantment and alienation of the Working and Middle classes germinated during the 2008 Global Financial crisis and resulting Great Recession – the effects of which are still with us, eight years late. In the United States, millions of Americans lost their homes. Joseph Stiglitz and Mark Zandiaug wrote in August 2012;

More than four million Americans have lost their homes since the housing bubble began bursting six years ago. An additional 3.5 million homeowners are in the foreclosure process or are so delinquent on payments that they will be soon. With 13.5 million homeowners underwater — they owe more than their home is now worth — the odds are high that many millions more will lose their homes.

Most telling was this criticism by Stiglitz and  Zandiaug;

Writing for the Huffington Post a year later, David Coates pointed out;

“… the vast majority of those four million lost their homes because they lost their jobs, not because they had in better times taken out mortgages that they could not afford.

It is not the rich who are being foreclosed. It is those on the margin of the core middle class. It is particularly middle class minorities who have taken the greatest hit on both their personal wealth and their associated credit scores. Falling house prices since 2008 have pulled median white net-worth down by 27 percent but median black net-worth down by anywhere between 40 percent and 53 percent.”

All the promises of neo-liberalism had come to nought. Instead millions had lost their jobs and those lucky enough found new work in low-paid service industries. Take-home pay was cut – and Humiliation applied in abundance as ‘compensation’.

The Working and Middle Classes not only lost their job and homes – their new status in low-paid work was precarious.

Events post-2008 hastened the  demise  of the American Dream and the rise of the Precariat, as Richard  McCormack wrote, in February of this year for the Manufacturing and Technology News;

The effects on the U.S. economy caused by 30 years of offshore outsourcing of production and jobs is starting to drive major changes in the American political system. The rise of a “precariat” class of Americans — those who are living “precarious” lives — has created a populist movement that shows no sign of acquiescing to the “establishment” in both the Democratic and Republican parties.

The new precariat comprises a growing class of people who are going nowhere in their jobs, who are insecure and unstable. The group is “experiencing the breaking apart of the American Dream, which is what historically held the country together — the rise of the middle class, with everyone doing better,” notes visiting scholar John Russo of Georgetown University’s Kalmanovitz Initiative for Labor and the Working Poor. “It’s not working that way any more.”

Driving the rise of the precariat is a society that is not generating enough wealth. De-industrialization, the shift of major goods-producing industries to foreign nations, and both the Republican and Democratic establishment’s embrace of free trade, are leading to a populist uprising.

The precariat is becoming one of the largest classes of Americans, encompassing far more than blue-collar workers who have been slammed by economic forces outside of their control. It now includes millions of Americans with college degrees who are under compensated or can’t find full-time employment with benefits.

As white-collar jobs have been outsourced, Americans with more than high-school degrees are starting to see their prospects “mirror those of the working class,” says Russo. “That insecurity and instability is now part of their life. That is why this new group is not yet a class in itself. It hasn’t defined what it is going to be.”

It is fragmented, but it is big, and much of it is angry.

In his article, McCormack quotes John Russo from the Georgetown University’s Kalmanovitz Initiative for Labor and the Working Poor;

“As steady formal work has been disappearing over time, informal work began to move beyond traditional concepts such as consulting, internships, subcontracting, privatization and intermittent employment,” Russo explains. “Rather than the continued rise of the formal economy, it is the informal economy that is growing.”

The precariat is “potentially all of us united by the fear of insecurity,” he notes. It is made up of “individuals living precarious and insecure existences lacking employment security, job security, income security, skill security, occupational security and labor market security.”

This is no longer the underground economy, but includes displaced individuals from the public and private sectors, millennials dealing with mountains of student debt, and baby boomers forced into early retirement without enough savings to support themselves.

There is little public assistance for the precariat class and “they’re not making demands to get better wages or improved benefits [because they] are replaced easily,” Russo notes.

Three years after Coates’ story,  and nine months after McCormack’s insightful analysis of the public mood, Trump’ ascendance as America’s 45th President was complete. Trump won the States where blue-collar workers had suffered the most.

The story of globalisation and neo-liberal “reforms” of our own economy has followed a familiar story; loss of long-term employment; ever-increasing need for re-training; the rise casualisation and contract piece-work; and the increase of lower-paid service-work.

“The workplace is likely to be further casualised. “

Which adds further hopelessness to New Zealanders increasingly locked out of what was once known as the Great Kiwi Dream of home-ownership.

“I want New Zealanders to be aspirational – to want more for themselves and their families, and to know that they have opportunities to do that.”

Those words ring hollow as National scrambles frantically to make itself  “look busy”, trying to alleviate the dual crisis of  worsening home ownership and homelessness.

Bennett’s suddenly-announced  policy of bribing state house tenants with (up to) $5,000 was widely seen as a panic-driven, ad hoc policy. It certainly caught Finance Minister Bill English by surprise, having no forewarning of Bennett’s media announcement on the issue.

The twin tsunami-waves of homelessness and housing unaffordability appears to have utterly over-whelmed National Ministers.

As Trump’s victory in the US Presidential election has demonstrated with crystal clarity, Consumers can easily become  Citizens again, re-discovering the power of their Vote. When Citizens’ anger becomes focused, and a perceived solution (or even just an opportunity to say “FUCK YOU!” to the Establishment) is put before them – they will vote for it.

Especially when they have lost so much, and have little left to lose.

Such was the case of  the US presidential elections, and before that, the ‘Brexit’ Vote.

As New Zealanders become more and more conscious of how much they have lost in the last thirty years, they too, will find themselves pissed off.

The opening lines of the song  from ‘Les Miserables’ – Do You Hear The People Sing? – should serve as a reminder to the political establishment in this country;

“Do you hear the people sing?
Singing the song of angry men?”

The Great Kiwi Dream of home ownership was never predicated on the long-odds offered by  a little yellow piece of paper; 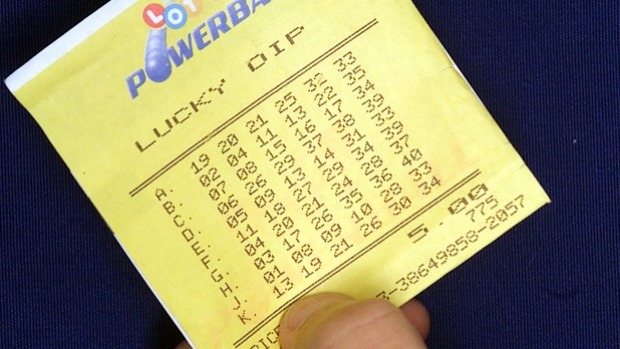 Home ownership should not be a Lottery.

TVNZ: Is there a housing crisis? John Key fails to say yes or no after being put on the spot

Manufacturing and Technology News: The Rise Of The American ‘Precariat’ – Globalization And Outsourcing Have Created A Combustible Political Culture

Metrolyrics: Les Miserables – Do You Hear The People Sing?

National and the Reserve Bank – at War! 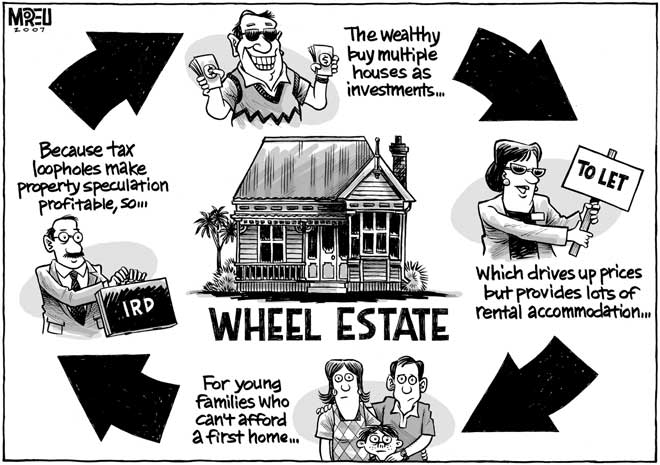