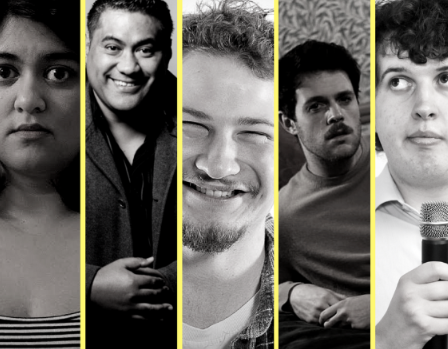 A musician, a Ministry of Justice employee, a Master in Philosophy, a legal secretary and an IT student are the finalists for this year’s Billy T Award.

Substantial growth of budding talent in New Zealand’s comedy industry lead to a record-breaking 32 applicants vying to get a nomination for the 2017 Billy T Award.

Billy T James changed the face of comedy in this country, forging a hugely successful career out of making people laugh. To celebrate his memory and achievements, the New Zealand Comedy Trust created the annual Billy T Award to support up-and-coming comedians with the outstanding potential to take their comedy career to the next level.

At the applicant showcases, 2016 Billy T Award winner David Correos brought his high-energy craziness to the stage to fire up the audience, and introduced 32 comedians from across the country on to the stage at The Classic Comedy & Bar in Auckland over two-nights. These emerging talents impressed the audience and panel of expert judges, showcasing a wide range of funny perspectives through their diverse voices.

Tasked with making the tough decisions are an expert panel of five judges, who have a wide range of combined experience across the comedy, television and theatre industries.

The comedians presented a plethora of creative inspiration in their show pitches. On stage their performances were electrifying and showcased some of the fresh ideas coming through. This surge of exciting talent coming through means that the New Zealand comedy scene is certainly in great shape.

The nominees for the 2017 Billy T Award are selected on their proven comedic ability; talent; dedication; current form and outstanding potential, and will be judged on all aspects of their show in the 2017 NZ International Comedy Festival powered by Flick Electric Co. Final performances and the award presentation will happen at Last Laughs on Sunday 21 May 2017.

We are excited to announce that the five nominees for the 2017 Billy T Award are:

Angella Dravid:
Angella’s unique brand of comedy blends moments of gaping silences with stories that lead into surprising absurdity. She’s more often described as “strange” and “mysterious”, and The Wireless described her role in Funny Girls as “that creepy girl who drifts around and has no concept of personal space”.

Li’i Alaimoana:
New Zealand born Samoan and Wellington raised, Li’i Alaimoana works at the Ministry of Justice by day and came back to regularly perform comedy in 2015.

A charismatic performer, with an eclectic combination of music and stand-up comedy, Li’i’s style of comedy has brought him a strong following in his hometown.

Patch Lambert:
Patch Lambert. Lovable bogan, scruffy underdog. On stage, he casts an endearing but confident presence wrought with earnestness and naivety as he delivers open and honest stories about the world he lives in… A world where he is just a gnarly little grub from the Hutt. He has twice been nominated in the New Zealand Comedy Guild Awards.

“Leads us on adventures through his life and makes us feel like his mates at the pub, rather than an audience at a performance… Patch is a lovable, clever and funny young man” – Art Murmurs

Paul Williams:
Paul was born and raised in Nelson where he grew up playing a lot of sport and performing in amateur musicals. His love for comedy began at Nelson College where he joined the prestigious theatre sports team. Upon graduation, Paul moved to Wellington to study musical theatre. It was here that Paul performed his first ever stand-up set at one of the Raw Monday nights at Fringe Bar.

Paul has since attended the New Zealand International Comedy Festival, the Melbourne Comedy Festival and the Edinburgh Fringe while performing in Rose Matafeo’s show ‘Finally Dead’. The 2017 Comedy Fest will be Paul’s first ever solo show and he’s super excited about it.

Ray O’Leary:
Ray O’Leary is an up-and-coming Wellington comedian known for his dark and political style. Ray has been described as ‘thought-provoking’, ‘provoked me to think’, and ‘thought-provoking’ and will have you laughing as he tackles all the tough issues, from penal sentencing to charity. Ray has a Masters in Philosophy and has quickly established himself, becoming a regular on the Wellington comedy scene with his style of outrageous one-liners, deadpan delivery and confident awkwardness.

“Not only makes you laugh, but makes you think” – Art Murmurs