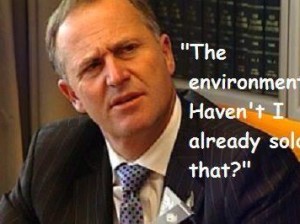 Every day when you open the newspaper it seems there’s a new study, record broken or super storm related to climate change. Alongside 190 other nations, New Zealand has agreed to start reducing our emissions, but the country’s next power station looks like it will run on gas and release climate-changing pollution. I think it’s a strong example that our current electricity policies are failing to help us achieve our clean energy ambitions.

Nova Energy is proposing to build a new 360 MW gas-burning power plant in south Waikato. Some of that gas will likely be from fracking, and burning it will contribute to climate change. It’s estimated to release between 425,000 tonnes of carbon dioxide a year, if it runs at the same level as a similar existing plant in Stratford. To give a sense of the size, it would take 16,989 hectares of new forest planted to offset that, over the 20 year life of the plant.

Nova’s consent application comes less than a year after Genesis reversed a decision and decided to continue burning coal at its massive Huntly power station, locking in more pollution into the next decade.

In New Zealand, we are rightfully proud that approximately 80% of our electricity comes from renewable sources and the country has a target to reach 90% by 2025. But why are we then building more fossil fuel generation? When we have less renewable generation as a percentage than we had in 1980, why is the electricity sector’s response to build more polluting coal and gas generation?

To me this proposed plant is a singular example of the failure of our electricity system.

We set a target to get to 90% renewables but National developed no plan to get there, and in fact emasculated the Emissions Trading Scheme, which was designed to send a price signal against investing in new emissions. The industry is building what they know and the low carbon price sends them the signal to invest in fossil fuels.

We have almost 4000 MW of consented renewable projects that be built tomorrow, for example the Castle Hill wind farm, so why the reliance on fossil fuels?

One part of the answer is the investment uncertainty arising from the Government’s subsidies to keep the Tiwai aluminium smelter open for a few years. It seems no one wants to risk building a large new clean power project when more than a tenth of our electricity demand could disappear at short notice.

Gas “peakers”, like Nova’s proposed plant, are often presented as an indispensable part of our electricity system to cope with the electricity demand peak (mostly when people get home from work and turn on the lights, heaters and start cooking dinner) and also to deal with fluctuating wind generation. It’s unimaginative to believe burning gas the only option to deal with those issues and, in fact, contrary to what’s happening overseas.

If more pollution is the answer we are asking the wrong question.

I was recently in the United States and met leading energy thinker Amory Lovins, of the Rocky Mountain Institute. He coined the term negawatts, to illustrate that it’s considerably cheaper to save electricity at key times than just build new megawatts of generation.

We could look at price signals to help save electricity at peak times. I’m a big fan of real-time prices where customers can choose fluctuating prices based on the cost of generation. That sees people move their consumption by making decisions like having hot water cylinders or spas on timers, or doing the laundry during the day or late at night to avoid the more costly peak.

We could look at efficiency. Our Energy Efficiency and Conservation Authority (EECA) estimates we could save 20% of the $18 billion New Zealanders spend on electricity every year. I’m proud the Green Party, working with the Government, insulated 300,000 homes and along with making them warmer, healthier homes saved a lot of electricity too. Unfortunately the Government’s latest Budget saw insulation funding reduce to its lowest level in years, despite there still being hundreds of thousands of cold, damp and expensive-to-heat homes.

It’s not exactly a new idea, but we could look to burning wood in efficient wood burners, which is a cosy, carbon neutral solution to reduce the need to burn polluting gas. We could use the free power of the sun to heat and store water, reducing some of the need for peak time electricity generation. We could look what other countries have done to encourage innovative solutions that see people rewarded for using less electricity at peak or constrained times.

We are now seeing Tesla Powerwalls and other home-scale batteries imported into New Zealand and rapidly dropping in price. These allow power from solar panels or even from the grid to be stored when prices are cheap, to avoid the need to burn fossil fuels to supply the peak.

Like many Kiwis, I want to see a cleaner electricity grid and less pollution. In 2016, we shouldn’t be building more fossil fuel generation and locking ourselves into many more years of emissions. We have a wealth of alternatives available from new renewable generation to energy efficiency and conservation initiatives – and conservation is almost always cheaper than any other option.

Nova’s proposed station is a symbol of our climate failure and failure of the electricity system to deliver a cleaner grid. Building new power plants that will burn gas for decades to come will make it harder to do what’s right to stop climate change. We could be investing in more windfarms, solar power, and smart solutions.

We will be opposing Nova’s plan to build this new source of pollution, and opposing the Government’s weak rules that mean Nova thinks it’s a good idea to build it.

Environment Minister Nick Smith should step up and make Nova’s proposal to build a new gas-fired power plant a matter of national significance, so we can have a proper debate about it. We’re doing this because it’s only a “limited notification” consent application under the Resource Management Act (RMA), which means most Kiwis and myself won’t get to have a say.