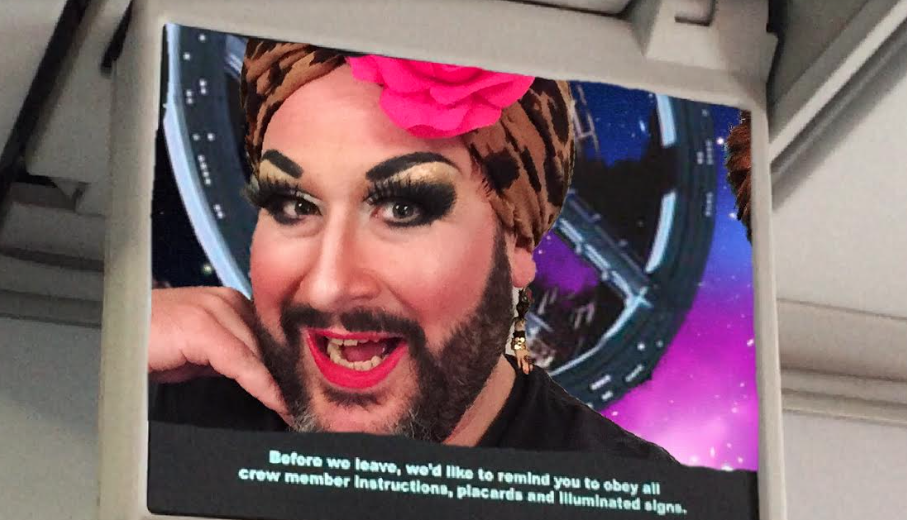 It’s 6:23 PM. I’m wearing a mens short-sleeved shirt from Macy’s, black Levi’s because I’m old, heels, and makeup I later described to the police as “Boy George Level”. My stomach is full of a yummy, fried chicken, “triple-H” burrito from Sweet Mother’s Kitchen. A treat to myself for a weekend well lived. A gay guerilla bar takeover at The Establishment on Friday, a show for review on Saturday, and just before dinner, three hours sitting for my portrait with Russian Born, Florence trained artist Tatyana Kulida. In her studio we discuss virginity, philosophy, and light.

It’s 6:23 PM on a grey, drizzly Wellington Sunday evening. I’m happy and tired and walking to my car, a 20 year old Ford Laser affectionately known as “the dad car”, and in my make-believe world of sci-fi, it is my space shuttle. I’m happy and content, and a little bit sleepy.

There’s a hand on my arm. Gripping my arm, pulling me back. I sway slightly in my heels. Both adrenal glands, perched above my kidneys, deep in my viscera, squirt their load of adrenaline into my bloodstream. My pupils dilate, my heart rate and breathing increase sharply. All of a sudden I’m not sleepy, I’m not thinking about my day. I’m right here, right now. Deadly calm.

He came from behind me, so I don’t get a good look at him. But I did what I’ve rehearsed in my mind dozens of times, because I’ve always known that how I am in the world, is asking for trouble. My hand slips into my pocket and closes around my smartphone, I retrieve it, look down and activate the camera. Press record. Point the front camera, the selfie camera, over my shoulder and pray that I don’t lose my prized iPhone to a mugging.

My brain processes his words. Angry words. Angry like a child who doesn’t understand why I’m not playing by the playground rules. An angry child, who in the absence of a teacher, is going to teach me a thing or two.

“YOU’RE NOT FEMININE BRO, YOU’VE GOT A BEARD AND SHIT”

And with those words the assault of the hand gripping my arm from behind escalated into a hate crime. All I want now is to get out of this intact.

I could have called the police immediately. Got into my car, the dad car, mere metres away, and dialed 111. But fight or flight is very real, and very powerful. And so I flew, I flew my pretend space shuttle to the top of the hill that I live on. I send a single tweet.

And so it finally happened, it went beyond the name-calling and threatening displays that are par for the course for gender-variant, trans, non-binary, drag queens, dykes, faggy guys, and all the others who break the playground rules of gender presentation in public. Someone put their hands on me.
Since then I’ve cried. I’ve felt depressed. I’ve abused McVitie Jaffa Cakes and Ice Cream (although not at the same time). I’ve been to work. I’ve talked to my friends. I’ve iMessaged six psychotherapists listed on an ACC microsite. I’ve discovered that ACC won’t cover therapy because my ox-like body doesn’t bruise easily and without physical damage ACC won’t see to helping with mental distress. I’ve applied online for EAP counselling that my employer provides (three sessions a year).

I’ve called the police. The police have called back, twice. I’ve called victim support. I’ve been to the police station and handed over the USB key with a copy of the video, and the geotagging, and timestamp metadata.

I don’t know what happens next. But I do know that I’ll continue to wear lipstick when I shouldn’t. Mix pearls and Victorinox jackets. Call myself he, call myself she. Always put a base coat and top coat on when I do my nails. I’ll continue write software for a living, and tinker with my home-brew climate control system in my bedroom. I’ll keep telling you I live on #spaceStation1, and you’ll believe it, because it’s true in it’s own way.

And another part of me will be a bit harder. A bit more observant when out, constantly scanning for trouble, and at the same time, the way out of trouble.

Wellington is safer than most cities in New Zealand. But everything is relative. And a hate crime can still happen on a quiet Sunday afternoon, by the bus stops, at the end of Courtenay place.

LaQuisha St Redfern is the drag alter ego of gender nonbinary identified Conrad (Connie) Johnston. LaQuisha lives on Space Station 1 in geosynchronous orbit about Wellington, New Zealand with her trusty pussy cat Cuddle Unit 5. Conrad was born and raised in Ngāruawāhia in the heart Tainui and the Kīngitanga. His whakapapa links him tribes in England and Scotland, though not to Māori waka, who traversed the vast distances of the pacific guided by the stars, like some great interstellar fleet. If pressed about pronouns she for LaQuisha and Connie. But never he for LaQuisha.