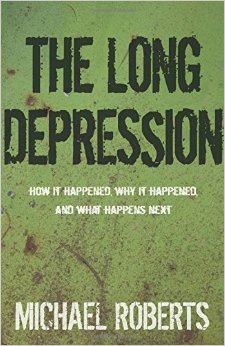 Michael Roberts new book The Long Depression (TLD) brings together much of his previous work from his blog and articles. It follows his previous book The Great Recession (TGR) that looked at the causes and effects of the so-called Global Financial Crisis (GFC) of 2008. There will be no surprises in the book for those already familiar with his work but for those whose knowledge of Marxism is scanty or distorted by misrepresentation, it is a great read.

Roberts develops his argument that the GFC was not an accident or result of wrong decisions by central banks, or greedy Wall St traders. It was not an aberration of ‘financialisation’ where financial speculation undermined profits and created massive debt. It was necessary symptom of a crisis-ridden capitalism which since the end of the post-war boom entered a long period of stagnation, despite periodic ups and downs, signifying the increasing stagnation of global capitalism.

According to Roberts (and many others) what the GFC did was prove Marx correct. Long-term declining profits generate a massive surplus of money that loses its value unless capitalists speculate in existing asset markets creating bubbles from housing to commodities to bonds. Not until those bubbles burst and wipe out the fictitious value of inflated asset prices are the conditions for a return to profitable investment possible. The period of falling profits and the stagnation of growth which precedes the GFC ends only with massive devaluation of trillions of surplus capital to restore profitable investment is the broad definition of what Roberts calls The Long Depression.

In scientific terms, for a theory to work it has to explain not only past and present events better than its rivals but also offer predictions on future outcomes. Marxism does this well because while all change in capitalist society is explained as determined in broad terms by ‘economics’, society, culture and politics are factored into the analysis to account for variation in possible outcomes.

Great events such as wars and depression which shape our history and our lives are not only explicable but inform our understanding and our actions. Not the caricature of Marxism which reduces all human activity to ‘economism’ in which individuals are reduced to ciphers or automatons with no freedom of action. On the contrary Marxism proves that it is class struggle over the share of value that propels humanity (as represented by the proletariat that produces the wealth) to rid itself of the increasingly destructive capitalist system that ultimately threatens climate collapse and human extinction.

It is this point that is the key to our liberation. Roberts touches on it but does not develop it. Capitalism is an historical society that can last only so long as it can produce to meet human needs efficiently. It came into existence with the rise of the bourgeoisie who harnessed productive labor to reduce the necessary labor time needed to produce commodities. The reduction of necessary labor time was historically ‘progressive’ yet racked by contradictions. Under capitalism ‘progress’ is expropriated as rising surplus labor time (exploitation) in the form of profits by the class that owns the means of production. This contradiction causes the TRPF where the drive for profits meets the inevitable resistance of the proletariat over the share of value intensifying the class struggle and threatening to resolve crises by revolution.

So how do we predict the course of TLD today? While ‘economics’ accounts for the crisis and its severity, already built into ‘economics’ is the class struggle complete with class ideas and class actions most notably wars and revolutions. Each historic boom and bust cycle is therefore the product of class struggle. Each bust gets stronger and each boom weaker as we can see by tracking them.

The Long Depression of the 1880s which led to a weak boom until WW1 threw the proletariat into the trenches and stimulated new production in the victors and destroyed the industry of the losing capitalist states. But war brought with it the threat of revolution and there was no guarantee that the crisis would be solved and capitalism ‘stabilised’. It was resolved temporarily (outside Russia) by the power of bourgeois ideology and politicians who disarmed and trapped workers in parliaments, and where that failed unleashed fascist counterrevolution.

But the post-war boom was weak and the crisis returned in The Great Depression of the 30’s. This led to another World War in which the victors boosted production and developed new techniques while destroying the economies of the defeated states stimulating renewed capitalist accumulation known as the post-war boom. The potential for revolution in Europe was smothered by the allied troops or steered into ‘neo-colonisation’ in the ‘third world’. Once more the boom was short lived and a period stagnation followed.

Again the TRPF munched into profits which slumped from the early 1960s until the equivalent of a new World War, the neo-liberal counter-revolution, rescued capitalism in the 1980s from its impending demise. Neo-liberalism in the name of the ‘free market’ openly attacked workers resistance to rising exploitation, restored capitalism in the Soviet Union and China, and everywhere destroyed state assets to revive the rate of profit. Yet as Roberts shows, the upturn of the neo-liberal 1980s and 1990s was too weak to restore profit rates to post-war boom levels. The result was ‘financialisation’ as the surplus capital had no place to go except into speculation in commodities.

So the historical record shows that each crisis gets stronger and each upturn weaker because the worsening contradiction between the owners of the means of production and those who produce value leads capitalism to an inevitable decline. It cannot use its expropriated wealth to generate new wealth without destroying more wealth. Here we come to the most interesting final chapters of Roberts book. He spends some time speculating about Kondratiev Curves (K Curves) which Trotsky rubbished in the 1920s as a blind alley and nothing to do with Marxism which I don’t propose to debate here. Much more relevant is his argument about whether or not the Long Depression is the ‘terminal’ crisis.

This is an old argument among Marxists. Always keen to predict the inevitable fall of capitalism, Marxists have tended to see every crisis as the last one before socialism must replace it. The general rule of thumb is that capitalism must decline but it cannot fall unless pushed by the proletariat. As we have seen every crisis is caused by class struggle in which the relative strength of the two classes determines the outcome. Roberts takes this position and argues that if the capitalist ruling class can resolve the current crisis by defeating workers then a new boom of capital accumulation is possible. While this ‘possibility’ cannot be excluded I think that the destruction of the ‘forces of production’ required to exit TLD into an historically weak boom will be such that the Long Depression will become the last, or terminal, crisis, whose outcome must be either human extinction or socialism.

Briefly in summary, in every crisis, capital has to destroy more wealth to create new wealth. As the destruction gets worse, the ability of capitalism to survive is reduced. As more and more workers are thrown out of production, as their lives become more intolerable, they rise up and “blowback”. As more and more of the forces of nature are destroyed including the pre-conditions for human life in the biosphere, then a qualitative shift takes place in the resistance of labor. As the current crisis get worse the quality of revolutionary knowledge and action will develop. The class struggle throws up mass experience of struggle that tests the limits of capital and as class consciousness grows validates Marxism as the critique of capital and the promise of socialism. The proletariat adopts Marxism as its revolutionary program and representing humanity becomes the agent of the last revolutionary transformation before capitalism kills us all.

That is the prediction; whether it comes true or not is up to you.

Michael Roberts, The Long Depression: How it happened, Why it happened, and what happens next. Haymarket Books, Chicago, 2016