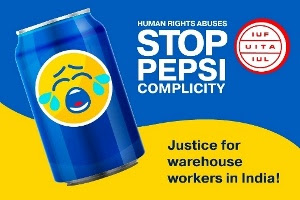 Global drink and snacks giant PepsiCo is complicit in ongoing human rights violations by a warehouse provider in the Indian state of West Bengal. Since 2013, IUF members have been supporting a courageous group of warehouse workers who are unemployed as a consequence of insisting on their right to form a trade union. The company which dismissed them – Radhakrishna Foodland Pvt. Ltd (RKFL) -operates a warehouse contracted exclusively to PEPSICO.

STOP PEPSICOMPLICITY! CLICK HERE TO SEND A MESSAGE TO PEPSICO!

In the course of the long struggle, already precarious one-year contracts have been unilaterally replaced with contracts for 3 months, pushing rights even further out of reach. And PepsiCo, which claims to have a rigorous supplier code and a strong dedication to international human rights standards, stands firmly behind its supplier’s practices.

PepsiCo’s refusal to recognize and to remedy ongoing human rights violations makes it complicit in human rights abuses – complicity that leaves their supplier code and their claimed dedication to human rights in tatters.