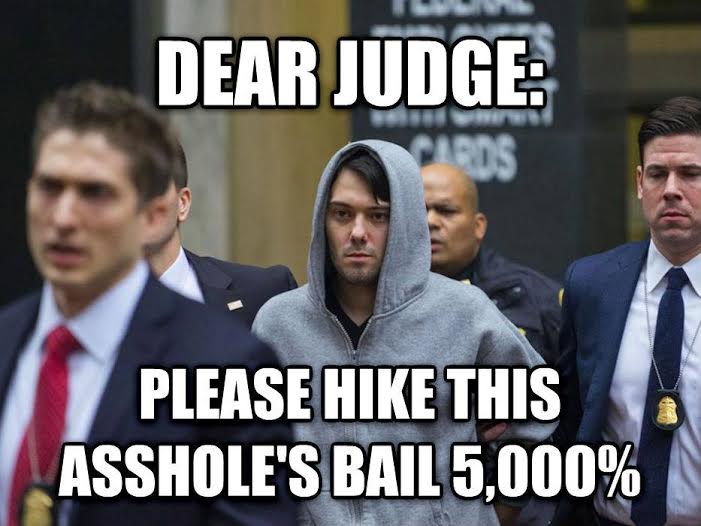 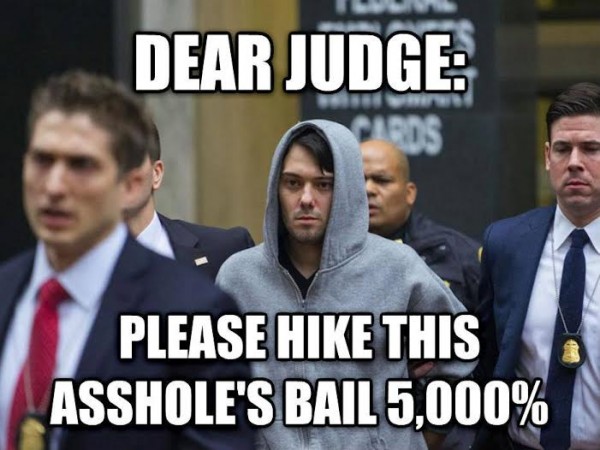 Ok, so the title’s a little misleading. I guffawed when news of Shkreli’s arrest came to my attention – as, seemingly, did just about everyone else on my corner of the internet.

If you’ve just joined us, and were living in heretofore blissful ignorance as to who and what Shkreli was … allow me to disabuse you. Remember that pharmaceuticals investment exec from a few months back who massively jacked up the price of a vital medication (by about five thousand percent) – and then appeared ready to “fight the whole internet” when people asked him to relent?

Few men in modern times have inspired such widespread revulsion. On the (American) political spectrum, everyone from Bernie Sanders to Donald Trump appeared to believe he was a nasty, entitled piece of work – and arguably more than a little evil.

Pro-tip: when even The Trump thinks you’re acting like a “spoiled brat”, you’ve gone so far over the line they might as well build a wall over it.

So – at least initially –  the fact that one hundred percent of people who’ve bought the latest Wu Tang Clan album are now in federal custody seemed like a cause for celebration.

But then I sat down and thought about the situation … and something just didn’t add up.

People were talking about how Shkreli’s arrest was evidence of “karma” in action. And while that’s certainly an amusing and narratively appropriate thought (to say nothing of the added levity that this comes less than a week after the whole Wu Tang fiasco), the evidence unfortunately doesn’t bear this out.

Shkreli’s being done for securities fraud. The charges he’s facing are for offences which he committed in the late 2000s and early 2010s. He’s not in custody for the vile acts of pharma-profiteering which earned him a hefty score in public opprobium and reviled infamy earlier this year.

Those outrages aren’t illegal. Hence why (with the possible exception of some amusing Tinder rejections) he wasn’t really punished for them.

Ripping off a few multi-millionaire investors, however, was against the law. And he’ll very likely suffer some reasonably serious consequences for it. (Which may play out quite positively for his purported future rap career – Shkreli’s gone from shoehorning the truth by claiming he’s hard and got cred because … get this … “I sell drugs!” to potentially facing jail)

And that’s the problem here.

Think about it this way:

All this jubilation about Shkreli’s arrest misses the point that the *wrong* crime is being punished.

Because according to the American legal system, it’s apparently entirely a-ok for one self-declared gangsta-capitalist to extort ordinary people by holding them hostage for the price of their vitally needed medicine.

But taking from the wealthy rather than the unhealthy? That’ll get the book thrown at you.

See how this is an inequitable situation?

Now don’t get me wrong. Investment fraud is a serious issue, and those Shkreli has misled possess every right to demand justice. But in all the noise and self-congratulatory hubbub about Shkreli’s arrest for securities fraud, there’s a very real danger that we lose sight of the real issue here: the pressing need for serious reform in how America (and thus, much of the rest of the world) does pharmacy and drug-selling.

Shkreli made his money (the non-Ponzi scheme parts of it, anyway) by exploiting FDA loopholes. Those loopholes still exist.

And ‘Big Pharma’ is probably quite pleased Shkreli’s now out of their game. His balls-out no-holds-barred approach to shameless profiteering by maliciously manipulating drug-prices is pretty much how many of the big guys in the industry make their millions anyway. The only difference was how brazen and bereft of sound PR Shkreli was about it.

Now that Shkreli’s presumably more worried about his own court-case than bailing out errant rappers from prison, he’ll presumably have less time, energy and effort to inadvertently and incandescently (to say nothing of “indecently”) highlight how the pharmaceutical industry operates.

That’s why Shkreli’s arrest *can’t* be the end of the conversation. We haven’t “won” anything – not really, at any rate. If anything, the fact he’s now in custody simply strengthens a perception being deliberately fostered by others in the pharmaceutical industry that Shkreli was a rogue and a ‘bad egg’ – rather than a shining, stinking embodiment of conscience-free profiteering to which they all blandly aspire; and to some extent partake in. Getting jubilant about his comeuppance changes the focus to minor-retribution rather than attempting to force real systemic change

So have a laugh at some of the many – and glorious – Shkreli-memes that are presently circulating the Internet. They’re quite funny – and needless to say, eminently well deserved.

But remember: Shkreli’s emphatically just the tip of the iceberg. He represents an extreme – but not the exception – of industry practice. And his arrest changes nothing.

For meaningful change to occur, the entire system needs to be put in the dock – not just one public bete-noir fraudster who got caught with his hand in the till. 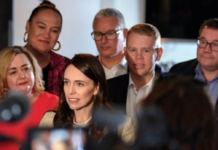 Why Haven’t They … ? How to Explain this Government’s Baffling Refusal to Solve New Zealand’s Problems. 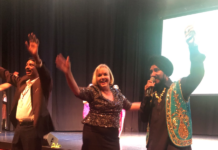