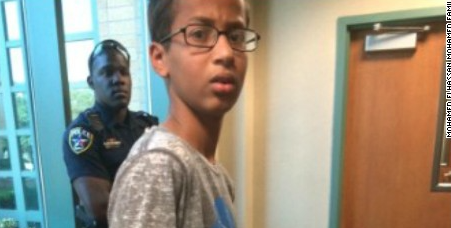 Ahmed Mohamed became famous for making a clock and getting in trouble for it.

The image of a confused young boy being handcuffed by police speaks volumes about the absurdity of the whole situation.

Literally all the kid wanted to do was impress his teacher, expecting praise from someone who knew him and how smart he was. Last I checked this wasn’t a crime. But it could be if you belong to a group that isn’t exactly the favourite of the day. His determination to follow his dream to keep inventing is a level of strength I wish I had. Anyone else simply would’ve given up for fear of constantly having to prove to the world that they should be treated as everyone else.

The international outpour of support is absolutely heart warming, but will his experience and his family’s response – they bought pizza for the media camped outside their house – do anything to shift the public perception about Muslims, particularly in the United States?

It could certainly improve, but as long as there’s a war to be fought, there will always be an enemy. ‘Othering’ of minority groups has always existed and as much as we hate it, it’s not going away anytime soon. Everyday people like Ahmed who are just trying to make it in the world like everyone else, will always pay a price for it.