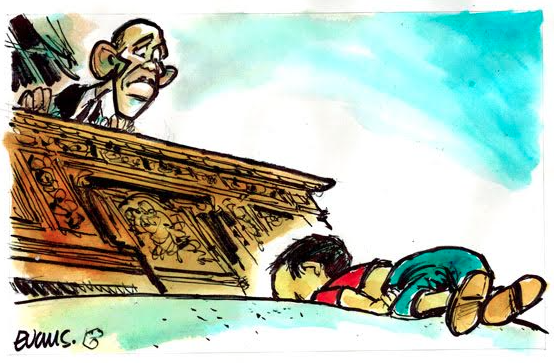 I do not want to see the photo again. You know the photo I am referring to. I do not need to describe it but I will. The small boy,  just a toddler, mimicking the repose of sleep, dead on the beach.  In the strange mediascape of our time it has been ‘liked’, it has been ‘shared’ and it has been reinvented into a thousand sentimental meme.  However, whether it be on Twitter or Facebook, in this instance, I believe it is time that social media followed the lead of main stream media and stopped using the pictures. The picture has done its work. To continue to use of this picture, no matter how noble the intent, can no longer be regarded as anything more than gratuitous.

Already the photo is being compared with other images. I have heard it compared with the one of the naked Vietnamese girl running from napalm and the picture of the starving Sudanese child being stalked by a vulture. I am familiar with both of the other images but today I realised with some disgust that in the case of the other images I do not know the names of the subjects featured and I know nothing of their back story. The images have become more famous and more revered than the facts and the stories they were supposed to bring to our notice.

The child on the beach is Aylan Kurdi. His brother was Galip, his mother Rehan and his father who survived is Abdullah. But even now that his name and circumstances are broadly known, media are still referring to him as ‘the body’, the ‘dead child’ and of course  the ‘tragic image’. They may in each report use his name, Aylan, once, but then they revert to referencing the image.

His short life is already being relegated to the background as the media, social media and the general public choose to frame his story.   I wonder what the effects of this are for his family. I wonder how neglecting to name Aylan, and immortalising his image will impacts on those grieving his loss. One of the most banal clichés we offer to the bereaved is that they should try and remember the happy times.  But if every memory of the person reminds you of the space caused by their loss, I think it may take a lifetime before you can remember the happiness and joy without it causing extreme pain. If the most prominent memory of that person becomes a single frame, which has circulated around the world becoming the defining  symbol of our inhumanity, I wonder how  that must impact on the process of grieving. How much longer will it be before you dare to allow yourself to remember the joy?

I know little of Aylan’s life before. I know he had a brother, a mother and a father and that he lost his life as his family attempted to flee a country being destroyed by war. They were trying to reach Canada. His mother and older brother died alongside him. His father has returned to Syria to bury them. That is not all we know.

No matter where you are living, or what language you speak, we all know that Aylan was a child who was loved and cherished. We know that when Aylan was a baby he would screw up his face and poke out his tongue as though he had tasted something he disliked. We know that when his father looked down at him, and held out his finger Aylan would grasp it in his tiny hand. We know that he cried when he was hungry and that his mother would feed him and soothe him making gentle noises. We know that sometimes when he laughed he gurgled, and that when he laughed his parents were so filled with love that their hearts actually hurt with the immense pressure and responsibility of that love.

So let us not continue to circulate the image. The image has done its work; it is indelibly etched in our minds and for every person who saw it and had a reaction, let it be a call to action.  Let us not immortalise an image, instead let us honour his life by demanding a response not just from our government but from each other.  Now is the time for the petty political point scoring to cease and all parties to agree that by whatever mechanisms required we respond.  Today John Key will announce that we are bringing extra refugees in above our 750 quota. We will be bringing in refugees from Syria. However we cant let our government forget, and what we ourselves can’ t loose sight of is that between New Zealand and Syria is Manus Island.

The need to double the quota of refugees for 2016 is a move that is long overdue. If we can find money for flags and shady sheep deals why can’t we honour Aylan by increasing the quota to 1500? It is still such an inadequate response to the 50 million people that are in need but at least here, in our country, we can ensure that the legacy of Aylans life is not just an image.

His name was Aylan Kurdi.