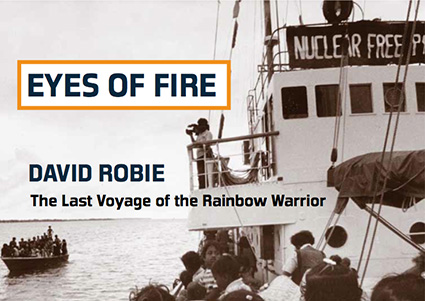 TODAY is the 30th anniversary of the Rainbow Warrior bombing in Auckland Harbour on 10 July 1985. TDB brings you Selwyn Manning’s wide-ranging interview on Evening Report with David Robie about the Rainbow Warrior’s Pacific voyage – its last – the Rongelap evacuation, the legacy of nuclear testing by the three nuclear powers in the Pacific and looking forward to the challenges of climate change.

The book launching of Eyes of Fire by outgoing Greenpeace New Zealand executive director Bunny McDiarmid, was at The Cloud on Queen’s Wharf , just near where the environmental campaign ship was bombed by French secret agents.