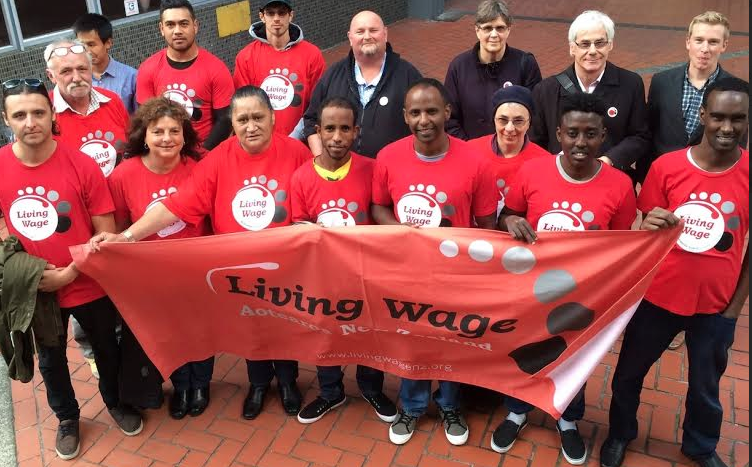 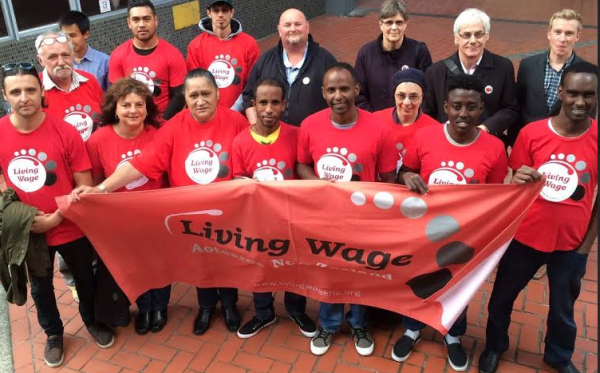 Three years after its launch, the Living Wage Movement Aotearoa is stronger than ever.

The initiative brings together unions, faith groups and community organisations that share the view that one of the best ways to tackle inequality in New Zealand is simply to bring up wages. Aotearoa’s campaign follows in the footsteps of many other living wage movements around the world that have been extremely successful.

The idea is straight forward. A living wage rate is calculated based on the cost of things like housing, groceries, transport, and childcare. The rate allows people to ‘live, not just exist’ and a bit of money is included for modest leisure activities, such as the occasional family trip to the movies.

The rate was originally calculated by the Family Centre social policy research unit in Lower Hutt to be $18.40. Since then, it has been adjusted based on movements in the average wage. The Aotearoa living wage rate is currently $19.25. The rate is calculated to be just right for a family with two kids, with one parent in full time work and another working 20 hours a week.

Predictable and rather boring criticisms of the calculation and adjustments have been voiced, almost always from people who seem to oppose wage rises by reflex. How can the rate adjustment be right, when variables in the original calculation have changed? If the rate is right for the example family, then isn’t it too much for a single worker with no dependents?

These arguments miss the point.

On the rate adjustment – the scientific calculation has never been what it’s about for me. If we accept that the minimum wage is too low, which is obvious, then we simply need to establish an aspirational rate to aim for. This should not be random, and the Family Centre’s work has established a solid starting point. But whether an adjusted rate is a few cents higher or lower than it otherwise would have been doesn’t make the argument to push wages up any less credible.

The rebuttal to the second criticism is also obvious. For every person that the new rate is ‘too much’ for, there are families for whom the rate is too little. This is an issue when most figures are established – whether that’s a minimum wage, or government entitlements, or doctors’ fees – whatever. And you ask a school leaver with no dependents who is working on the minimum wage if life is difficult, and if more money will help them get ahead. Guess what their answer is.

The point is: Wages need to be higher. Here’s a rate that would make life significantly better for low income earners. It’s a number we can campaign with, and a number we can set as a benchmark for employers who want to commit to be in the living wage-accredited club.

And the most beautiful part of the campaign? Becoming a living wage employer is voluntary. Employers choose to pay the living wage, whether that be because it’s morally the right thing to do, or because they have done the research and seen the positive effects of high wages on productivity and absenteeism, or simply because they want the extra business and kudos that comes with being known as a good employer. So the usual arguments against wage rises (harming small business, locking young people out of work and so on), while usually provably wrong, are this time completely irrelevant. In this way, paying a living wage can even be consistent with a free market ideology.

One organisation that has voluntarily committed to becoming a living wage employer is the Wellington City Council. Mayor Celia Wade-Brown and a majority of current councillors made the following commitment before the last local body elections:

They campaigned on this, they spoke at Living Wage Aotearoa events, they included reference to the living wage in their promotional materials, we mobilised a voter base – and these candidates won. So there is a clear commitment to paying decent wages from a majority on council, and they have not just a mandate but a democratic responsibility to do everything they can.

And in some ways, they have kept their word. They have started to pay a living wage to directly employed workers, and have even brought parking wardens in-house to lift them up to the rate. I was at an emotional council meeting in 2013 where WCC parking warden Esau Taniela spoke about incredibly hard work and long hours that still didn’t give him and his young family enough money to get by on. The council addressed it quite swiftly, and thanks in no small part to the Service and Food Workers Union and our committed members, WCC parking wardens are now on at least the 2013/2014 living wage rate $18.40. It’s a great start.

But now it’s time to go further, and the next step is to get our cleaners on a living wage as well. Cleaners are the unsung heroes of most workplaces. Their jobs are incredibly important – they keep us healthy, comfortable and organised. They do the tiring and sometimes disgusting tasks we don’t want to do ourselves. They often have to travel long distances, as you can’t live in the city you clean in on minimum wage.  And it’s pretty damn thankless work – cleaners work late at night, early in the morning or on weekends. When they do a good job, nobody notices. They are taken for granted.

The parking wardens won a living wage by campaigning hard, by getting in the faces of councillors and closely connecting their campaign to the strong local community movement. It’s now time to give the same support to the cleaners. While a majority of councillors have committed in principle to the living wage, political and administrative road blocks mean that we must keep the pressure on. It might mean a couple of bucks extra on your rates bill every year, which is a bargain for socially-minded folk whose happiness relies on the welfare of our most vulnerable workers. Supporting this movement means that when you settle into bed at night, if the workers still awake and cleaning offices cross your mind, you can rest easy knowing that you are doing your bit to get them on a fair wage.

And here’s one way to do your bit: attend the Mop March. We’re marching in Wellington from Wesley Methodist Church to the council buildings, Wednesday 24 June. The turnout at this willmake a difference as WCC consider extending the living wage to cleaners. Please join and share this Facebook event.

As with any campaign that aims high and has the corporate powers in our sights, the road ahead is long. But here’s one campaign that’s making clear progress by taking a new approach. Being involved in the movement is totally gratifying – because we’re winning. Come and win with us.

‘By building motivated, dedicated workforces, the living wage helps businesses to boost the bottom line and ensures that hard-working people who contribute to London’s success can enjoy a decent standard of living’

Sam Gribben is a Wellington-based activist and the Communications Coordinator for the Service and Food Workers Union. Twitter: @AotearoaSam