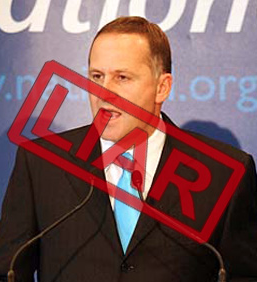 The New Zealand government continues to crawl to the demands of US corporates with our crown lawyers seeking to have Kim Dotcom’s bail revoked in a hearing at the Auckland District Court last Friday. (The hearing will continue this week)

It’s deeply embarrassing to have Meredith Connell lawyer Christine Gordon (acting for the New Zealand government) telling the hearing the United States wants the court to either send Dotcom back to prison or put an electronic bail system in place for him. So what? Why such servility to US requests?

The case against Dotcom has always been about how far the New Zealand government would bend over backwards to assist US corporates in a case of alleged copyright infringement.

And bend over double they did. The entire New Zealand state apparatus was put at the disposal of the US movie industry in the surreal attack on Dotcom’s mansion in January 2012.

Our own Hollywood imitator Peter Jackson could not have set a more dramatic scene with our spy agency the GCSB conducting covert illegal surveillance, dozens of police with camouflage gear, night vision goggles and automatic weapons, helicopters, searchlights and sirens.

A scene from a dramatized attack on the headquarters of a Columbian drug cartel perhaps? No. Just the arrest of a New Zealand permanent resident wanted by US corporates to face civil charges.

Like the Urewera raids where police and spy agencies spent up large from over-inflated “anti-terror” budgets to dramatise a terrorist threat there was more state stupidity and outright bungling in the Dotcom case than any concern for New Zealand.

It’s a situation where Hollywood is determined to make an example of Dotcom and deter others from running sites where possible copyright infringement could take place.

Unlike other cloud storage and sharing sites like Google and Dropbox, Dotcom’s Mega Upload cloud storage system was outside the control of the US corporate-approved sandpit where profits are circulated. So they went after Dotcom using Prime Minister John Key as their main man at the New Zealand end – someone ever keen to change our laws and throw tens of millions in taxpayer dollars into their back pockets.

In light of Key’s failures last week to recollect online conversations within 24 hours of them taking place it’s worth a look back at Key’s repeated denials he knew anything about Dotcom or the raid on his mansion beforehand.

Remember the “Moment of Truth” email from Warner Brothers CEO Kevin Tsujihara which blew Key’s denials out of the water?

When confronted with this email before the election Key’s response was not to say the email was a fraud but to say he had “no recollection of the conversation”.

This was clearly to be his long-planned line of defence to whatever the “moment of truth” might reveal – just as it is now his well-practised response to anything which might cause him embarrassment.

It was left to his friends at Warner Brothers to bail him out with the claim the email was a fake – duly taken up as gospel by the New Zealand Herald and the media generally and used to create the tsunami of negative publicity which engulfed the final days of the election campaign.

Whatever one thinks of Dotcom he is the victim of New Zealand’s state apparatus being misused for US corporate interests. The High Court questioned this intensively when the case for extradition was first brought to court. Let’s hope the District Court does the same.