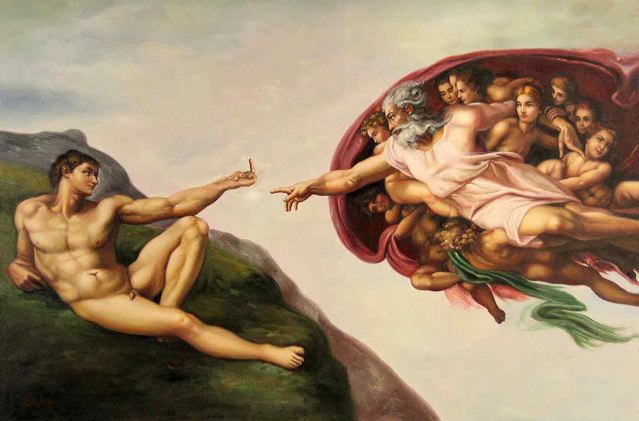 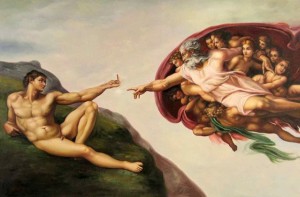 The meeting begins – or at least it’s supposed to begin – but someone interrupts proceedings. She wants everyone to pray with their heads bowed while she can “thank our Father who art in Heaven.” I close my eyes in disbelief and suddenly I’m right back there.

My legs are like lead. I can’t run. I’m wading through the ground. It’s like a scene out a cheesy movie chase, stretched out to milk the horror of getting to safety with the villain getting ever closer, looming larger in the rear view mirror. I’m a tiny figure superimposed on huge screen with death bearing down on me. It makes a terrible clatter and comes rolling endlessly towards me. It’s an old wooden escalator, so big it swallows the sky. It is the devil. Ahead of me is nice middle-class home sitting on top of a pole. It’s Heaven! I could reach there, if only my legs weren’t so heavy and the mud so deep.

I wake up, hot and sweating. I’ve pissed myself too. It pools under my bum, prevented from soaking into the mattress by a layer of red rubber. The birds haven’t started singing and it’s dark. I try to wriggle out of the puddle, but the stitched-in tapes under the arms of my pyjama jacket are tied securely to the bedframe. I’ve been like this since seven the night before. I’ll be released at 6am so I can go and pray for my salvation along with the other inmates. A red bucket of porridge will be brought from the kitchen to our dining area. It’s sometimes hard to eat, but I know not to openly buck the system. The yellow stick – a piece of broom handle – is used by the Sisters, mercifully sparing their hands from the pain of beating children.

The building in Island Bay was huge, ancient and made out of bricks. Inside it was falling apart and, for much of my time there, renovations were underway with workers welding reinforcing rods and brick and mortar dust coating everything. The welding went on, popping and cracking; pure Hell coming from the welding rods in a sight so terrible we weren’t even allowed to turn our terrified eyes towards the impending doom.

Inculcated into the dark Catholic religion, we had been taught to fear fire, for fire was what would have us for our sins. And fear it we did, for we knew we were sinners, every last one of us. We knew of eternity too. We knew that if there was a mighty rock towering out of the sea that was caressed with the tip of seagull’s wing every millennium, and that when it had worn down to nothing, eternity had only just begun.

I’m lying in the pool of piss, as usual, waiting for the dawn, longing to hear the chirp of sparrows; an aural ray of hope, signalling a new day and a change of clothes if not circumstance. I’m lying there, trapped in a rising miasma of piss and rubber funk. I’ve learned to tune it out, but it doesn’t work all the time. I remember my dream of being rescued by animals, not by humans. After that dream I longed for this. I longed to be here like this. They could tie me up and leave me here, but now I knew there was an escape. All I do is close my eyes and a world of infinite possibility is mine. I chose cats as my friends for I trust them. I’ve always felt an affinity with cats from my earliest days. I remembered their purrs, the exquisite, luxurious stretches as they put their paws on my skin. I remembered their scent, sweet and clean, the softness of their fur.

I contrast it with the chafe of my piss-soaked bonds and am grateful to at least be here in a place where I can close my eyes and run. I lie here in my trance, trying to keep it, trying to get back to the dream, trying to fend-off the inexorable creeping tide of loneliness; that feeling of insignificance, infinity and eternity. It’s like a light that gets smaller and smaller until it disappears. Like the receding pinprick of light on an old black and white TV. As focus is lost I feel the infinite blackness swallowing the light. All that is left is a velvet all-consuming black. I am overwhelmed by a feeling of remoteness and loss. So close yet so, so far. So far away that no part of my existence can be seen. I am no longer here. I am tiny and lost in a universe of sorrow.

There were about 15 of us in total, aged from three to five. Some went to school, but most of us remained, spending most of our incarceration in the yard. It required steady rain before we were let back inside and there was the ever-present yellow-painted piece of broom handle. Its ends were lovingly rounded and two thin bands of red paint as instruction to would-be-wielders indicated where it should be held.

It was if there was a good end and a bad end of the stick. The angel held it with one hand and beat the devil with the other. We all had that in common and no doubt as we lay there at night, the wicked ones tied if necessary, we all learned not to cry out, not because we had learned no one would come, but that we feared someone would.

I open my eyes and break the ugly video tape that’s been playing on the big screen of my mind. It’s been little more than a slow blink. I look around and among the sea of bowed heads, surrendered to Christianity, I see other heads raised with eyes shamelessly open. An eyebrow is flicked and the “look” circulates among we infidels in a second. Nothing needs to be said. We are rebels and will not be subject to demands for prayer. We will not bow our heads for their imaginary god.

Among the rebels are atheists, Sikhs, Buddhists, Muslims and, no doubt, other Antichrists like me. We all know the misery that has been inflicted in this Christian god’s name. There’s a smile from one. We’ve already had a discussion about how this Christian god is such a mean muthafucka that he nailed up his only son as a lesson to other wrongdoers. She’d laughed, as had I, but we’re not laughing now, as we sit, captive while Christians dominate proceedings.

The brutal scars of Christianity do not discriminate, but there is no doubt that that Christian fundamentalism has taken a great toll on the Rainbow community and followers of the Pope have been responsible for most of it. And while we might have freedom of religion in Aotearoa, were certainly don’t have freedom from it being jammed down our throats. I certainly don’t have the freedom to participate in a political process without being reminded of the god in whose name I was terrorised, beaten and abused.

These bible-bashing god-botherers have no greater claim on our time than Amway sellers or other marketers of snake oil. And, yet, even an organisation as broad and inclusive as the Labour Party allows these toxic wares to be purveyed at its meetings. That Christianity is given a favoured spot within a broad church such as Labour is an anathema. An organisation that provides a privileged place to one religion simply cannot call itself secular.

It’s time for us to remember that religious indoctrination has no place in State schools any more than it has in other secular organisations. It’s time we started treating people who would sell their brand at secular events with the same sympathy and understanding we treat any other travelling salespeople.