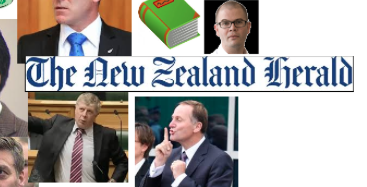 “Nothing to see here” Currie’s boss, Tim Murphy, tweeted on 19 June in response to questions about Immigration NZ’s speedy release the previous day of the now infamous  Cunliffe-Donghua Liu 2003 letter to his investigations editor, Jared Savage.

“We seek info, public service tells govt and denies us info. We refine request and get letters. We publish. Pretty standard.”

But there was nothing “standard” about the handling of this OIA request. Made at lunchtime on Monday June 16 it produced a response — which usually takes at least 20 working days —  within 48 hours. Plucked from a file and previously withheld on privacy grounds, the 11-year-old letter was immediately put to use by National’s frontbenchers in the debating  chamber and by the Parliamentary press gallery in the corridors to discredit Cunliffe and undermine his leadership of Labour’s caucus.

Although just a routine check on progress being made on  Donghua Liu’s residency application, signed by Cunliffe as New Lynn MP in March 2003, the letter was touted as evidence of support and advocacy for the controversial Chinese businessman.

For the Herald, it lent credibility to its investigation into allegations that Liu had made big donations to the Labour Party.

Jared Savage’s investigation had included a request on May 8 for all information that Immigration NZ held on Donghua Liu. After taking three weeks to decide to withhold everything on his file on privacy grounds, the ministry sat on that decision for another three weeks before suddenly agreeing to  release it to Mr Savage at 8.59AM on Monday 16 June.

Although no explanation was given for the sudden u-turn it is most likely that the potential for extracting maximum political advantage from releasing the Cunliffe/Donghua Liu letter became apparent over the preceding weekend.

The resignation of ACT leader John Banks as an MP had taken effect on the Friday (13 June). The filling of the vacancy created in Epsom required a special debate on whether to hold a by- election or wait for the general election on September 20. Gerry Brownlee decided to get it over with, scheduling it for Wednesday afternoon following the weekly General Debate. That meant National faced a torrid afternoon on Wednesday 18 June as Opposition parties combined to hang the Government’s dirty washing all around the debating chamber.

A  diversion would be handy.

First, the response to Mr Savage’s May 8 OIA request had to be cleared away and replaced by a fresh request targeted more precisely at the Cunliffe/Donghua Liu letter. Mr Savage obliged with an email seeking “any correspondence, including emails, letters or queries, from an Members of Parliament in regards to Donghua Liu’s immigration status prior to 2005.” The email was sent at 1.04pm on the Monday and asked for the request to be treated urgently because of “the public interest in this case.”

A growing army of managers, business advisors, comms people and consultants went straight to work on co-ordinating responses to the two requests. Ironically, although TV3 lodged their request sixty seven minutes after the Herald, Sabin was to scoop Savage by three minutes when the 2003 Cunliffe letter was released just under forty eight hours later at 12.49PM on Wednesday 18 June.

Twitter chatter in the hour leading up to the letter’s release reveals a small network of journalists and right-wing bloggers who knew it was coming. They had their stories already written and were waiting impatiently to hit “send”.

The 2003 Cunliffe-Liu letter has not yet been released at this point. No one outside of  Immigration NZ and Minister Woodhouse are supposedly aware of it’s existence. It would not be released for another thirty nine minutes.

At exactly the same moment, an unidentified staff member in the Immigration Minister’s Beehive office in Wellington emails across the Parliamentary complex to Cunliffe’s office with a heads-up. Two documents, Cunliffe’s 2003 letter and a similar one sent five months earlier from Labour’s Te Atatu MP, Chris Carter, are to be released to the media “around 1pm”.

12.12pm: Meanwhile, “Pete” is getting impatient. Described in his Twitter profile as “a fluffer, researcher, reporter, journalist, moderator and deputy editor” for Whale Oil Beef Hooked, “Pete” tweets back at Currie: “We’ve been waiting. Get on with it. #bloodyembargoes.”

12.23pm “Pete” is missing lunch. He asks @Inventory2 [Wanganui right-wing blogger and National Party member, Tony Stuart] and Currie if he has enough time to make himself a sandwich;

12.39pm: The Visa Services area manager reports that he’s “just been advised that the Ministerial consultation has been completed so we will proceed to release.”

12.42pm: The same area manager then emails 10 colleagues to report that the consultation process has been completed and the letters are being released. “I have also asked . . . when we can release the Brook Sabin OIA.”

12.49pm: A business advisor in the ministry’s “Operations Support” team emails scans of the signed response and the two letters to Jared Savage at the Herald. At this point the 2003 Cunliffe and 2002 Carter letters ‘officially’ become public.

12.53pm: Sabin posts a scan of the Cunliffe letter on TV3’s website with a story quoting extensively from it. His story appear four minutes after ImmigrationNZ release the 2003 Cunliffe and 2002 Carter letters to Savage.

12.55pm: “Pete” checks in. He’s had lunch and he’s hot to post the story he’s already written after hearing from Whale Oil. Currie gets the green light and, obviously unaware that the Herald has already been scooped by TV3, tweets “Big political story breaking now . . . what David Cunliffe knew and said about Donghua Liu.”

12.59pm: Blogger Keith Ng posts the Question and Answer transcript on Twitter, describing it as a “wicked sick burn.”

1.00pm: The Herald’s veteran political correspondent, John Armstrong, posts a comment on the Herald’s website saying Cunliffe “is in deep political trouble. So deep that his resignation  as Labour’s leader may now be very much in order”. Armstrong’s column is written and published on-line eleven minutes after Savage is emailed the 2003 Cunliffe and 2002 Carter letters.

1.46pm: Parliamentary Press Gallery accuse Cunliffe of lying and and being a hypocrite in 8-minute “stand-up” on his way into the debating chamber.

2.00pm: Cunliffe arrives in chamber, met by jeering from National benches. Ministers use the 2003 Cunliffe-Liu letter to attack the Labour leader’s credibility. Two of them (English and Woodhouse) quote directly from TV3’s Question and Answer transcript from the previous day.

8.04pm: Herald political editor, Audrey Young, in New York with the prime minister, reports that Key admitted knowledge of the Cunliffe/Donghua Liu letter for some weeks. She says Cunliffe’s denials that he wrote “any such letter” has “thrown his leadership into crisis.”

5.14pm: Herald deputy political editor, Claire Trevett, and political reporter, Adam Bennett, report that Woodhouse had confirmed that his office had informed the prime minister’s office of the letter’s existence within a few days of learning of it on 9 May, the day after Savage lodged his first OIA request — the first of three conflicting accounts from Woodhouse.

1. This was no ordinary scoop. This was a political dirty trick with journalists as willing participants when they should have been exposing it for what it was. Links between political operatives, bloggers and journalists are inevitable and revealed. Ultimately the credibility of mainstream news depends on  its objectivity, independence and accuracy.

2. While the last-minute scramble to publish the letter before 1pm on the Wednesday depended on its release to the Herald’s  investigations editor at 12.49pm, there is no record of its  release to TV3’s political reporter. There is no paper trail, except a few references in internal emails. If it didn’t come from the ministry, it must have come from the minister.

3. The production and circulation of the Question and Answer transcript, required to support the — false — claim that Cunliffe had lied or suffered serious memory loss, remains a mystery. Blogger Keith Ng’s instant judgment on it as a “wicked sick burn” is more than just a smart turn of phrase.

4. Nicky Hager’s chapter on the Cunliffe/Donghua letter in ‘Dirty Politics’ refers to a blogger called “Barnsley Bill”, who – on the day before the Cunliffe-Liu story “broke” on 18 June in the Herald –  made this cryptic remark on Danyl McLauchlan’s blog, “The Dim Post“;

Within 24 hours the poll are going to be the least of David Cunliffes problems.
Keep an eye on the herald website, we are about to see pledge card theft relegated to second place as the biggest labour funding scandal.

Followed the next day with this;

“Barnsley Bill’s” reference to “the 100k bottle of wine” was made before the Herald published allegations of Liu spending $100,000 on a bottle of wine to the Labour Party. (Allegations which have since been re-tracted by the Herald.)

Maintaining his cryptic game-playing,  “Barnsley Bill” referred on “The Daily Blog” to “look to Kerikeri for the leak” – which he pointedly repeated. Kerikeri is in the Northland Electorate. Northland is National MP, Mike Sabin’s electorate.

These are the people who knew about the 2003 Cunliffe letter before it was made public under  OIA requests on 18 June. Those OIA requests were ‘smoke-screens’ as TV3, NZ Herald, and Whaleoil already had the documents, or had been informed of their content.

Those letters were provided by the Office of the Minister for Immigration.

Under Savage’s OIA request there was a deliberate, pointed paper-trail trail by Ministry officials. No doubt the civil servants involved had an idea what their Minister was up to, and wanted plausible deniability in case any investigation resulted. By contrast, no such paper trail exists to explain how Brook Sabin obtained his copy of the 2003 Cunliffe letter. Minister Woodhouse was clumsy.

This could have come directly from the Minister’s office.

As the Twitter discussion and “Barnsley Bill’s” cryptic, prescient, comments  indicate, there were several people “in the loop” to what was clearly a calculated, planned, – if rushed – political trap and public smear campaign. Clearly, these people did not expect anyone to notice their public conversation.

Organised from a  Minister’s office; with involvement by Cameron Slater,  and with TV3 and NZ Herald complicity, David Cunliffe walked into that trap.

The truth is only now coming out.

Put the whole Twitter conversation together, and it is abundantly obvious that those involved knew that the story was coming out  prior to the Ministry releasing the 2003 Cunliffe and 2002 Carter letters.

Appreciation to ‘Hercules‘ for providing  information and filling in the gaps. Without your in-put, this story would never have come it.

Whaleoil: BREAKING – David Cunliffe’s career, such as it was, is over [ UPDATED ]

NZ Herald: John Armstrong: Cunliffe’s resignation may be in order

The Daily Blog: EXCLUSIVE: Was the Donghua Liu Affair another example of Dirty Politics?

The Donghua Liu Affair threatens to unravel – PM and NZ Herald caught up in a dirty trick campaign?

The Donghua Liu Affair: the impending final act and curtain-fall in this smear-campaign

The Donghua Liu Affair: The first step to a complaint to the Press Council

The Donghua Liu Affair: Evidence of Collusion between the NZ Herald and Immigration NZ?