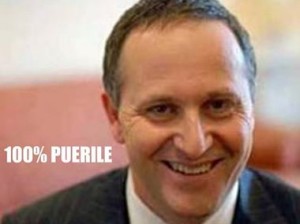 We’re into the second month of election year and, as Vernon Small reports on Stuff “National is riding a wave of soaring optimism to start election year in pole position. A new Fairfax Media-Ipsos poll puts National on 49.4 per cent against 31.8 per cent for Labour and 10 per cent for the Greens. On those numbers National would win 64 seats in a 123-seat parliament – a lead of 10 seats over the combined Labour-Green vote and easily enough to govern alone before minor parties are taken into account.”

Despite (Colin Craig might say because of) recent allegations that he is “a shapeshifting reptilian alien ushering humanity towards enslavement”, Mr Key remains highly popular. So popular in fact that reading between John Armstrong’s lines in the NZ Herald, resistance is futile and we might as well call the election already won. “Taking him on mano a mano is audacious, iconoclastic and forlorn.”

At the Big Gay Out, as is customary at such events, many took him on mano a mano and the PM, as he is wont at such events, was happy to be taken. Fetchingly attired in a lemon pastel polo shirt and shorts, the PM was warm, friendly and verrrrrrrrrrrrrrrrrrrrrrrrrrrrrry approachable, even downing several cups during a “beer pong” session. Next morning, he told the Herald he would “definitely” beat Labour Leader David Cunliffe at the drinking game. “Wouldn’t be any doubt about it,” the PM said. Not be outdone, Mr Cunliffe told media he would win a beer pong battle against Mr Key. “I could, I’m sure – if the moment arose – drink him under the table. I have body mass on my side,” the leader of the opposition said. Perhaps we should cancel the expensive and time-consuming election (with all those stupid votes to be counted and recounted) and just settle it, mano a mano, over a beer pong table. And if there was a tie? I guess they could always whip out the political genitals and at once resolve who has the majority.

But John Armstrong, who obviously knows about such things, alludes to the fact that the PM’s endowments are not merely financial. For example, “Mr Dotcom’s professional wrestling style has hit Mr Key’s Administration in the political genitals for nearly two years yet the Prime Minister’s approval soars on.” After two years of such pummelling, when most would be left with…well…’numb nuts’ I believe is the immortal phrase, the PM’s popularity soars on. Maybe that’s what we like in a politician?

Speaking of numb nuts, another rough beast, his hour come round again, slouched towards the Beehive this week. In the NZ Herald, the PM “hinted his tip-off about NZ First leader Winston Peter’s visits to the Dotcom mansion came from blogger Cameron Slater and said if a spy agency was found to be involved, as Peters has claimed, it would mean the end of his political career.” Luckily for the PM (Minister in charge of the SIS and GCSB), the intelligence came from a more reliable source. “He would not confirm it was Mr Slater, but said he did speak to Mr Slater “every so often,” and had called him earlier this week during which they briefly discussed Kim Dotcom. He said that did not mean he agreed with everything Mr Slater wrote on his blog. “I speak to lots of blogsters [sic].” Whether it’s true, or whether he’s just uneager to see (in Key’s words )”the end of myself as Prime Minister and the end of the Government.” or whether he’s just happy to roll in the mud, Slater said “if the Prime Minister says I’m a source, I guess I must have been.” Nothing could be more transparent, satisfactory or plausible.

When he’s not speaking to Mr Slater, it appears the PM is also taking time out to text his new BF Tony Abbott. As Tracy Watkins reports on Stuff, “A trans-Tasman romance appears to be blossoming following John Key’s second trip across the Tasman to meet up with his Australian counterpart,” Clearly his years as a monk have left Mr Abbott susceptible to bromance for his welcome was a gusher of geyser proportions. “Mr Abbott did not hold back, meanwhile, from expressing his admiration of Mr Key or his government’s reforms. Addressing a 600-strong business audience, Mr Abbott lavished so much praise on Mr Key he should have been blushing – brother, friend, soulmate, mentor and an inspiration were to name a few of his glowing tributes.” Bring me the baby wipes! The PM must have thought he was back at the Big Gay Pong Table. Winsomely, Key acknowledged their differences: “He’s more Right-wing than me; he can surf a lot better than I can; he’s deeply religious and I’m not; he’s a Rhodes scholar and I wasn’t.”

Sadly, these closer economic fellations proved to be all talk and “Mr Key left Australia with little to trumpet in the way of progress on the thorny expat question, or the Buy Australia campaign shutting out Kiwi exporters.” The PM’s new-found brother, friend and soul-mate has more important problems of his own to deal with at the moment, including the exodus of Holden and Toyota, the junk-bond status of Qantas, a drought and seemingly perpetual bush-fires. Not to mention Schappelle Corby. In the Sydney Morning Herald, Mike Carlton writes “As so often happens, the best the Prime Minister could do was to heap platitude upon banality.”

Poor Australia. Once, the lucky country. Once a country of which Men at Work sang of men who had work: the ‘land down under, where women glow and men plunder, can’t you hear, can’t you hear the thunder? You better run, you better take cover’ . And after Shane Jones extraordinary revelations in the House this week, Australians better take cover. Jones was talking ‘Tony’. Not Abbott. Soprano!

According to the Labour MP, the Australian-owned supermarket giant Countdown has been engaging in “Tony Soprano” extortion and racketeering practices, threatening to take New Zealand producers’ products off its shelves unless they pay back-dated cheques. “The Aussie driven owners and managers are saying to our Kiwi firms ‘you will hand over a cheque for my historic losses or you will never gain shelf space on the supermarket and if you breath one word of this we will blacklist you permanently’,” he said. “This monopolistic abuse, these threats and intimidation is driving our fellow Kiwis to their wits’ end. They have begun to fear now whether their businesses are viable,” To add fuel to the fire, as TVNZ reports, “the claims come amid an aggressive “buy Australian” campaign where a host of Kiwi products, such as fresh vegetables and cheese, have been stripped from Coles and Woolworth stores across Australia.”

As well-known flag-waver John Amstrong observed “Patriotism may be the last refuge of the scoundrel, but no New Zealand politician has ever lost votes in criticising the diggers over the Ditch” and Jones’ “carefully conceived, astutely timed and precisely targeted blitzkrieg-style offensive” pulled no punches.”I only hope my fellow citizens, consumers from all around the country say ‘we will not acquiesce with the importation of this corrupt culture from the Australian shareholders into our business environ. Stop threatening, stop your Mafioso tactics against Kiwi businesses, treat them with a decent shot. Give them a fair go and stop threatening them that they’ll be bankrupted or blacklisted if they squeak, as to this extortionary behaviour. Sir, this verges on corruption. I’ll go to Pak n’ Save because the Aussies should pack up and go home.”

So much for closer economic fellations. Lip Service! Mouth-honour! So much for brothers, friends and soulmates. When New Zealand suppliers have to join a witness protection programme to testify against their ‘Strine’ masters,  something is so rotten that no amount of Prime Ministerial grope-fests, platitudes or banality can cover the stench. And if we suffer under CER, how are we supposed to fare under the TPP?

I leave it to another great Aussie band, Icehouse:

‘So you look into the land and it will tell you a story
A story ’bout a journey ended long ago
If you listen to the motion of the wind in the mountains
Maybe you can hear them talking like I do
“. . they’re gonna betray, they’re gonna forget you
are you gonna let them take you over this way . .”
Great Southern Land, Great Southern Land.’