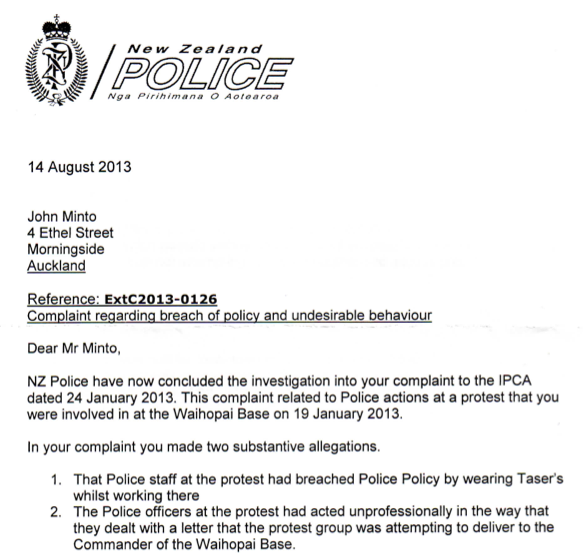 Two complaints I made on behalf of Global Peace and Justice Auckland about police misconduct at a protest at the GCSB’s Waihopai spybase in January this year have been upheld.

The annual protest near Blenheim is organised by the Anti-Bases Campaign and this year involved a group climbing over the gate and walking down the road with a letter to deliver to the base commander.

Four police (two wearing tasers) intervened and aggressively manhandled the group off the property knocking people over. In the midst of this the letter for delivery was seized by the sergeant in charge, screwed into a ball and tossed over his shoulder. All in a day’s work.

Our complaints were that the wearing of tasers when policing demonstrations is expressly prohibited by policy operating instructions and the sergeant’s behaviour was provocative, childish and pathetic.

When we first complained to the (so-called) Independent Police Conduct Authority they didn’t investigate but replied dismissing the complaint about the letter by saying they had spoken to the officer involved and took his word that he may have brushed it aside and it fell on the ground. We objected at the lack of investigation and the IPCA then sent it to the police to investigate. 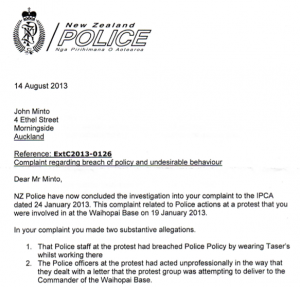 The result is this letter we received attached with this blog.

As far as I can recall in 35 or so years it’s the first ever police complaint I’ve been involved in which has been upheld.

Important Note:
The annual protest takes place early next year on 24-26 January – for more information you can email abc@chch.planet.org.nz and they will send you a notice…