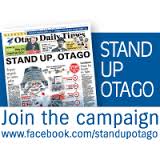 A couple of weeks ago, the Otago Daily Times decided that it had had enough of announced job losses in Dunedin, often at the hands of The Beehive’s great centralising scalpel, and screamed “Stand Up, Otago!” from the front page. It was a rallying cry, they said, for the whole of Dunedin to swing in behind and help save the City from going into an economic death spiral. It stirred memories of the 2010 campaign to retain neurosurgical services in Dunedin, also lead by the paper, where ~10,000 people answered their call and marched down George St (the campaign was ultimately successful). ‘We’re all in this together!’ was the prevailing message, we all need to do our bit to try and turn the city around, and I was excited about the potential of 120,000 of us spitballing ideas. What did we get? The Mayor called a meeting of Key Stakeholders from around the region, invite only, to discuss the proposed restructure at Invermay. Politicians, business leaders, trade unions and social agencies were all there for the Mayor’s photo opp, but the question remains: At what point do the people who live in and love this place get to become Key Stakeholders in the eyes of the Dunedin City Council? The All Hands On Deck rhetoric is meaningless if you then go and set up a two-tier consultation process where some opinions are declared more worthy of others, please submit your business card at the door.

This isn’t the first time we’ve seen this, either. When the DCC announced they were developing an Energy Plan, long overdue, the meeting they called to discuss the framework was again initially set down as an invite only Key Stakeholders affair, until Mayor Cull decided the public should be part of this process from the beginning and let us in. By this stage, the messages has been mixed and even some of the more brazen lobbyists in the audience were unsure if they were allowed to be there or not. We need to be tearing down barriers to public participation, not building them up! I’m sure the DCC think they’re saving everyone time and energy with these targeted meetings, but it too easily gives rise to perceptions of a Divide & Conquer Strategy (which we see deployed locally by international Oil & Gas giants, with the Council going along for the ride) or, at the very least, a system where the decisions are made by a powerful few and the rest of us are given some crayons to colour them in. Not only is that bad for our democracy, and encouraging people to be an active part of it, it is also a huge wasted opportunity. Nobody knows where the next Great Big Idea will come from, and anything we do to limit the chances of it being heard is ultimately negative.

The four little letters that can kill off communication might be GCSB, but if its consultation you want to put a boot into look no further than RSVP. That French flourish of a social convention has exclusivity built into its DNA, and exclusivity is a pox on participatory democracy. I know people who haven’t attended public meetings hosted by the DCC because they hadn’t RSVP’d by the date provided, and therefore wouldn’t be allowed in, or because the flier said RSVP, they assumed it was an invite only affair, and didn’t feel capable of waltzing on in there. Everyone should be welcome to any Council discussion at any time, with notable exceptions made for commercial sensitivity. Beyond that, it is the Council’s job to make sure that people know that! Voter turnout in Dunedin in 2010 was a tragically low 47%, and one of the best long term fixes for this is making more of an effort to openly engage with people between election campaigns. We can’t just sit back and wait for them to march on the Town Hall. We need to go out and talk to them.

It was heartening to see a packed Auckland Town Hall on Monday night, with tens of thousands tuned in online, not for a gig, but for a public meeting about an important issue of the day. It’s a shame it costs $10,000 to open it up, a prohibitive expense for most community groups or organisations, because there’s something about putting the Town back into the Town Hall that really appealed to me. We have seen it up and down the country, again with the Stop The GCSB Bill campaign, town centres and squares (and Octagons) hosting thousands of concerned citizens getting together to discuss their concerns and support each other. One of the byproducts of a country beginning to defend itself against its own Government has been the amount of public discourse in our public spaces. It was bleakly ironic to come out of The Human Scale at the NZIFF, an inspiring film about the need to put people ahead of cars in planning our cities, to find a Mini on a giant promotional pedestal in the heart of the city. I couldn’t have said it better myself. Closing the Octagon to vehicles, and making it a pleasant place to pass through and spend time in, would be a great step towards growing an active, engaged and enduring community right outside the door of the Dunedin City Council.

At least they won’t have to go as far to come out and talk to us.