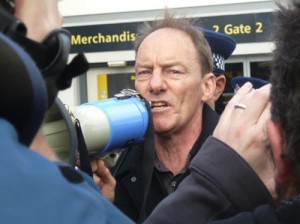 Mayoral candidates to square off across the picket line

Mayoral challenger John Minto will this morning square off against incumbent Mayor Len Brown across a picket line in Glen Innes.

The Mayor is scheduled to take part in the “turning of the sod” as the foundation of the first homes are dug to replace the state homes trucked out of Glen Innes.

It’s the sordid deal between Len Brown and the government to ethnically and socially cleanse Glen Innes on behalf of salivating property developers and wealthy home buyers.

The Mayor likes to tout himself as onside with “his” Maori and Pacific Island families but he’s helping drive these families from their homes in Glen Innes to create a seaside suburb for the wealthy.

It turns out “his” people are really the right-wing politicians and greedy developers who are trashing Maori and Pacific families.

Families who have lived in their homes for decades are being turned out and will eventually be housed in Len Brown’s high-rise slums down the road.

In the first stage of this “redevelopment” 156 state houses are to be replaced by just 78. Housing just got less affordable in Auckland.

In contrast to Len Brown’s “wealthy-first” housing policy Minto for Mayor’s housing policy will:
· Have the building of 20,000 affordable council rental homes underway in the next term of council.

· Require property speculators and property developers to pay the increase in value on land when council zoning changes inflate the land value. (“betterment” charges) This will provide hundreds of millions to be invested in additional affordable, high quality council rental properties

· Establish a “Charter of Rights” for Aucklanders in rental accommodation

The first sod will be turned at the Corner of Eastview Road and Castledine Crescent in Glen Innes at 10am.

PS:
Two days ago Building and Construction Minister Maurice Williamson said the government would increase compensation payments to private home owners where the government confiscated their land for major infrastructure projects such as roads. Williamson said families could be paid up to $50,000 (up from $2000 previously) to compensate for the major upheaval in their lives when they had lived often for decades in the same home in the same area. He talked about families changing suburbs, kids changing schools and the disruption to long-term relationships with friends and neighbours.

Fair enough. But what do state tenants get when they are booted out of homes they have lived in for decades? A free skip bin for the rubbish and a truck ride out.