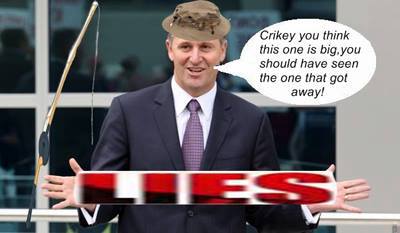 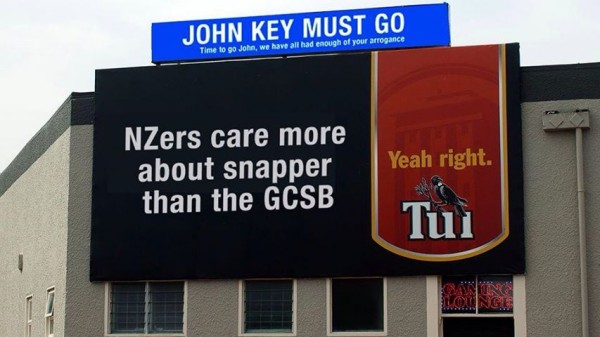 Turns out National’s slogan of a ‘Brighter Future’ was a spelling mistake, it’s supposed to read ‘Righter Future’.

The Government’s latest absurd GCSB distraction, Child Harm Prevention Orders, have become less of a smokescreen, and more of another disturbing nightmare of civil liberty abuses.

I love how Paula Bennett’s Welfare ‘white papers’ are always a blazing shade of red neck.

The problem of implementing Child Harm Prevention Orders against NZers who aren’t even convicted of a crime is that based on the balance of probabilities, a judgement could be made against you, to not only stay away from your child, but everyones child.

In America these types of laws have created the unintended consequence of pedophile tent camps where offenders can’t live anywhere near schools so live huddled together in tent camps on the fringes of society.

Imagine losing your child under a Child Harm Prevention Order and being required to move away from everyone else’s child not using the evidential threshold of beyond reasonable doubt, but the much, much, much lower threshold of balance of probabilities. Can you see how those powers could be horrifically abused in child custody cases that go sour? Remember, if you breach the order, it’s 3 years in prison!

I accept the current use of this type of power in domestic abuse cases, because there the person who is on the receiving end are only denied access to the direct whanau they are accused of hurting, under this plan the orders are universal.

Unbelievably, Key says “some of the civil liberty people” will be opposed to these new child abuse law changes. That’s because punishing people for crimes they aren’t convicted of are the actions of a dictator you crypto-fascist clown!

I’m proud to be one of those ‘civil liberty people’ who has a problem punishing individuals not found guilty of crimes. The eye watering ramifications of this nonsense are so bewilderingly stupid I’m waiting for reading to become an offense under this Government.

Apparently we need these sweeping new child abuse laws because 10 kids die per year. Hmmm, well 1000 NZers die each year from booze and the Government has moved heaven and hell to sit on their hands about any meaningful dent in those fatalities, so let’s get off the sanctimonious ‘public health’ moral high horse & see this for the GCSB distraction it really is.

I despise this Government’s casual fascism – can I make an advance vote for the 2014 election now? Key’s wide eyed arrogance and shrugging off of civil liberties with no regard for the wider consequences would be ethically bankrupt at the best of times, but to announce this because the Government are desperate to push the GCSB off the news agenda is a monstrous manipulation.