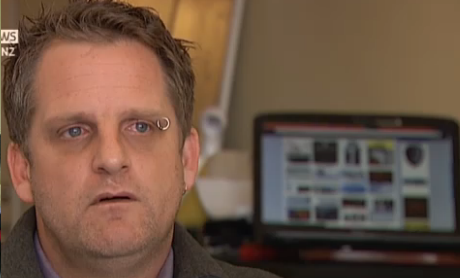 TV3’s Patrick Gower had this to say about the Maori Party, on 12 July,

“It needs the nuclear option.

It needs to kick National in the guts and walk away.

It’s time for Flavell to change the narrative.

He needs to position the Maori party differently – much differently. “Positioning” isn’t enough any more – he needs to make a break.“

Yeah, right. After five years of coalition with the Tories, all that the Maori Party has to do is walk away and all is forgiven?!

Never mind the damage they’ve done in the meantime?!

Never mind National’s Key’s rejection of the Waitangi Tribunal claim on water rights, in the light of SOE sales and the privatisation of water.

Never mind the support for National’s right wing policies that have “kicked Maori and the poor and dispossessed” in the guts?

No. That is simply not good enough. A political party doesn’t simply walk away from it’s responsibilities and track record and expect all to be forgiven at the following election.

The only “gut kicking” and “walking away” will be voters from the Maori Party. As it should be.

God knows that is the only sanction that voters have against  political parties that betray their interests.

So a vote for any prospective Pakeha Party will be a wasted vote.

Nice one, David; marginalising the racist vote in New Zealand. You’ve done the country a service.

The Pakeha Party has a website up and running. I haven’t read the whole thing, as I have more important things to do (paint is drying and needs to be studiously watched).

But this bit on their policy page caught my attention. Much of  it is badly written gibberish,  and is all over the place.  But note this bit,

In this modern age to the best of our ability we will abolish all racism and/or separatism within New Zealand setting an example for the rest of the world. We will ensure all races in New Zealand (particularly Maori) who have been a part of forming & establishing New Zealand and it’s history are well preserved, very cherished and heavily promoted wherever & whenever possible. This is a democratic society – the past is the past – no one should be handed anything for free these days based on their ethnicity. No guaranteed seats. No Maori only anything. We all have an equal opportunity in our geographic locations this day in age. To solve our issues we need to give a firm but motivational hand to the poverty stricken in the poverty stricken areas with low trade.

Maori will be “very cherished”…

Just what Maori need. Not a sound economic base upon which to create jobs and build their independence – but to be “cherished”.

Will that involve Mr Ruck and his  supporters giving them each a hug and a cuddle?!

And what does “the past is the past – no one should be handed anything for free these days based on their ethnicity” – mean?!?!

What are Maori being “ handed …  for free these days based on their ethnicity?!

Is Mr Ruck (or whoever wrote this childish garbage) referring to Treaty settlements? Is he referring to land that was illegally confiscated by the Crown or settlers in the 1800s, and even the early 1900s?

Is he referring to scholarships awarded to Maori youth, to attend University. Scholarships that are paid by IWI and not the taxpayer?

It’s hard to know. He doesn’t tell us. (I guess it can be all things to all people.)

Though if Mr Ruck  refers toThe Treaty as “the past is the past“, I wonder if he’d dare say the same thing to our American cuzzies about their Constitution, which was enacted 51 years earlier than the Treaty of Waitangi?

Or would he suggest that the Magna Carta – signed 625 years prior to the Treaty – the basis upon which our judicial and civil  freedoms are based on – is also “the past is the past“?

If  Mr Ruck and his followers maintain that the Treaty is out-dated – I look forward to them pointing to the document’s expiry date.

It’s fairly obvious that Mr Ruck and his supporters all hold one thing in common – a shocking and tragic   lack of understanding of history and only a cursory knowledge the Treaty settlements process. They hold to the erroneous belief that Maori are being handed [land and money] for free.

A little knowledge is a dangerous thing,  said Albert Einstein. For good reason;  55,495 do not know our own history and the acts of violence that stripped Maori of their lands and possesson – and benefitted  white colonials in the process.

One Law For All is the Pakeha Party’s slogan.

We can start with returning that which was stolen from Maori.

SkyCity chief executive Nigel Morrison has been having a bit of a whinge about community and political opposition to an agreement which which see a deal between National and the casino;

Key features of the SkyCity convention centre deal and what KordaMentha estimates they’re worth over 35 years:

* *Includes allowing up to 17 per cent of pokie machines and automatic table games (in restricted areas only) being able to accept banknotes of denominations greater than $20.

SkyCity chief executive Nigel Morrison says his casino’s pokies are only to blame for a minuscule amount of gambling harm, instead placing the blame on Lotto and the TAB.

Yesterday a bill allowing SkyCity to install hundreds more pokies and gaming tables and operate until 2048, in exchange for building a $400 million convention centre, passed its first reading 61-59.

It was supposed to be a conscience vote, but MPs voted along party lines, as expected.

Gambling support groups and the Opposition say the move will create more problem gamblers, but the Government has always maintained the economic benefits outweigh any potential harm – and Mr Morrison agrees.

Appearing on Firstline this morning, Mr Morrison said SkyCity’s contribution to gambling harm has been blown “way out of context”.

The Dept of Internal Affairs pointed out, when reporting on problem gambling,

At any given time, between 0.3% and 1.8% of adults living in the community
in New Zealand are likely to score as problem gamblers on standard
questionnaires. This is between about 10,000 and 60,000 people.

Yet, when it comes to problem gambling for outlets such as Lotto,

Around 20% of adults in New Zealand do not gamble. Most of those who do
gamble play Lotto, which is relatively low risk for problem gambling. It is
likely that fewer than 2% of those who only play Lotto will score as problem
gamblers, even if they play it every week.

It’s the old “my evil is less than other evils, so that makes me ok” argument. Taking this circular logic to it’s mad conclusion, no one could do anything to address a problem, because someone else will point further down the “food-chain” as being “worse”.

As Morrison himself said,

“The Ministry of Health does a report, and it shows the incidence of harm and problem gambling as a proportion of New Zealand adults is about 0.4 percent – that compares to drinking of 18 percent. The whole perspective of this debate has just been taken way out of context.”

It is so insane that one wonders how the human race could have evolved from their lemur-like ancestors because nothing would ever be achieved.

However, I think Morrison has little to complain about. Since 1995, the gross amount gambled at casinos is estimated to have risen 13.5 times since 1995;

Morrison points to the TAB and Lotto  as being “my evil is less than other evils, so that makes me ok”;

Yet, Internal Affairs data shows Morrison  to be less than honest on this matter,

So business is pretty damned good for an industry that is basically parasitic; non-productive; and causes considerable family disruption and social harm. In terms of destructiveness, it is right up there with alcohol abuse and hard drug addiction.

Morrison is a lucky man. He is getting a good deal from Key and his ministerial cronies.

It is no secret that National is so desperate to generate economic growth and job creation that they are willing to tolerate problem gambling mushroom as a result of more gaming machines and tables. This is a shabby government that is willing to turn a blind eye to social harm and shattered families.

Morrison says  it is not for his  company to interfere in the democratic process,

“It’s going to be what it’s going to be. It’s not for us to interfere in it – we’re just a corporate citizen trying to go forward in New Zealand.”

Those who know the full story of secret dealings between Key and Skycity will laugh with derision at Morrison’s comments. All along this has been a corrupt, shabby arrangement between National and Skycity – made even worse as Key tries to bind future governments to this deal.

Now he’s pissed off that more and more New Zealanders are becoming concious of this shonkey deal and questioning it?

Well,  more and more people are  not liking what they’re seeing.

You can bet on it, Mr Morrison.

If the National-sponsored  New Zealand International Convention Centre Bill is passed in law,  the convention centre is expected to be completed in 2017.

Contrast that to the Auckland rail loop which Key wants to start in 2020.

This is symbolic of the National government’s priorities.

There is unholy urgency to implement a law to  build a convention centre,  with attendent increased gambling,  and predicted increase in gambling harm.

But no great hurry or sense of urgency to build public transport to free up Auckland’s roads from gridlock.

This, to me, illustrates why New Zealand will always continue to lag behind Australia and other developed nations – because a segment of the population will always continue make bad choices and vote, unthinkingly, for political parties that have short-term views for our country.

It will be interesting to see what priority Aucklands voters have in 2014 (if not earlier). What will they vote for?

For Aucklanders,  all I’ll say is,

Your city; your choice; your consequences.

John Key, Prime Minister, and Minister of Tourism is busy working on his portfolio.

He is promoting tourism.

In Singapore, where he is on holiday.

Nice one, John. Good to see you have such faith in our own tourism sector.