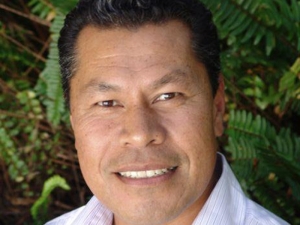 In my last blog I reflected on the need for a shift in society’s attitudes in order to achieve diversity – the kind of diversity that enables people of all backgrounds and cultures to participate in the system of democracy. It was to my excitement last week then, to hear of Rev Uesifili Unasa’s decision to stand for Auckland Mayor. To many in the Pacific community his announcement came as a bit of a surprise because it was unexpected. Having listened to a week’s worth of talkback on community radio and had many discussions with people at church functions, I can say with confidence that he has huge support that is rapidly growing.

Unasa is currently the chairperson of the inaugural Pacific Peoples Advisory Panel to Auckland Council. He served as a Methodist church minister in Mangere for a number of years and is also a chaplain at Auckland University. His role with the Pacific Advisory Panel to Council gives him a unique insight of the mechanics of Council and further appreciation of how challenging it is for minority groups to have their voices heard. He knows first-hand that these advisory are great as a means of consulting the community, but is aware that they have no ‘bite’ when it comes to genuinely influencing Council policy. Unasa is a strong leader whose style is inclusive, consultative and fair. At a guess, he’s standing because he’s had a gutsful of trying to impress on Council the needs of the community via an advisory panel that they don’t have to listen to.

I tuned into night time, community talkback with interest last week. Being Samoan, I was interested in how people would receive the news of him standing for a number of reasons – how Pasifika people would take to an ordained Minister seeking public office and the possibility of tall poppy syndrome. I was overwhelmed by the response he got on radio. Numerous people calling in to ask how they could support the campaign if they lived outside of Auckland, how they could donate to the campaign and asking why it had taken so long for a person of Pacific heritage to stand for this office. Of greater interest to me, was the amount of emotion that people shared – the deep sense of pride that Unasa standing was in a way, a coming of age for migrant, minority community in NZ.
People have told me that elections are long, tiring affairs that shouldn’t be taken lightly. I have heard their hints and told them that I know for a fact that he is serious. Others have asked me if Unasa is ready to become Mayor of the supercity. Of course he is… but that’s not the best question because it’s still mixed with a spoonful of deficit-thinking. This mayoral election will be about whether Auckland is ready for Unasa.