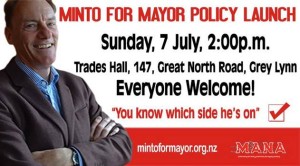 The Minto for Mayor campaign will get underway with a big bold policy announcement tomorrow (Sunday 7th) to dramatically improve quality of life for Aucklanders. (launch details below)

It’s a policy to give back to Aucklanders an extra hour at home with their families each work day rather than spend it in bumper to bumper traffic on Auckland’s clogged roadways.

Saving money while solving one of Auckland’s biggest headaches is at the front of the smart solution-based policies which Mana will be presenting to Aucklanders this election.

We will be giving the media every reason to report a policy-focused campaign rather than an expensive media-spun PR campaign.

All media warmly welcomed to the launch.

(PS: I’ve promised to bake scones for afternoon tea after this launch – with cream and jam. The Herald may regard this as “treating” but we’ll turn a blind eye to any journalist tucking in)