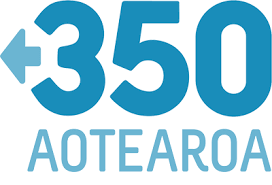 Climate justice organisation 350 Aotearoa welcomes the improvements to default Kiwisaver funds announced today by the government, which mean New Zealanders’ savings in default funds will no longer be invested in fossil fuels.

This change will mean that the 381,000 New Zealanders enrolled in default funds will be moving away from funds with investments in the fossil fuel industry, and into funds that have cut their ties with companies involved with coal, oil, and gas production.

“The changes to default Kiwisaver standards reflect the power of citizens coming together to demand climate action. New Zealanders do not want their savings associated with the fossil fuel industry that is most responsible for emissions causing the climate crisis,” said Erica Finnie, Executive Director of 350 Aotearoa.

From November 2019 – February 2020, as the government reviewed the default Kiwisaver scheme, 350 Aotearoa mobilised 1,300 New Zealanders to write letters to Hon Grant Robertson & Hon Kris Faafoi calling on the government to put the urgency of the climate crisis at the heart of their decision to change Kiwisaver settings, and ensure that all default funds will (need to) be fossil fuel free.

Finnie said, “It’s fantastic to see providers such as Westpac New Zealand (managed by BT Funds Management), that previously had significant investments in coal, oil, and gas companies, implementing a comprehensive exclusion from fossil fuel companies across all Westpac KiwiSaver Schemes, Westpac Active Unit Trusts and Premium Investment Funds. This is a great example of government policy aligning with public will to support private companies to meet an ethical standard to ensure that New Zealanders’ savings aren’t unknowingly being invested in harmful industries.”

“It’s also great to see that Kiwisaver providers that haven’t aligned to meet the new default fund standards will no longer benefit from the large customer base that comes with being default Kiwisaver providers. ANZ and ASB banks continue to have the largest lending portfolio to fossil fuel companies of all our banks in Aotearoa. The banks’ failure to align with responsible investment standards and divest from fossil fuel companies will impact their ability to remain competitive. Our banks and investment funds in Aotearoa need to embrace a responsible investment approach and divest from the industries causing harm in our society.”

350 Aotearoa is concerned the Kiwisaver providers can align their default funds with the new standards while continuing to manage unethical investments in fossil fuels in their other funds. This means if a customer switches from the default balanced fund to a growth or a conservative fund with the same provider, they risk investing their Kiwisaver in fossil fuels.