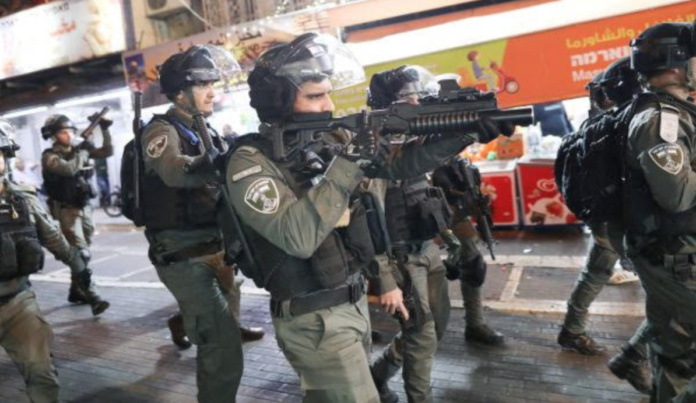 This year, Israel has been imposing increasing violations of both Christian and Muslim worshippers’ rights of access to their holy sites in Jerusalem. On 1 May, in the alley approaching the Church of the Holy Sepulchre, Occupation forces assaulted almost everyone, including monks, upon their arrival for Saturday prayer. Something of the ideological conviction that drives the Zionist regime’s behaviour was revealed by the Israeli newspaper Haaretz, reporting Benjamin Netanyahu‘s claim that Jerusalem has been the capital of the nation of the Jewish people for thousands of years. Israeli Government policy is the maintenance of Jewish-Israeli control over demographics, political power, land and the imposition of oppressive limitations on Palestinian residency rights by means of its civil law. However, whether Israel likes it or not, annexed East Jerusalem is recognised, under international law, as militarily-Occupied territory.

Netanyahu’s Zionist fantasy led him to claim in this 2017 BBC video not only that “Jerusalem’s the capital of Israel” but also that “it’s been the capital of Israel for 3,000 years”! In January 2020, he greeted US President Donald Trump’s ‘Peace to Prosperity’ hoax with joy, declaring that “Israel will retain security control in the entire area west of the Jordan River”. Cruelly dismissing the victims of Zionist apartheid, he went on to assert “the Palestinian refugee problem must be solved outside the State of Israel.”

Mounting Israeli Occupation violence saw 205 Palestinians injured when Israeli police stormed Jerusalem’s Al-Aqsa Mosque on the Holy Night of Laylat al-Qadr. Intensified oppression since the start of Ramadan, and the looming threat to Palestinians of evictions from their homes in East Jerusalem, is provoking growing anger. The population faces constant threats of eviction and loss of land, due to the land-grabbing demands of illegal Jewish settlers, backed by the invasive Zionist regime. On 22 April, hundreds of Zionist Jews marched through the Old City, accompanied by Israeli police, chanting “Death to Arabs!” In Israel itself, Guardian newspaper website TV footage, taken on 12 May, shows Israeli air strikes in Gaza, followed by a gang of racist Israelis in a Tel Aviv suburb dragging a man they suspect of being Arab from his car and beating him into unconsciousness. In the same suburb, another mob, dressed in black, smashed the windows of an Arab-owned ice-cream shop and more racists could be seen, on live television, chanting “Death to Arabs!”

When mainstream news media report Palestinian acts of Resistance, they do so in terms of “cycles of violence”. Misleading statements, by some Western powers, also attempt to convey the impression that the massively well-equipped Israeli invaders and their defenceless victims are equally responsible for any violence. The European Union, for instance, stated: “Violence and incitement are unacceptable and the perpetrators on all sides must be held accountable”. The United States said it was “deeply concerned” about the events and called on all sides to work to de-escalate them.

The Spokesperson for the UN High Commissioner for Human Rights (OHCR), Rupert Colville, brought the world back to reality by urging Israel to call off any forced evictions and warned that its actions could amount to war crimes: “We wish to emphasise that East Jerusalem remains part of the occupied Palestinian territory, in which international humanitarian law applies,” he said. In Sheikh Jarrah, Palestinian families are to be evicted from the homes they have lived in for 70 years, in order to make way for Israeli settlers. With regard to these dispossessions, the OCHA statement affirmed that “The occupying power . . . cannot confiscate private property in occupied territory.” Jewish Voice for Peace (JVP), an Israeli human rights organisation, has declared its support for Palestinian families and asks people to sign its petition – ‘Stop Israel’s illegal expulsion of Palestinians in Jerusalem‘. Even some US senators have condemned the evictions.

The horrific truth is that the Zionist strategy is to slowly uproot the native population. The threat of oppressive military Occupation violence is a constant and ominous reality in the daily lives of Palestinian residents. Ramadan is a special time for Muslims and, in Jerusalem, the festivity for families and friends is deeply felt. The night-time celebrations are greater than those seen at any other time of the year. But, inevitably, the occasion has also become an opportunity for the Israeli Occupation to ruin the festivities and kill all joy. To some, the Israeli intention emerged on the day before the start of Ramadan. For no apparent reason, the space, benches and steps around the Damascus Gate Plaza were barricaded and the Damascus Gate militarised. The provocative Israeli decision to prevent West Bank Palestinians from visiting Jerusalem to pray at Al-Aqsa added to the frustration. Acts of Palestinian Resistance have been met with two weeks or so of Israeli brutality, with youth beaten, hammered with stun grenades and soaked with foul-smelling ‘skunk‘. The Palestine Red Crescent ambulance service said one of those injured lost an eye, two suffered serious head wounds and two had their jaws fractured. Most were wounded in the face and eyes by rubber-coated rounds and shrapnel from stun grenades. While all this was going on, other Jerusalem residents were facing dispossession.

The UN High Commissioner has also demanded that Israel halt its coercive behaviour in attempting forcible transfer, saying: “We further call on Israel to respect freedom of expression on assembly, including with those who are protesting against the evictions”. On 9 May, the Palestine Solidarity Network Aotearoa (PSNA) wrote to Minister of Foreign Affairs, Nanaia Mahuta, urging our Government to speak out “with a strong, clear voice”, avoiding anaemic language such as the call for ‘restraint on both sides’.

On 12 May, in the UK Parliament, lawmakers set an example to the world in an Early Day Motion calling for the House to condemn Israeli brutality in East Jerusalem and Gaza. The Parliamentary motion notes that: there is no comparison between state-orchestrated violence perpetrated by a military and civil power with legitimate protest by civilians, or even retaliatory attacks by militant organisations; reaffirms its calls for peace in the area; and calls on the Government to unequivocally condemn Israeli actions and push for the upholding of international law.

On 13 May, the NZ human rights organisation, Foundation Against Islamophobia and Racism, published a Press Release condemning Israeli aggression and noting Israel’s plan to “forcibly remove Palestinians from their own rightful land.” The Foundation calls upon the Prime Minister of New Zealand, Jacinda Ardern, as well as the Minister of Foreign Affairs, Nanaia Mahuta, to condemn these attacks and calls also for a “Parliamentary motion designating Israel as an apartheid state based on the recent findings of a Human Rights Watch investigation”.

Also on 13 May, the Palestine Solidarity Network Aotearoa (PSNA) Chair, John Minto, took our Foreign Affairs Minister to task over her blaming both sides Tweet concerning Israel’s present escalation of violent human rights violations. He called for the Government to make demands for the ending of the Israeli occupation of Palestinian land (UN Security Council resolution 242), the right of return for Palestinian refugees expelled by Israeli militias (UN General Assembly resolution 194), an end to the more than 65 laws discriminating against Palestinian Israelis (the crime of Apartheid, as defined by the 2002 Rome Statute of the International Criminal Court) and the building of Jewish-only settlements on Palestinian land (UN Security Council resolution 2334, co-sponsored by New Zealand), which violate Article 49 of the Fourth Geneva Convention and also constitute a war crime under the Rome Statute of the International Criminal Court. Minto ended with a reminder to the Government that it should, in addition, back up these demands with sanctions against Israel until it ends its denial of Palestinian human rights.

As at Noon, 13 May 2021, OCHA reports that, since 10 May, 83 Palestinians have been killed in Gaza and 487 injured. Also Israeli attacks caused extensive damage to residential and commercial buildings, schools and infrastructure, such as roads, electricity network and water installations and farmland. Besides which, in Israel, seven people have been killed, including two children, and 281 injured. In Gaza, 500 homes were destroyed or severely damaged, with minor damage also to at least 2,100 more homes. The report notes that 14 residential towers were destroyed, along with 23 schools. Shelling by the Israeli Army has severely or partially damaged a number of primary health-care clinics and there are severe shortages of water and electricity. Israel has ordered a halt to all fishing around Gaza. Over 1,500 missiles have been fired from Gaza towards Israel since 10 May, with a significant number landing short inside Gaza. In Israel, Palestinian rocket fire killed six civilians, including three women, a girl and a boy; hundreds have been injured. On 12 May, a soldier at an Israeli Army position behind the Green Line was killed by an anti-tank missile fired by the Palestinian Resistance.

Israel’s allies, including our Five Eyes partners, frequently dismiss Israel’s inhuman behaviour by simply claiming that Israel has a right to defend itself. Yet never do they acknowledge that the Palestinian people also have right to self-defence. An unarmed population can be constantly beaten-back and humiliated but the people have a universally-recognised right to resist oppression and foreign occupation of their land. Any community would fight back. Israel’s vast military superiority enables it to control and determine so much. Palestinian protesters who march and throw stones are met with tear gas, stun grenades, rubber-coated bullets and, of course, fire with live ammunition. What the mainstream news media insist on calling ‘rubber bullets’ are, in fact, bullets that, although coated, are still tough enough to destroy internal organs and remove eyes. This is not defence of the Israeli state given to them by the West through the United Nations, the killing and destruction are done to maintain the Zionist grip on seized and annexed Palestinian land beyond Israel’s borders.

The Holy Night of Laylat al-Qadr coincided with the Zionist ‘Jerusalem Day’, actually the anniversary of the Israeli Occupation of East Jerusalem. With a new generation of Palestinian youth, the present revolt is not surprising. As a Palestinian resident, Jalal Abukhater, tells us: “we will not passively watch on. Israel does its best to make life for Jerusalem’s Palestinians a misery and a constant struggle. It does everything to make us disappear. But we will not. Every day, we face police brutality, arrests, home evictions and demolitions, impoverishment and a denial of basic human rights. The occupier’s violence is a permanent feature of our lives. But we are determined to fight for our city and remain, no matter what Israel does in its tireless effort to erase us.”

It is human nature — and also an inherent right to resist.