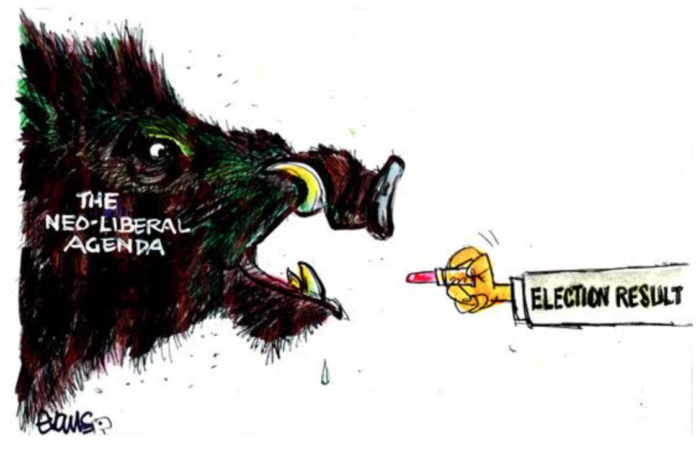 The dust has cleared. New Zealand’s electoral map and parliamentary chamber have changed decisively. Labour Red prevails and is able to legislate without impediment. Is this a victory for the Left? Is a transformative policy programme likely? Is the Right in disarray? My answers here will be “sort of”, “not really” and “partly”, respectively. These judgments arise from the following argument.

There are two ideological axes running at right angles to each other. The economic axis runs from Marxism, socialism and social democracy to neoliberalism and market libertarianism. These ideological positions stretch from Left to Right, the various standpoints in between span across the centre (as in centre-Left, centrist, centre-Right). The other axis incorporates moral issues and social rights in relation to race, culture, gender, sexual orientation, alcohol/drug use and religious belief. Here, the continuum stretches from radical social liberalism to extreme moral conservatism. Some journalists, commentators and naïve activists define Left and Right according to the second axis rather than the first. For reasons of clarity, I will not do so here.

The two axes form a quadrant which allows us to ideologically position political parties and politicians. Evaluation of their performance can proceed on this basis. On the second axis, election results are crystal clear. Most politicians and voters are committed social liberals on homosexual rights, same sex marriage, civil unions, abortion, women’s rights, church and state, secularism and so on. True, transgender autonomy and cannabis law reform remain contentious issues, but moral fundamentalism has been electorally defeated. NZ First has gone, the New Conservatives received only 1.5% of the popular vote. By contrast, Labour and the Greens, whose MPs are mostly social liberal, received a combined 56.6% of the popular vote, before specials.

Clearly, this is positive news for social liberal progressives, but it does not constitute a Left victory. Well-off, National-lite voters who went over to Jacinda in droves are not on the Left end of our economic axis. Their voting decisions arose from the well-founded belief that Labour’s COVID management strategy had kept New Zealand safe and relatively secure. Now, this sense of security also reflects economic self-interest. The National-lite switchers knew that an effective public health response, notwithstanding the lockdowns, would keep their investments safe too. Our Prime Minister is acutely aware of this. Anything more than a minimal rise in the top income tax rate, any suggestion of a wealth tax then those new Labour supporters will be gone. Remember that critical moment in the election campaign when Jacinda drew away from wanting a fall in house prices? Many of the National-lites own more than one property and happily manipulate the tax deductibility associated with property investment. For Labour, governing on the basis of national unity means keeping these people in the tent.

Meanwhile, out on the economic right, the ACT party channels the ghost of Ayn Rand—income tax cuts, corporate tax cuts, austerity programmes and a moratorium on the minimum wage is selfish and heartless. It is also more extreme on the economic Right than, say, the Green’s wealth tax and the guaranteed minimum income policies on the economic Left. Along the economic axis, the right-wing vote is fragmented, but this could change once the National Party reorganises itself.

The Green’s economic policies are furthest to the Left and reflect the worldwide eco-socialist commitment to low-carbon, New Deal policies. This is where a Left transformation programme should start. It won’t come from the government or the Labour caucus. Rather, Chloe Swarbrick’s extraordinary campaign in Auckland Central is the template. Build an activist milieu around voter enrolment and electorate issues and harness a sense of injustice against the political status quo. I am reminded here of the Alliance’s Auckland regional-local body victory in 1991 and Sandra Lee’s successful Auckland Central campaign in the 1993 general election. With 10 MPs and ready media access, the Green’s should build their activist base across the country for 2023. Labour will need the Greens if the National-lites prove to be fair weather friends.

The key priority for Màori politics is to combine axes one and two i.e., economic rights and cultural rights. From 1984, the historic injustices of colonialism converged with the neoliberal decimation of the Maori working class. These two factors together are why Màori statistics in health, employment, housing and prisons are so horrific. A centrist Labour government does not have the capacity to deliver solutions without alienating the National-lites. I was thus heartened by the Màori Party’s challenge to Labour’s Màori seat hegemony.

In sum, the ideological pattern of the 2020 election result looks like this. Secular social liberalism prevails. The so-called centre on our economic axis is quite bourgeois and a long way from Green, New Deal transformation. However, the parliamentary numbers and Swarbrick’s Auckland Central campaign provides opportunities for progressive activists. Mobilise new supporters around an eco-Left programme and pull the centre to the Left. National and Act can twist in the wind.