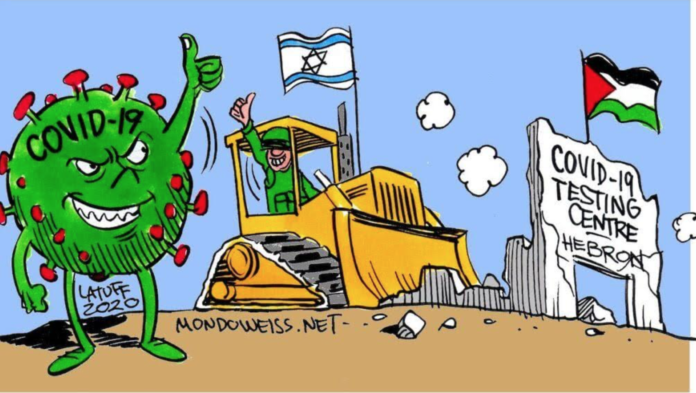 The whole world, every country on every continent,  is  preoccupied with taking desperate steps to protect their own people from Covid-19, is preoccupied with worries about how their societies can recover in a way that is fair and just.   Thus, the  Israeli regime is able to, not just continue its policies of dispossessing Palestinians, but also  take measures  to prevent Palestinians from protecting themselves from Covid-19.

De facto annexation continues as the outside world takes no notice.

Yet shocking stories are documented.

For example, from the the Israeli human rights NGO, B’tselem (www.btselem.org) :

As the whole world battles an unprecedented and paralyzing healthcare crisis, Israel’s military is devoting time and resources to harassing the most vulnerable Palestinian communities in the West Bank, that Israel has attempted to drive out of the area for decades. Shutting down a first-aid community initiative during a health crisis is an especially cruel example of the regular abuse inflicted on these communities, and it goes against basic human and humanitarian principles during an emergency.

The spread of COVID-19 in the Gaza Strip will be a massive disaster, resulting entirely from the unique conditions created by more than a decade of Israeli blockade.

The world is grappling with an unprecedented heath crisis of as-yet unknown magnitude. Nevertheless, Israeli authorities continue to invest time and effort into abusing the most vulnerable Palestinian communities in the West Bank, as part of decades-long attempts to drive them out of the area, and to similarly mistreat Palestinians in East Jerusalem.

a)Israel’s Supreme Court: Palestinian Prisoners Have No Right to Social Distancing against COVID-19

This precedent-setting ruling endangers the lives and health of Palestinians held by Israel, and poses a threat to society as a whole. It flies in the face of health and human rights professionals around the world who have called for social distancing within prisons.

“Israeli soldiers destroyed a coronavirus testing booth set up by Palestinian security at the entrance to the northern West Bank city of Jenin in order to contain the spread of the disease, and injured a Palestinian man during clashes at the city’s refugee camp, according to the Palestinian news agency WAFA. “

“In March, the Geneva-based Euro-Med Monitor urged the international community to protect Palestinians and force Israeli soldiers to stop incursions of cities and towns that threaten preventive measures taken by the Palestinian Authority to control the outbreak of coronavirus. “

For example , from  electronicintifada.net :

Israel occupied East Jerusalem in 1967 and formally annexed it in 1980.

Israel has specific obligations under international law to guarantee health and other basic services to Palestinians living under its military rule.

Far from respecting its obligations, Israel’s systemic neglect and continuous violence in East Jerusalem became increasingly evident during the pandemic.

Israel took a business as usual approach when it came to oppressing Palestinians.

The Israeli authorities failed to set up COVID-19 testing facilities in a timely manner, failed to provide accurate and reliable data to track the spread of the virus, harassed and arrested Palestinian health activists, and hindered the procurement of essential equipment by hospitals.

By denying basic health care to Palestinians – and, worse, attacking their health care facilities – Israel has made it inevitable that the death toll will rise.

For example, from  mondoweiss.net:

“Hebron is in crisis right now, and this hospital would have really saved us,” Hebron’s mayor Tayseer Abu Sneineh tells Mondoweiss. “But the occupation doesn’t care.”

With every passing day, the situation in the Hebron district of the southern occupied West Bank continues to get worse.

The district, which is the largest in the West Bank, has become the epicenter of a second wave of the coronavirus outbreak, with more than 5,300 recorded cases, accounting for 62% of the total cases in Palestine.

The clinic was build on land owned by Palestinian Raed Maswadeh.

“My family donated our land, and put in hundreds of thousands of shekels of our own money to build this clinic,” Maswadeh said, adding that he was driven to start the project after his grandfather passed away due to COVID-19 complications.

“This was our way of honoring my grandfather’s memory and helping our community,” he said. “But Israel does not care about that, and they clearly don’t care about Palestinians dying because of the coronavirus.”

This last example, particularly interests Martin and me,  as we have been to Hebron several times , taking part in ICAHD (Israeli Committee Against House Demolition) tours. Hebron area settlers, religious extremists,  protected by Israeli soldiers,  are notorious for their violence against Palestinians.

It was after hearing talks by a Dunedin Quaker, the late Christina Gibb, about her experiences in Hebron as a Christian Peace Maker, that we felt we should visit that part of the world to learn more.

Perhaps, at least I hope, there is no other place on earth like Hebron.

Hebron is where , in February 1994, Brooklyn-born Israeli Baruch Goldstein, wearing his army uniform and carrying his army-issued assault rifle, entered the Ibrahimi Mosque and fired at Palestinians at prayer.   He killed 29, wounded some 150. After civil unrest, the Israeli regime forced the Mosque to be broken into two sections, Muslim and Jewish . Palestinian access to nearby streets was restricted.  Ever since, the settler numbers have  kept increasing, as has their open violence against Palestinians.

We are told stories about the suffering caused by the pandemic as well as  the fear that the pandemic may be spinning  out of control  in so many part of the world. Situations may be exacerbated by a shortage of medical supplies or  by a lack of leadership capable of rising to the situation.

BUT IS THERE ANY OTHER COUNTRY BESIDES ISRAEL WHERE  A PARTICULAR SECTOR IS DELIBERATELY BEING CONFRONTED  WHEN IT TRIES TO PROTECT ITSELF FROM THE PANDEMIC ?