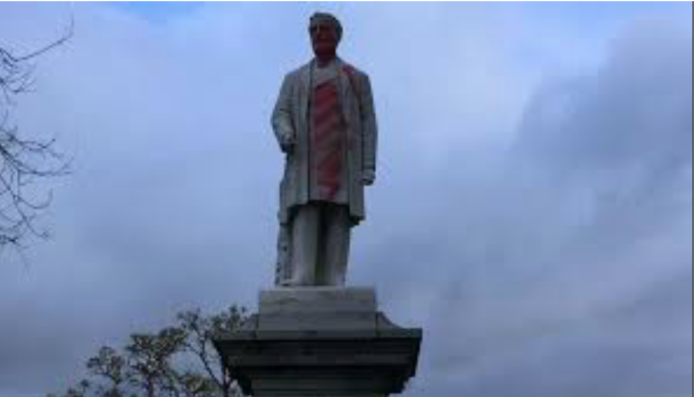 There are so many images that define the weirdness of our times. The ominous orange skies of Australia’s bushfires seem a more innocent age ago – when all we apparently had to worry about were climate change and species extinctions. Suddenly, subsequent images were of motorways empty and deserted of traffic -unheard of, shocking in what they revealed about the disruption of everyday life. Toilet paper rushes, queues of ‘socially distanced’ people outside supermarkets. Fork-lifts loading bodies into refrigerated trucks. Mass graves. A cop with his knee fatally pinned against a prone black man’s neck. Trump holding a bible. Looting of shops and an angry expose of an unequal American dream. Crowds of thousands, bowed on one knee to honour George Floyd and the victims of racist systems and racist acts everywhere.

Other images stick with me too – shed sized piles of dead pigs, collateral damage from the corporate food system that treats animals as commodities and waste – and, as victims of a disrupted supply chain, inconvenient lives to be disposed of, via ‘humane slaughter’, which was anything but – drowning them in firefighting foam or turning up the heat until they cooked to death – over hours. At home, the photos of stunned and despondent Sky City workers meeting their own fates as waves of ‘rightsizings’ and redundancies decimate their ranks.

These are the faces of capitalism. Casino capitalism treats the world’s fortunes like something to be gambled and hedged. Real casinos and the elite horse racing industry get concessions from governments to promote gambling, (and animal cruelty), but not for their workers. We import immigrant workers to do our precarious dirty work, hard labour, cleaning hotel toilets for leisurely tourists or picking fruit, jobs kiwi didn’t care for, until now. But the immigrant workers themselves are now dispensable, left to their own devices, from hero to zero in the blink of an eye, invisible and uncared for by state welfare services and even the ‘kindest’ of governments. ‘They’re ‘others’ -second class non-citizens, political footballs, as usual. Racism and expediency combined.

We’ve achieved a non-victory of sorts here in NZ though, as the new Police Commissioner Andrew Coster, admits the trialed Armed Response Team style of policing has no social licence. “It’s not the sort of policing New Zealanders find acceptable”. But it’s an argument that should never have been had. Ask Maori communities how they find policing – especially armed policing, (and JustSpeak did), and you’ll find they felt targeted, vulnerable, exposed, and at the mercy of an authority who was not their own. But as the death-by-cop killing of George Floyd found, cops don’t have to have guns to be brutal.

Those images of the American cops pushing the elderly protester were brutal enough. But to walk past him as he lay on the ground bleeding from the head showed the illegitimacy of brute force and violent state power. Apparently police aren’t trained to diffuse aggressive situations, or to deal even with elderly aggressive protagonists, other than through violence. As a JustSpeak poster here in New Zealand says “imagine if, instead of armed police, we had teams of mental health and de-escalation specialists ready to help, 24/7”. “Wouldn’t that be safer communities together”. Wouldn’t that be better policing, policing we all could trust? Where mental health problems had a mental health response.

How about policing that people of all colours could respect, a society that even poor brown people could have a stake in, be represented by, believe in perhaps? How about a police force that has mana to Māori? Not a (post) colonial militia continuing to express an oppressive, illegitimate rule of someone else’s law. That many first convictions for Māori men are in response to suspected cannabis possession, a victimless and socially unjustified ‘crime’ but which puts many onto a path of future ‘criminalisation’, makes police force even less legitimate.

Because in NZ, even before the Armed Response Team ‘initiative’, young Māori men were more likely to be suspected, stopped, apprehended, arrested, convicted and incarcated than their pakeha counterparts. Between 2009 and 2019 two-thirds of people shot by the police were either Māori or Pasifika. The Minister of Police, Stuart Nash, is just not credible when he says the New Zealand police force isn’t racist, though the Minister of Justice, Andrew Little, more compassionate and with a clearly broader understanding of the expression and effects of structural racism, says ‘everything has to change’.

It’s hard to see how that change might come when political economy itself, historically, and currently, shapes race -and class relations – themselves expressions of power. Māori are already more likely to be poor with poorer education and health status than white New Zealanders or white New Zealand immigrants. Māori are more likely to suffer in an economic downturn. Unemployed migrant workers are pawns in New Zealand First populist posturing. The shakedown from lockdown is more likely to benefit the already well-off, and bigger companies, than those already on the margins.

Black Lives Matter protests around the world are encouraging for their show of unity and solidarity. But protesters and protestations are still directed from the outside looking in. No legitimate representative democracy should really need reminding that its indigenous and other minorities matter. The revisionist desire to pull down statues of colonisers, oppressors and tyrants, is a rally against victors’ justice and victors’ versions of history. A history that is still racist in the making. A history that continues to reduce the life prospects for some groups more than others, based on ethnicity.

Bushfires and drought, workers treated like surplus stock, the COVID-19 pandemic, the treatment of animals in agriculture – and in the wild, the mistreatment of indigenous ecosystems and of indigenous people, all over the world. These are the manifestations of our economy. Profit is built on keeping costs low and extracting value at others’ expense. It’s an economy built on alienation and exploitation of nature and of all living things. It’s built on systematic brutality, slavery, indentured labour, wage oppression, and disregard for life. It’s based on the displacement of first peoples and their own political and economic systems, the commodification and use of their labour, the erosion of their traditional structures of law and lore.  Our quality of life and the private property system and political regime, the coffee and cocoa in our cups, the bananas on our plates – the meat and the fruit, the transportation networks, the oil in our cars and the palm oil in our food, are all the results of extraction, subjection and domination via systematic oppression of people and of places. It’s all political.

Despite the rush to return to the economy of pre-Covid-19, statues are not the only edifices we should seek to dismantle.