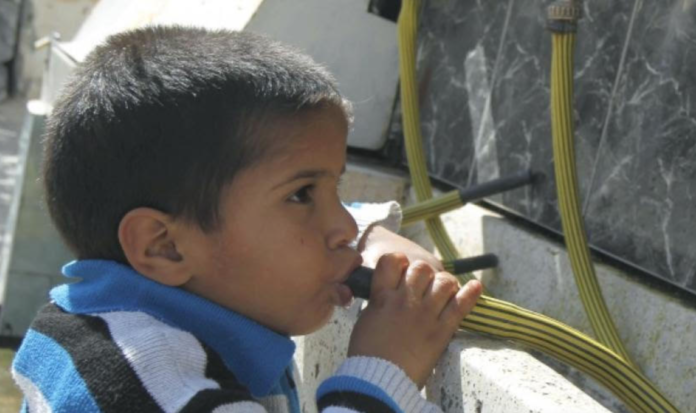 From 13-25 May (inclusive), there were 34 Israeli Gaza ceasefire violations, none of which provoked even a single Palestinian response. The Israeli Navy carried out 14 attacks on Palestinian fishing boats that included the wounding of one fisherman, as well as a hijacking and the taking of prisoners. Besides many attacks on local agriculture, the Israeli Army made three incursions into Gaza. Israel claims that its violence towards Gaza is in order to protect its borders – but it is the Zionist regime‘s forces that pass at will, in and out of Gaza, taking advantage of the people’s total lack of defence.

In the West Bank, there were 22 raids, with home invasions, on Palestinian villages and towns. On 13 May, Israeli forces, firing live ammunition, rubber-coated steel bullets, stun grenades and tear gas canisters, continued sporadic raiding (begun the day before, with the wounding of three people) in the village of Ya`bad. Houses were searched and yet another person, Mahdi Billal Hamarshat, was wounded. In the early morning, a mother, Nujoud Muhammad Salih Khamayseh, was admitted to hospital in Jenin after suffering a nervous breakdown, as a result of seeing Israeli soldiers severely beating and hospitalising her 13-year-old son, Mu’tasim Ribhi Muhammad Abu Bakr.

On 17 May, an Israeli Occupation settler, in the Old City of Jerusalem, knifed and hospitalised a 17-year-old Palestinian youth, Mohammad Al-Natsh. On 18 May, armed Israeli soldiers robbed Majdi Hashim Mohammed Hamad of his bulldozer as he worked his land in the village of Immatin, and seized a wooden hut from a Beit Einoun villager, Hisham Eida. On 19 May, for the second day in a row, Occupation forces bulldozed Palestinian farmland, in order to make way for a seven-kilometre settler-only road. Israelis from the Rahalim Occupation settlement made their presence felt by setting fire to crops and olive trees on al-Sawiya village farmland. Other settlers raided agricultural land in Ras Al-Deir Ariya, Yitma, and severed the branches from approximately 40 olive trees. Over the period, there were many more acts of Israeli Occupation violence and population control, including the seizure of water pipelines in the al-Buqa’a area of the Jordan Valley.

On 20 May, one person was wounded as Israeli troops, firing live ammunition, raided Tubas. At 2am, Israelis from the Rahalim Occupation settlement, stoned the home of Mohammad Jasser Snoubar in Yitma village, attacking the family and severely injuring two people. On 21 May, stone-throwing settlers injured four more people and other Israelis set fire to Palestinian olive and almond trees. On 22 May, Israeli settlers beat up and hospitalised two farm workers, others set fire to Palestinian crops, and the Israeli Army set fire to approximately 120 more Palestinian olive trees. On 23 May, Israelis, armed with metal bars, beat and hospitalised two villagers. The next day saw more beatings and agricultural sabotage (including arson) by Israel settlers. On 24 May, Israeli forces raided Za’tara village, just before 2am, and destroyed a tent dwelling, the home of a villager, Hazem Hashem Abu Mohammad. They also destroyed a livestock shelter. Israeli settlers in Jerusalem beat up and hospitalised two residents, Ashraf Al-Shweiki and Dalia Al-Nimri, while in Shuafat village, settler militants assaulted several farmers and severed the limbs off several olive trees. In the evening, a gang, from the Havat Ma’on Israeli Occupation settlement, set fire to wheat and barley crops on land between the villages of Tuba and al-Tuwani. On 25 May, there were two Israeli Gaza ceasefire violations, Israeli settlers uprooted 200 Palestinian olive trees and drove a vehicle into a herd of goats. Since 13 May, Israeli troops have abducted 14 Palestinian minors, the youngest aged 14.

A multinational professional service firm, the TMF Group, tells us that New Zealand is the easiest country in the world in which to start a new business. The World Bank’s 2016 Doing Business report found that starting a new business here involves one procedure and takes half a day. TMF assures us that businesses are attracted to New Zealand in part because there is “no payroll tax, no social security tax (voluntary KiwiSaver was introduced in 2007) and no capital gains tax. A wide range of free trade agreements and pro-competitive regulation make New Zealand an ideal base for expansion in the Asia Pacific region, with free trade agreements (FTAs) in place in many of the major economies.” Unsurprisingly, TMF Management and Accounting Services (Israel) Ltd have offices in Tel Aviv.

Israel’s Occupation exploitation of Palestinian water resources is a war crime that also has a relevance closer to home. On 21 May, The Palestine Solidarity Network Aotearoa (PSNA) posted an article on The Daily Blog revealing that New Zealand had quietly signed a Technical, Innovation, Research and Development Agreement with Israel, without publicising it. PSNA’s National Chair, John Minto, noted the fact that, “Normally a major bilateral deal would involve photo opportunities at Parliament and press releases.  On this occasion, with the Israelis, nothing.” While MFAT and the mainstream news media remained quiet, the Ministry of Business Innovation and Employment did publish a notice about it on 5 March.

The main publicity, however, came from the One Community | Web Portal for the NZ Jewish Community and the Israeli Embassy. The Israeli Embassy celebrated the signing, noting that Dr Gerberg had told the Australia Israel Review: “the relationship [with New Zealand] is good but there’s room for improvement”. He also said: “Most people understand that Israel is in a very problematic area and that when dealing with Israel it’s important to understand that context. People also realise that Israel is a sophisticated and advanced country, and there tends to be great admiration for Israel’s military and technical achievements.”

One Community also published an account of the signing by NZ Minister, Megan Woods, reporting The New Zealand Ministry of Business, Innovation & Employment (MBIE) international science partnerships manager, Simon Rae, as saying Israel has key capabilities in agritech, water management and other areas of interest to New Zealand, adding that a closer partnership with Israel will provide real opportunities for New Zealand firms. That closer partnership has already benefitted the Israeli company Netafim which is closely aligned with the Zionist enterprise.

Beware the company we keep

According to the Israeli Institute of New Zealand, the Netafim company is the largest supplier of irrigation equipment in New Zealand. It was founded with the financial backing of the Jewish National Fund (JNF) and the Settlement Division of the Jewish Agency, as well as the Israeli Ministry of Agriculture. An independent research centre, Who Profits from the Occupation, is dedicated to exposing the commercial involvement of world-wide corporations in the Israeli military occupation of Palestinian and Syrian land. Who Profits (an offshoot of the Coalition of Women for Peace) informs us that, heavily subsidised by the Israeli Government, Netafim’s products and know-how have been used to boost the profitability of Israeli agricultural settlements in the West Bank and the Syrian Golan Heights.

While Israel’s severe restrictions on the free movement of people and goods prevents Palestinians from cultivating their land, which is a major source of their income, many have been forced to offer their skills for employment and exploitation in Israeli Occupation settlement. Israel confines the Syrian population in the Occupied Golan Heights to 5% of the land and a disproportionate allocation of water resources for agricultural production force farmers to pay up to four times more for water than their Israeli counterparts.

Netafim profits further from the commercialisation of military knowledge, derived from the experience gained in the fusion of military and civil enterprises. The company’s command and control software, developed specifically for the Israeli Iron Dome air defence system exemplifies the profit potential of making available to the agritech market technology developed, as in this case, for the blockade of Gaza. Netafim’s complicity in the Israeli settlement enterprise and Occupation economy means it is party to a wantonly-induced scarcity of water and land for Palestinian agriculture. The Israeli military ensures virtually limitless access to water for settlement agriculture and domestic use and, while Netafim provides Israeli farmers with smart irrigation systems, nearby Palestinian communities, prevented from developing their own water resources and infrastructure, are forced to purchase water from the Israeli state-owned Mekorot – at rates determined by the Israeli Occupation.

IrrigationNZ, Netafim and the National Party

IrrigationNZ is a group of corporate entities that describes itself thus: “INZ is a national membership organisation that looks after the interests of irrigating farmers, growers and the industry professionals that service them.” Netafim is a member of INZ. In a Press Release on 25 May, INZ congratulated National MP, David Bennett, for being handed the agricultural portfolio from the previous holder and new National Party leader, Todd Muller. Elizabeth Soal, IrrigationNZ’s Chief Executive, commented, “We have worked closely with Todd since he took over the agricultural portfolio, and we congratulate him on his new role as leader of the National Party, alongside his deputy Nikki Kaye.”

The Israeli Ambassador’s presumption of “great admiration for Israel’s military and technical achievements” reflects something deeply-seated in Zionist thinking. For Israel, the combination of technology and militarism afford superiority and the opportunity for material gain over others. Yet still, both within and outside New Zealand Government circles, those who would tie our country closer to Israel would do so quietly and with circumspection. In the spirit of UN Security Council Resolution 2334, they must be challenged and called to account.