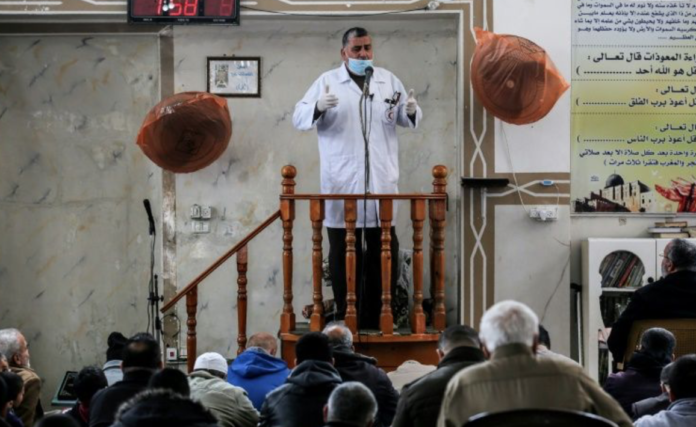 With the illegal, Israeli blockade of Gaza and brutal military occupation of the West Bank the results will be catastrophic but we can do something to help NOW.

Several organisations have got together to write to the Prime Minister urging action. You can add your voice here www.psna.nz/petition

Netanyahu and the Israeli establishment will be unmoved to see devastation to Palestinian families and communities living in overcrowded refugee camps and under a brutal military occupation and blockade.

Here is the letter you can sign at www.psna.nz/petition

The more than two million people living in the blockaded Gaza strip in Palestine are being left to face the Coronavirus with hopelessly inadequate medical facilities and extreme overcrowding – conditions in which the virus will spread rapidly and devastatingly unless action is taken now.

The usual medical and public policy advice to Palestinians cannot hope to deal with this terrifying scenario. Health officials warn that if the virus enters Gaza, containment and treatment under the Israeli blockade will be nearly impossible.

In similar vein the Israeli human rights organisation B’Tselem has reported that, even before coronavirus, Gaza’s barely functioning hospitals are dealing with the fallout from thousands of injuries which have resulted from murderous Israeli sniper fire on demonstrators in the ”Great March of Return” protests on the Gaza side of the security fence.

97% of all Gaza’s water is not fit to drink and Gazan hospitals don’t have enough clean water even for medical staff to wash safely. Simply calling on people to wash their hands regularly and keep social distances is a recipe for an unmitigated human catastrophe.

The situation is little better in the occupied Palestinian territories of the West Bank where, as a result of Israeli’s brutal military occupation, medical facilities are also inadequate with serious shortages of basic medical equipment, trained personnel and essential medical supplies.

The looming human catastrophe is clear. When medically well supplied countries like Italy and South Korea have struggled to contain the virus there is no way the hospitals in Gaza or the occupied Palestinian territories will be able to cope.

Each year New Zealand votes at the United Nations for the end of Israel’s military occupation of the West Bank and blockade of Gaza.

It’s now critical for the government to back up those votes with effective political action. We urge you to put the welfare of Palestinians alongside concern for New Zealanders and speak out calling for Israel to end its blockade of Gaza and military occupation of the Palestinian territories and allow Palestinians to access the medical supplies and equipment they need to deal with this crisis.

Bishop, Diocese of Waikato and Taranaki

Maori Vice-President of the Council of Trade Unions

Authors of “In Occupied Palestine”