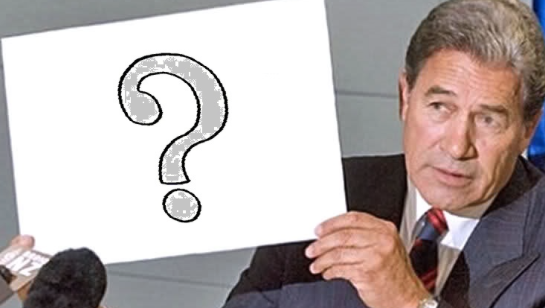 It’s a sad irony that the wizened politician Winston Peters is the one who allowed Jacinda Ardern the current opportunity to form a Government coalition while also limiting her ability to oversee a properly transformational government.

The most recent instances of questionable behaviour by New Zealand First highlight the party’s predeliction for playing loose, and there’s been a pattern of behaviour that’s been tolerated throughout this electoral term. There’s an argument that with the most recent revelations of hidden electoral donations, due process should allow the Serious Fraud Office to complete its investigation before judgments are made – on the other hand, there’s a smoking gun – Winston was involved in the establishment of the New Zealand First Foundation, which secretly channeled donated funds to the party, packaged into small amounts so they were under the statutory threshold but which cumulatively should have been declared. Media outlets have been careful to say that the donors didn’t break any laws, though in similar dodgy donation deals from the National Party, where the judicial process is further developed, both the facilitators of the undeclared donations and the donors, have been charged. So even while there’s still due process to run its course in the donations scandal, there are risks for Jacinda Ardern in being perceived as weak against Winston and New Zealand First, because the failure of Jacinda to stand up to Winston over the dodgy donations sits in a broader distasteful context.

Shane Jones practicing target shooting with automatic weapons of murder. Shane Jones and other New Zealand First contacts lobbying for forestry contracts while presiding as Minister of Forestry. These are some of the unethical and corrupt (?) practices we’ve become aware of. NZ First MP’s behaviour is often boorish, rude and offensive, bizarre, unhinged and/or unfathomable (Shane’s bursting into song at the Fifty Shades of Green rally, Winston playing Radio Gaga instead of answering media questions). While high profile politicians elsewhere around the world, such as Boris Johnson and Donald Trump display equally bizarre behaviour, the New Zealand First power to veto progressive policies from the Labour and Green parties, while banking policy gains to further their own political prospects means the regressive, retrograde and conservative policies of NZF dominate -overpower- the potential for public good, forward looking, structural reform for New Zealand more widely.

In the post-election Coalition negotiation arm wrestle/lolly scramble, New Zealand First secured their own policy gains such as the Provincial Growth Fund so they could play pork barrel politics up and down the country. But at the same time, they preserved the power to veto more progressive initiatives from Labour and the Greens. So who has the power? Winston Peters has the power – the country is being held to ransom by his conservative coalition minority party. New Zealand First is the tail wagging the dog and biting the dog, and everyone else too.

Because both National and NZ First are embroiled in election donation scandals, there’s some argument for reform of electoral funding. The crony capitalism that New Zealand First practices so well, with its electoral donations from sectoral interests and revolving door of MPs, lobbyists and advisors leading to policy vetoes and bias, should be reformed through full tax-payer funding of party political campaigns at election time, say some. Without full state funding, parties are dependent on donors – who will want favourable policies in return. Parties can’t be trusted to declare donations and will try to hide in whose interests they are voting. The solution, the argument goes, is to remove dependence on private sector funders and fund election campaigns with taxes. That might avoid the impression of vested interests buying votes, but it won’t stop politicians supporting policies where their own commercial, social, political or personal interests coincide with policy beneficiaries, against wider public and environmental good.

In the case of a New Zealand First veto of fisheries regulations to protect endangered species for example, even if they’re not receiving electoral donations from Talley’s (which Shane Jones has), his past, present or future interests in the fishing industry mean he’s likely to oppose necessary restrictions or controls. Similarly with forestry, and other sectors. I haven’t seen any evidence that NZF was receiving donations from forestry companies, but their own attempts to secure contracts for planting trees as part of the NZF initiated “Billion Trees” programme show what happens when self-interest coincides with potential commercial gain. Election donations to NZF from the horse racing industry or property developers, leading to tens of millions of dollars of subsidies, tax breaks, investments, and favourable policies, might be saved with full tax-payer funded election campaigns, but that doesn’t guarantee that personal rewards discontinue, or that the MPs suddenly become impartial, benevolent or public interested. An MP or party, by nature occupies a place on the political-economic spectrum and will continue to represent the interests therein, whether they receive direct, declarable donations or not. What we need is a higher calibre of politician, not just more robust funding mechanisms. Even with tax-payer funded elections, catering to special interest pleading and favours can be motivated by MP’s self-interest, future-oriented incentives, networks and other connections, and shared world view.

They say failure is an orphan, but success has many fathers. The political game NZ First plays shows they claim credit for policies successfully secured but they also master the self-promoting gloating social media meme every time they subvert a Labour or Green policy promise. This week the memes are about their veto of the proposed Green Party Electric Vehicle subsidy. Previously they proudly claimed credit for preventing the implementation of Capital Gains Tax (though Jacinda’s pledge to never support the tax in her time as leader was inexplicable). They’ve held up fisheries reform, conservation promises, welfare reform. NZ First claims credit for every policy they secure and every Coalition or support party policy they prevent.

As we get nearer to the election, the stakes get higher. NZ First are already quick to make policy promises, to court conservative policy audiences (for example agriculture), to distinguish their policy agenda from Labour or the Greens. The gloves are off. In this trienium, NZ First have been both the giver of supreme power to Jacinda Ardern and the Labour Party, but also the brake on that power. Gains have been secured for NZ First donors, and Labour/Green aspirations have been humiliated and thwarted.

According to current polling, NZ First may not secure enough votes to return to power. NZ First aren’t to be trusted. We can’t afford to have power in New Zealand First’s hands (or National’s either). A Labour/Green Government willing to go further, faster with reform without the constraints of NZ First are essential if we are to address the problems of the modern age. We’d be so much better off without their crony capitalism, though dealing with the greed of capitalists would still be a challenge to face if we really want transformation toward greater equality that citizens deserve.