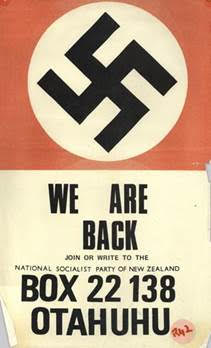 ONE OF THE MOST puzzling features of contemporary New Zealand fascism is its self-imposed failure. When fascist groups are discussed, the image conjured-up in the minds of most New Zealanders is one of pathetic misfits. This negative impression is reinforced by the latter’s idiotic embrace of the swastika. Even in the second decade of the twenty-first century, the baleful legacy of Adolf Hitler and the Third Reich is more than powerful enough to consign those who embrace its iconography to the category of crank and/or criminal. When combined with the contemporary Kiwi fascists’ shaven heads and multiple tattoos, these wilful references to the defeated fascists of the past fundamentally compromise their entire political project.

Such self-destructive behaviour suggests that New Zealand fascists simply do not understand the nature of the ideology to which they have attached themselves. Above all else, fascists validate the national community. In the local context, this means embracing all the myths and symbols of the New Zealand nation state. No genuine New Zealand fascist would consider for a single moment marching down the street beneath the flag of their country’s World War II enemy!

Genuine fascists present themselves to their fellow citizens not as outsiders, but as the ultimate insiders: the ones whose attachment to the core values of the nation is stronger than any of their political rivals.

That Hitler’s stormtroopers wore uniforms did not strike the Germans of the 1920s as either odd or sinister. (As the wearing of uniforms outside the armed forces and the police most certainly strikes today’s New Zealanders as both odd and sinister.) Many groups in pre-World War I German society wore uniforms – student societies in particular. In most Germans’ eyes they simply betokened unity and collective purpose: positives – not negatives. The swastika, similarly, when adopted as the symbol of the Nazi Party, struck most Germans as intriguing rather than threatening. When it was explained to them that it was an ancient symbol, representing the power and purity of their “Aryan” origins, they were impressed – not repelled.

The equivalent in contemporary New Zealand society would be an ancient Maori symbol. A Kiwi fascist would present this as proof of his movement’s mystical connection with land and people.

The misfits who call themselves fascists, while carrying around the swastika flag, understand nothing about the political iconography of radical nationalist movements. Indeed, it is hard to imagine anything more calculated to make the rest of the country regard them as an outside force that must be destroyed – rather than as a deeply patriotic group with privileged access to the inner wellsprings of their nation’s identity.

Perhaps the best way to illustrate what a New Zealand fascist movement might look like is to describe the rise and fall of the New Zealand Legion – the closest this country has ever come to a mass fascist organisation.

In essence, the Legion represented the outrage and distress of upper- and middle-class New Zealanders at the seemingly intractable problems thrown up by the Great Depression. While the incumbent United-Reform coalition government seemed incapable of effective action, the Labour Opposition struck members of the business and professional classes as a clear and present threat to their wealth and status.

Shaken by the riots of the unemployed in 1932, a group of “patriotic” businessmen, professionals, sheep-farmers, teachers and journalists came together, in February 1933, with the purpose of galvanising the respectable classes into action. Within a few months 20,000 people (mostly males over 40 who had served as officers in the First World War) had joined the NZ Legion – numbers rivalled only by the mass membership of the 1930s Labour Party.

On the card they were required to sign, intending members read:

“[R]ealising the present serious National emergency, and the necessity for all good citizens to subordinate private and political interests and to make any necessary personal sacrifice for the sake of the country, [I] agree to become a member of the New Zealand Legion and to further loyally, by every means in my power, by vote, example and personal influence, the objects of the Legion.

They further pledged to be “loyal to his majesty the King, the British Empire, and the New Zealand Constitution.”

In essence, the Legion sought to take politics out of politics by outlawing political parties. (Which was just a typically pusillanimous middle-class way of calling for the outlawing of the Labour Party!)

Politics, however, was what ultimately killed the Legion. Its leaders and members simply couldn’t agree on what it was, exactly, that patriotic New Zealanders needed to do. Unlike a genuine fascist movement, it lacked a charismatic leader capable of preventing such crippling internal debates by reserving all policy-making powers to himself.

By 1934, the legion was on the wane. A year later, the Labour Party, whose 50,000 members had some very clear ideas about what needed to be done, was elected to govern the country. The Legion was over.

According to the historians at the Ministry of Heritage and Culture:

“With the conservative parties being well and truly trounced by Labour at the 1935 election, the Legion was soon forgotten. Some of its members, though, became active in the new National Party formed in 1936. Eight former Legionnaires were selected as National candidates in the 1938 election, and the movement’s greatest success story, Sid Holland, went on to serve as National Prime Minister from 1949 to 1957.”

Contemporary Kiwi fascists would be wise to take heed of the lesson provided by Sid Holland and his fellow Legionnaires. The cause of radical nationalism is best served by aligning oneself and one’s followers with those individuals and groups possessing the power and resources necessary to advance it.

From the very beginning, Hitler’s Nazi Party (like Mussolini’s fascists) was able to call upon the resources of extremely wealthy and well-connected supporters. And you may be sure that when he called upon these supporters for financial and political assistance, Hitler arrived wearing a well-tailored suit and a silk tie – not a brown shirt. He certainly didn’t arrive carrying the Tricolour or wearing the steel helmet of a French infantryman!

Indeed, when he ran for the German presidency in 1932, Hitler presented himself as a decorated war hero who did not drink or smoke and who followed a strict vegetarian diet. Those newspapers sympathetic to his party’s cause told their readers that this former artist and front-line soldier, who had been awarded the Iron Cross (First Class) for his bravery under fire, loved cakes, dogs, children – and, above all else in the world, Germany.

All of these details were correct.

Of course, if the 37 percent of Germans who voted for Hitler in 1932 had known what he would do to their country, and the world, between 1933 and 1945, it is unlikely that quite so many of them would have given him their support!

But, that’s the terrifying thing about real fascists, they don’t come wearing warning signs, and they aren’t obliged to present us with x-rays of their souls.

That New Zealand’s tiny collection of self-proclaimed fascists choose to come before us bearing both of these identifying items, tells us two very important things. 1) They’re not really fascists. 2) If we want to identify those radical nationalists who are truly dangerous, then we need to look elsewhere than pathetic collections of wannabe führers.