It is very strange that we are getting drip fed some important changes to NZ Super with little fanfare or discussion.  Even stranger, given this is the year that the Retirement Commissioner has a statutory duty to review all retirement incomes policy.

The MSD kept very quiet about the abolition of the spousal deduction, yet it will go ahead next April 2020. The fight for this has gone on for over a decade including a hearing in the HRRT 18 months ago for which there has been no decision yet. Weirdly, no one from Labour or NZ first has fronted this momentous decision.

Alongside this policy, the government will abolish the non-qualified partner pension.  Maybe they are keeping this one quiet because it will be contentious and possibly hurt couples in the future where the younger under pension age spouse, usually female is his caregiver?  Removal also saves quite a bit of money. Packaging it with the spousal deduction removal helps disguise the cost of the latter which is miniscule, and that the delay in abolition of such an unjust policy has been a disgrace.

The seven background papers for these two changes to NZ Super policies have  just been released on MSD’s website . They make interesting reading. Clearly, there is more than just the abolition of the spousal deduction and the non-qualifying partner pension at stake.  Details of most of these other policy proposals are redacted so the new ideas are not being disclosed. 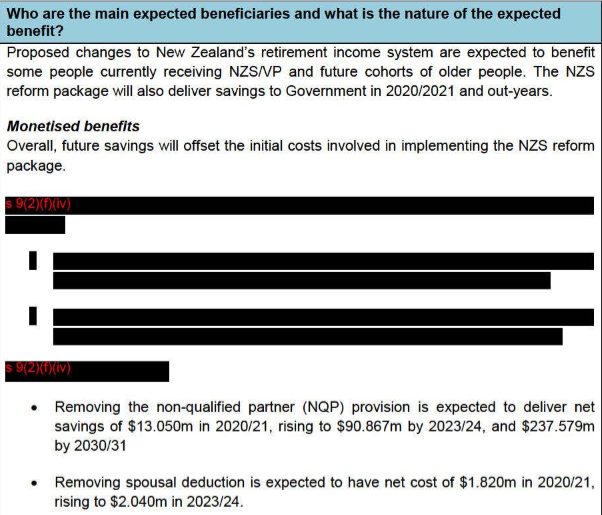 There is one that escaped the black pen and raises alarm bells. The government is proposing an opt out regime for NZ Super. It is very hard to understand why, without any discussion, the government is contemplating this.

Currently there is no concern about people missing out on NZ Super as coverage is pretty close to complete for those who qualify.  So the additional people who will automatically get super under an opt-out policy are only those who are wealthy enough not to need it and wouldn’t have applied for it on principle.  Granted there doesn’t seem to be many of these, but why discourage them from saving the state money? Opting out is hard work.

One of the worst ways to make policy is to pull it out of the hat and implement it without proper public scrutiny and wide debate. There are too many recent examples of this.

The Winter Energy Payment is a case in point.  It goes automatically to all of the 750,000 superannuitants who get NZ Super on the expectation that if they don’t need it, they will opt out. Of those who get it and don’t need it the MSD has said only a tiny number, around 2000, opted out last year.  At the very outside, probably only 100,000 actually need it so about $300m is sprayed about unnecessarily.

It has other design flaws such as paying significantly more to two single people sharing accommodation ($900) than to two people that the MSD deem to be in a relationship ($750).   The implicit, quaintly old-fashioned assumption seems to be that married and de facto couples would never have separate bedrooms.

Consultation on all policy decisions on NZ Super must be open and transparent.   If we must have universal payments like NZ Super and the Winter Energy Payment, then opt in policies are much more cost effective than opt out. But is opt out a fait accompli? What else is the government contemplating under its black marker pen?