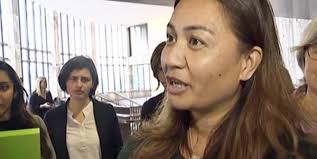 That face you pull when you suddenly realise Julie Anne Genter was a way better choice as leader.

Green co-leader Marama Davidson has called on the “bros” to “delete” themselves in a Twitter rant criticising the treatment of ethnic communities in New Zealand.

In her tweets, Ms Davidson said “white immigrants” had never been “slayed” by the same derogatory or dehumanising abuse as Asian citizens or people of colour.

“Under this long-standing false narrative, struggling and marginalised communities have been pit against each other,” Ms Davidson wrote, saying people shouldn’t be surprised by the revelations coming out of the National Party.

Admitting she was “p*ssed”, Ms Davidson kept her most brutal comments for the political analysts she labelled as the “bros” that “cover up power abusers”.

“Get out. Delete yourselves,” she said.

…fresh from reclaiming the word ‘Cunt’, Marama has decided to go on a barely comprehensible twitter blizzard against white bros for patriarchy and interpersonal heteronormative power imbalances, or something.

If only Marama could put as much effort in remembering the costs of her policy announcements as she does sticking it to the white bros.

The Greens seem to think that lots of retweets and likes by the woke twitter echo chamber amounts to wide spread electoral support, unfortunately we’ve learned the reverse is true, anything the woke love is generally detested by the mainstream with as much intensity as your average feminism student towards Donald Trump.

The problem with alienating woke identity politics is that when you are barely staying above the 5% threshold, I’m not sure that’s the smartest tactic, but then again when it comes to strategy, the Greens have all the vision of a blind Cyclops.

They have gone backwards with a smaller and smaller vote every election over the last 9 years, and they still point blank refuse to take any responsibility for that.

I think a resurgent TOP, while not being able to cross the 5% threshold themselves, will cannibalise the non radical faction of the Greens and lead them to fall under 5% in the 2020 election.

While the climate burns, the Greens read a poem to their vegan electric bicycle and will predictably blame everyone else when that self mutilates them at the ballot box.

UPDATE: For suggesting that this kind of woke micro-aggression policing is probably a counter-productive message for a Party barely keeping over the 5% threshold, Marama Davidson has decided I too am a bro who also needs to delete my twitter account… 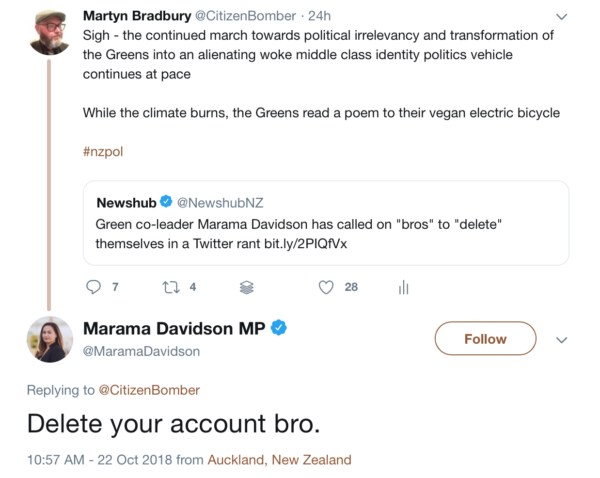 If the Green leadership honestly think this is what gets them re-elected in 2020 good luck to them.

UPDATE OF UPDATE: One day Marama is calling for white bros to delete themselves, then she is crying for engagement…

…flakiness is not a great political value.