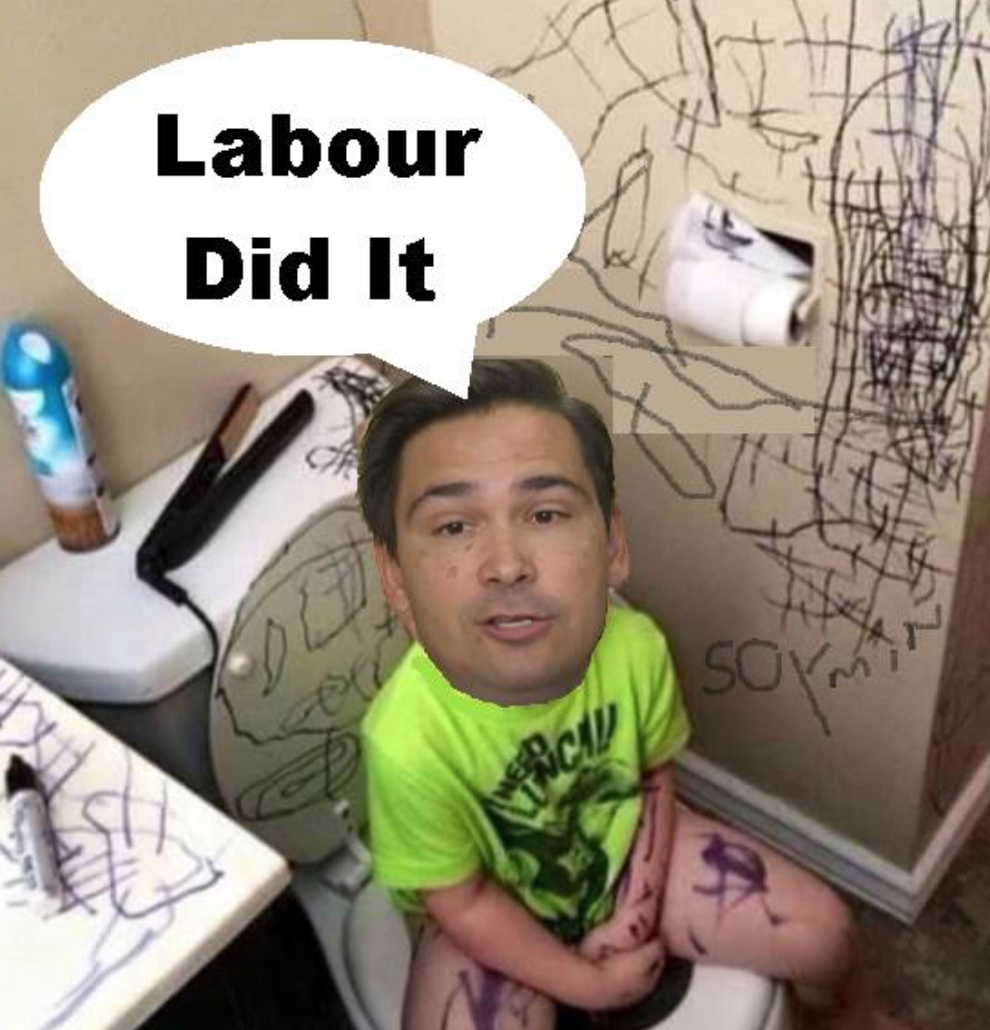 While the Left has been fiddling about with much gnashing of teeth and tears of concern over the right of two Canadian neo-fascists to speak at an Auckland City council venue – National’s focus has been laser-like at regaining power in 2020.

Like rust, the Right doesn’t sleep. Their failure to install a fourth-term National government came about only because of a fatal mis-step by (most likely) someone in the National Party/Government in a clumsy, ham-fisted ploy to undermine Winston Peters and cripple NZ First in last year’s general election.

Whoever released Peters’ superannuation over-payments to the media did so with political malice-aforethought. It was an agenda to neuter Peters and his party, and it was executed with callous precision.

It failed  because Peters was canny enough to counter with a parry that revealed the ploy for the ruthless strategy that it was.

The black-ops plan succeeded in only alienating Peters and reminding him that National was not to be trusted. With thirtythree years political experience, Peters had no intention to be anyone’s “useful idiot”.

With no potential coalition partner on the horizon (unless one is manufactured by a National MP splintering from his party), National’s only remaining options are;

For most middle and upper-middle class voters Charter Schools are a non-issue. Their children either attend State schools, Integrated Schools, or Private Schools. The common thread between all three is that they are established; staffed with qualified professionals; and the curriculum is bog-standard (with minor variations-on-a-theme.)

National’s hard-line stance to increase Charter School numbers should it be re-elected to power is curious because it would not appear to be much of a drawcard  for propertied middleclass voters who tend to vote along self-interest lines.

Which indicates that the policy has other intentions; a toxic “witches’ brew” of  ideological (further) commercialisation of education and a subtle, well-camouflaged attack on teacher’s unions.

So: not specifically designed to be a vote-winning policy. More of an  weaponised attack-policy on State education and unions.

Perhaps the most eyebrow-raising policy to be released was classroom size reduction. Made by current National Party leader, Simon Bridges on the day of the Conference opening on 29 July, he committed National to this radical (for Tories) social policy in clear english;

“All our kids should get the individual attention they deserve. That’s why I want more teachers in our primary schools, to ensure smaller class sizes for our children.

Schools currently get one teacher for every 29 nine and ten year olds. It’s lower than that for younger children.

Those ratios should be reduced.”

Mr Bridges’ newfound concern for classroom sizes harks back to several speeches made by former PM, John Key, in 2007 and 2008, where he lamented growing social problems in New Zealand.

“As New Zealanders, we have grown up to believe in and cherish an egalitarian society. We like to think that our children’s futures will be determined by their abilities, their motivation and their hard work. They will not be dictated by the size of their parent’s bank balance or the suburb they were born in.”

“During his State of the Nation speech on Tuesday, Mr Key indicated National would seek to introduce a food in schools programme at our poorest schools in partnership with the business community.

“I approached Wesley Primary School yesterday, a decile 1 school near McGehan Close, a street that has had more than its fair share of problems in recent times. I am told Wesley Primary, like so many schools in New Zealand, has too many kids turning up hungry.

“We all instinctively know that hungry kids aren’t happy and healthy kids.”

Once elected into power, National quiety dropped it’s concern for social problems. Social Development Minister, Paula Bennett, did not even want to countenance measuring growing child poverty in this country. It suddenly became the fault of the poor.

Ironically, in tapping into parental fears of over-burdened schools and their children suffering because of over-worked teachers, Mr Bridges’ policy commitment stands diametrically opposed to National’s doomed policy announced on 16 May 2012 to increase classroom sizes;

The policy was announced by gaff-prone former education minister, Hekia Parata, who  clumsily (if honestly) admitted that the move was purely for fiscal reasons;

”The reality is that we are in a tight economic environment. In order to make new investment in quality teaching and leading, we have to make some trade-offs… ”

Teachers – and more importantly, voting middle-class parents were having none of it. National’s cost-cutting of welfare, health, and state housing was one thing. But interfering with their Little Johnny and Janey’s education? Like hell.

Especially when it was revealed that then-Prime Minister, John Key’s own children attended private schools with… smaller class sizes!

The over-powering stench of hypocrisy further infuriated the voting public. The policy lasted twentyone days before it was hastily dumped;

Simon Bridges was unequivocal:  a National government would spend more on education;

“National will invest more to make sure our kids get the best quality start to their education, but we will also demand nothing but the highest standards.”

However, National has not explained how they will pay for the cost of additional teachers. Especially as National continues to  advocate for a billion dollar mega-prison to be built;  promised to dump the Coalition’s fuel taxes, and has not ruled out offering election tax-cut bribes.

As National has been fond of demanding: where will the money come from for extra teachers? Is this National’s own multi-billion dollar fiscal hole?

It was left to Labour’s own education minister, Chris Hipkins to point out;

“It’s very expensive to make even a modest change to class sizes and I think that’s something we want to talk to the teaching profession about.”

However, barely a day after his Conference speech, Mr Bridges was already backtracking;

Simon Bridges admits his promise of smaller class sizes may not mean fewer students per classroom.

The National leader announced a new policy to reduce the teacher-student ratio, as a centrepiece of his conference address over the weekend.

However, many primary schools run “modern learning environments” with several classes in the same room.

” So in those modern learning environments, that may mean more teachers, but that doesn’t necessarily mean smaller classrooms.”

The Coalition should be making mincemeat out of Mr Bridges’ policy u-turn.

An oldie, but a goodie.  Tories understand how to tug the fear-strings of a sizeable chunk of the voting middle-class. National and other conservative parties around the world are (in)famous for manipulating middle-class fears on crime for electoral purposes.

One of their 2011 election hoardings explicitly exploited those fears;

A recent video campaign on National’s Facebook platform has gone a step further into whipping up fear and paranoia;

This is a shameful, naked ploy to play on peoples’ fears.

It was backed up by former mercenary, and current National Party “Justice” Spokesperson, Mark Mitchell, who tried to offer “alternative facts” relating to crime figures;

The Government needs to stop looking for excuses to go soft on crime and come up with a plan to reduce crime, National’s Justice Spokesperson Mark Mitchell says.

“No doubt the report today from the Prime Minister’s Chief Science Advisor saying that being tough on crime is to blame for rising prison costs and inmate numbers is music to Andrew Little and Grant Robertson’s ears.

“They’ve been looking for excuses to loosen up bail and sentencing laws so that the Government doesn’t have to go ahead with building the new Waikeria prison and can boast about reducing prison numbers.

“But the cost of prisons cannot be an excuse not to put people in prison, if that’s where they need to be. The priority must be to ensure that victims are kept safe from violent criminals.

“We know that the overall crime rate has been decreasing, but a lot of that is due to a reduction in lower-level offending.

Which is confusing as not too long ago, National was trumpeting several propaganda infographics on their Twitter account;

Mr Mitchell is at pains to point out that  “we know that the overall crime rate has been decreasing, but a lot of that is due to a reduction in lower-level offending” – yet the infographics above make no such distinction. On the contrary, the second “broken bottles” infographic makes clear the figures relate to “Total Recorded Crimes”.

Perhaps they should get their propaganda straight.

In a startling admission, Mr Mitchell confirmed that ““violent crime has actually gone up four per cent since 2011″. It appears that the “Three Strikes Law” – enacted the previous year in 2010 – has failed to reduce criminal offending.

The questions that  Coalition government ministers should be putting to their National Party colleagues are;

National has made clear that it intends to play the “tough-on-crime” card at the next election. The propaganda campaign has already begun.

The Coalition Parties need to formulate a clear strategy to combat fear-mongering by a National party desperate to regain power.

The question that should be put to National is; where will the billions of dollars for new prisons come from?

The prison population has all but doubled in eighteen years, and tripled since 1987, as successive governments have ramped up “tough on crime” rhetoric and pandered to fearful low-information voters;

Tough-on-crime may be National’s default strategy. If addressed correctly, it can also be their weakness.

The Daily Blog: Real reason why National are considering cutting ACT off

NZ Herald: John Key’s ‘A fair go for all’ speech

Radio NZ: No promises from Hipkins on reducing class sizes

Fairfax media: Does the Government have any money for this Budget? Yes

Twitter: National Party – The crime rate is falling under National.

The Daily Blog: What everyone seemed to miss in their criticism of the National Party Conference

The Daily Blog: What the 2018 National Party Conference tells us