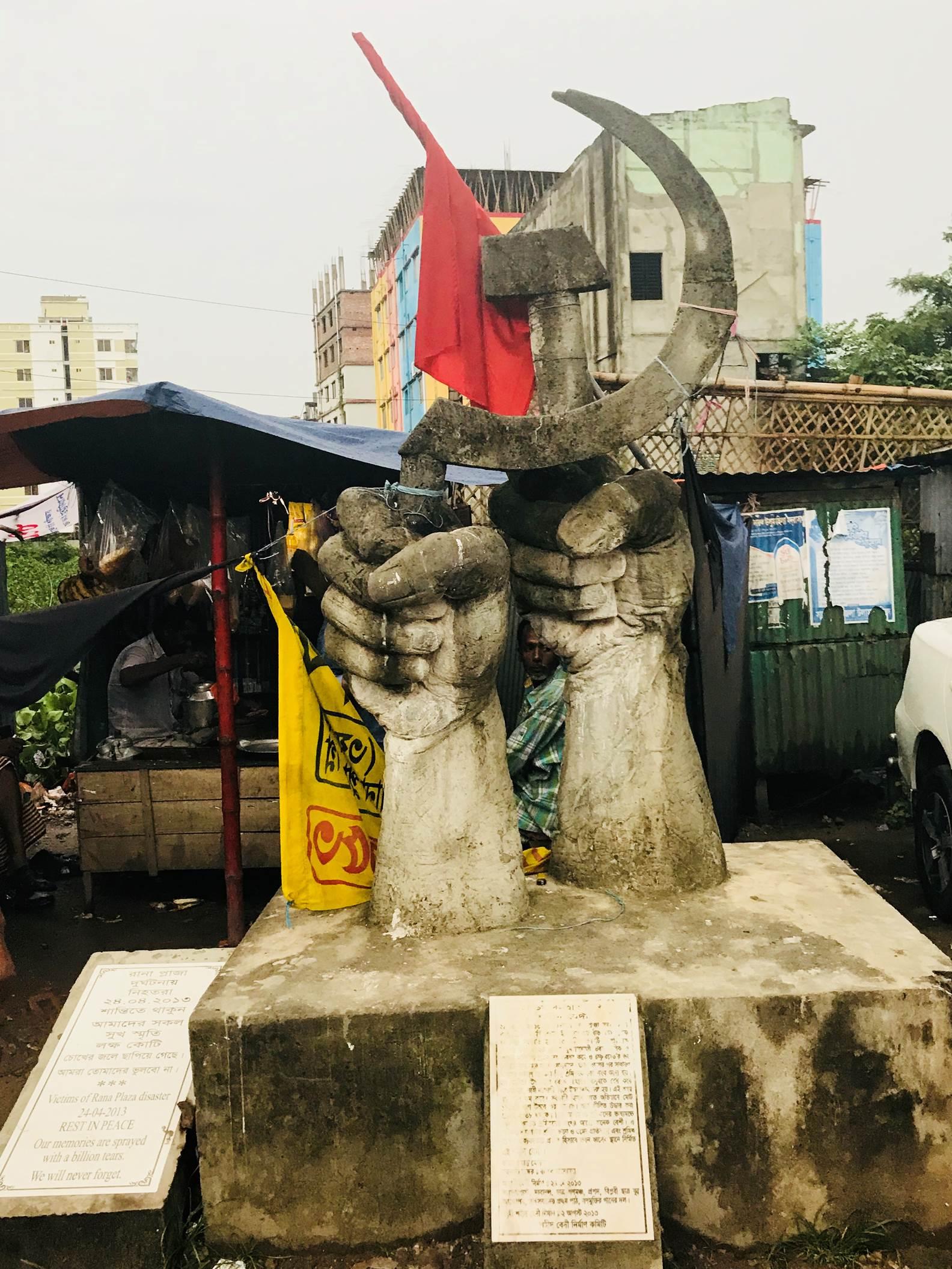 The sky was losing light as we finally approached the memorial for the victims killed in the Rana Plaza collapse. As I tried to frame a shot without slipping in the mud that surrounds the monument  I thought it was fitting that we should be remembering them as the sun dipped down behind the row of sheds and shacks that block the view of the empty field where the Rana Plaza used to stand. 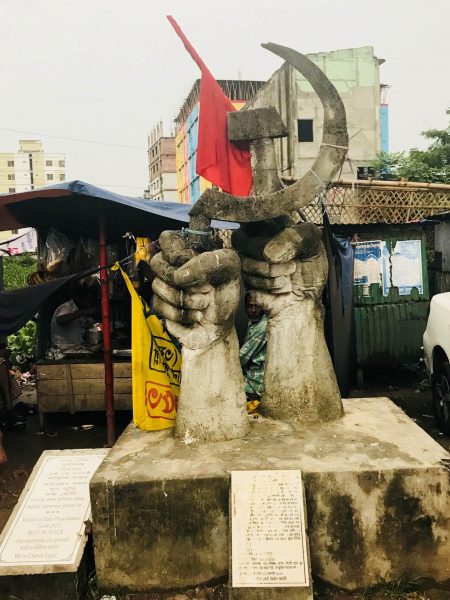 The memorial is concrete. It is rudimentary, yet powerful. It is not in the empty field where five years ago the five floors crushed down upon all within. It is not an official monument. It is a protest as much as a memorial and it is testament to the resilience of workers over the greed and sheer negligence that resulted in the collapse of the Rana Plaza in 2013, killing 1,134 workers and injuring a further 2,500. It depicts two hands clasped, holding a hammer and sickle. When the sun rises I am to meet with some of the survivors and some of the victims. 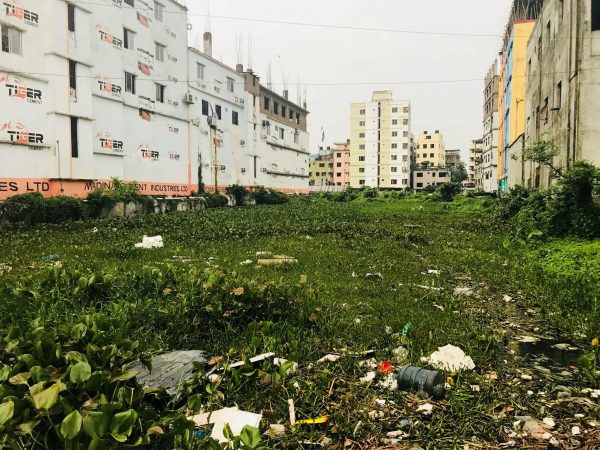 My first conversations were with two women called Shila, who shared not only a name but a life altering catastrophe. They had worked at the same garment factory in the building and even sat quite close to each other. They were both crushed as the building came down on top of them. 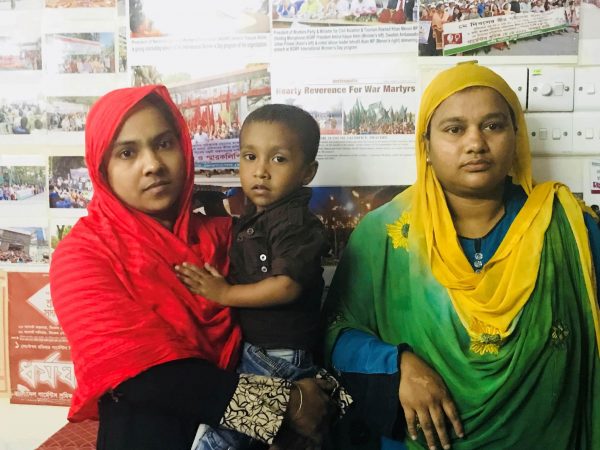 Shila was trapped under her sewing machine when the building crumbled. She was trapped for five hours. She has damage to her arm and her back. She can’t sit or stand for long periods. Initially she thought that was the extent of her injuries. It took a while for her to realise that she had problems with her head. It took over a year to diagnose that she had suffered a brain injury. More than a year after the injury she received TK 200,000 (NZ $3,400). Most of it was spent on medical care, the CAT scan and diagnosis. She can no longer work. She has a baby now.

Shila Begum was trapped in the building for fifteen hours. She spent fifteen hours trying to hold her uterus in with her hands. She has a spinal injury. She can no longer use her right arm properly. She cannot lift things. She damaged a kidney. She no longer has a uterus. She also received TK 200,000 a year after the event. She can no longer work. She has a daughter who is now 15 and she has brought her daughter’s school report to show me because she is proud of her remarkable grades. She cannot afford to keep her remarkable daughter in school. 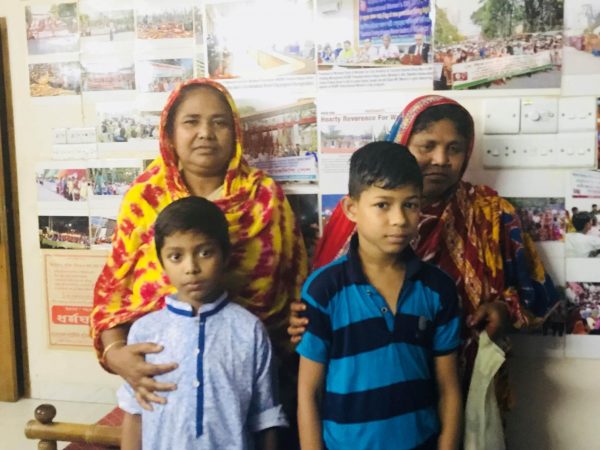 Then I met Bizoy who is now 13 but looks much younger. Both of his parents were killed in the collapse. He is being raised by his grandmother, Razia, who lost her daughter and son in law. Selina Actah and Sahadat Hossain. She made me write their names and she checked the spelling. I sincerely hope I have got them right. Selina and Sahadat had only been working at the factory for six months. Razia received TK 600,000 ($10,200 NZ) Their bodies were retrieved four days after the collapse.

Parvez is now 8. He is being raised by his grandmother Suphia. His mother was Parven Aktor. Suphia had a bad feeling on the morning of the disaster. She tried to convince Parven to stay home, but the factory manager had threatened the workers with repercussions if they didn’t show, even though there were visible cracks on the building that had been reported by local media on April 23rd. He had said they must come to work or they would be fired. Suphia lived nearby and at around 8.30am heard a loud crack. She found her daughter’s body lying in a field of bodies 15 days after the collapse. In the year following the accident they had no money and couldn’t pay rent.

The next of kin and the survivors all had to wait a year after the event for any compensation. When they received it, it was apparent that it was nowhere near enough. They struggle. The worry is clearly etched on their faces and permeates their stoicism. The compensation came from the companies that were getting product made in the factories housed in Rana Plaza. Those companies are still sourcing their products in Bangladesh.

The four women I spoke to had all received support (both financial and emotional) from the National Garment Workers Federation ( NGWF). They helped them during the year they fought for compensation.  The NGWF is still fighting to try and get them access to ongoing financial support but the lobbying falls on deaf ears. The issue is dead and buried.

In the last five years the building safety regulations have been tightened, largely due to those companies that supported the Bangladesh Accord on Fire and Building Safety. It has just been ratified again. IKEA pulled out. I ask the women if they think things have improved since the day their lives disintegrated with a poorly constructed building. They agreed things were better in the factories – but that didn’t help them. After the lump sum there was nothing more. Shila Begum  looks at me and says ‘The dead are the lucky ones. They are no longer suffering’.

While building safety may have been improved in the last 5 years the work conditions have stayed the same. The pay is not enough to live on, the hours are ridiculous, the breaks are inadequate. It was Ramadan when I visited. Some of the factories reduced the break time the rationale being that if  people are fasting they need less break time.

I asked if the owner of the Rana Plaza, Shiel Rana, who is currently in jail, ever visited them  or apologised. The women speak at once, the looks of disgust clear on their faces. Nothing. He was arrested when he was caught trying to leave the country.

The morning of this meeting I had been nervous about talking to these women – I had dressed in the cheap clothes I had bought specifically for this trip. They were unflattering and ill fitting, inadequate for the task. Several times as the women spoke I felt myself choking with emotion and struggling to hold myself together. I managed by reminding myself that they had no need for my white tears and sympathy. White tears and hand wringing  had done little for them up to now.

We take some photos and I try to think of what I can say to close. I thank them for their time and for sharing their stories. I say that I will return to New Zealand and tell people what I have learned. I will try and help. Shila Begum  smiles at me bitterly. She says she has told her story before and it is true she has travelled to 4 counties and given interviews to many before me. She no more believed my words when I said them than I did. They are platitudes. What happened at Rana Plaza has been erased by a fund and a plethora of consultancies charging companies for safety accreditation. The money they pay would go a long way toward schooling Shila Begum;s daughter.

The world has forgotten the survivors and the victims. The children being raised without parents have receded in our collective consciousness in the stampede  to get to the next shop sale or mega mall opening.