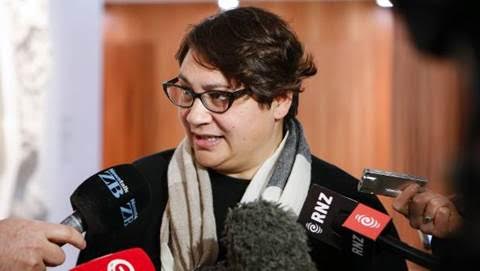 CRUEL NECESSITY drove Metiria Turei’s decision to rule herself out of any ministerial role in a Jacinda Ardern-led government. Dramatic changes in the Left’s fortunes, initiated by Andrew Little’s resignation on Tuesday morning, presented the Greens female co-leader with very few realistic alternatives. For those shocked and angered by this stunning reversal of Metiria’s fortunes, a brief examination of those limited political options, may make her self-sacrifice slightly easier to accept.

The most tempting option must surely have been to double-down on her radicalism by throwing the condemnation of her quarter-of-a-century-old transgressions against WINZ and the Electoral Act straight back in her critics faces. Metiria could have challenged the politicians and journalists clamouring for her resignation to acknowledge the clear implications of their denunciations. To accept that if they are prepared to allow relatively minor legal infringements, committed many years in the past, to debar a politician from wielding executive power 25 years later, then what they are really saying is that no radical activist can be a Cabinet Minister.

Responding to Kelvin Davis’s less-than-friendly comments on the AM Show this morning (4/8/17) she could have pointed out that the first Labour Cabinet contained a whole swag of radical activists whose youthful union activities in the Red Feds regularly involved breaches of the law. She could have pointed out that Labour’s second prime minister, Peter Fraser, had been jailed for sedition during the First World War. Would Kelvin Davis have told Peter Fraser (or Paddy Webb, or John A Lee) that they had made their own beds and now they would have to lie in them?

The problem with this argument is that the transgressions of Fraser, Webb and Lee were committed in full public view and, like all acts of civil disobedience, undertaken in the certain knowledge that they would be met with an equally public official response. John A Lee, similarly, had made an open book of his juvenile delinquency by penning the largely autobiographical novel “Children of the Poor”. Had Metiria done something similar, her list of options would now be longer.

Upping the radical ante would, almost certainly, be a counter-productive response for another reason. With Labour in what looked like terminal decline, it made perfect sense for the Greens to stake their claim to its apparently moribund relationship with the poor and marginalised. If nothing else, it would at least ensure that one political party remained to defend these New Zealanders’ interests. Sure, it meant taking votes off Labour, but with the erstwhile socialist standard-bearer in the grip of what appeared to be a suicidal lethargy, wasn’t that a good thing?

With Labour led by Andrew Little? – Maybe. Under Jacinda? – Not so much. Formerly despairing left-wing voters, inspired by Labour’s new leader, have been swarming back to her party in droves. Moreover, with the heady scent of victory in their nostrils, they have – virtually overnight – become highly sensitive to anything and everything which might impede the progress of Jacindamania. Rightly or wrongly, Metiria’s youthful indiscretions have come to be regarded as an impediment to Labour’s expected electoral recovery.

Ignoring the rising clamour against Metiria’s indiscretions, or, doubling-down on them, is no longer the way to pump-up the Green vote. On the contrary, either course of action will now be interpreted as evidence that the Greens are deliberately hindering Labour’s chances. Were that perception to become entrenched, then the most likely consequence would be a decline in Green Party support. The in-your-face radicalism that drove the Greens’ numbers up, would end up dragging them down.

Not for nothing did the British Labour Prime Minister, Harold Wilson, observe: “A week is a long time in politics.”

The over-riding imperative for Metiria has been to keep alive the long-deferred but much-needed conversation about the material circumstances of New Zealand’s beneficiaries, and their appalling treatment at the hands of this country’s social welfare bureaucracy.

That is what she has done – and who on the Left would dare not applaud her for it?