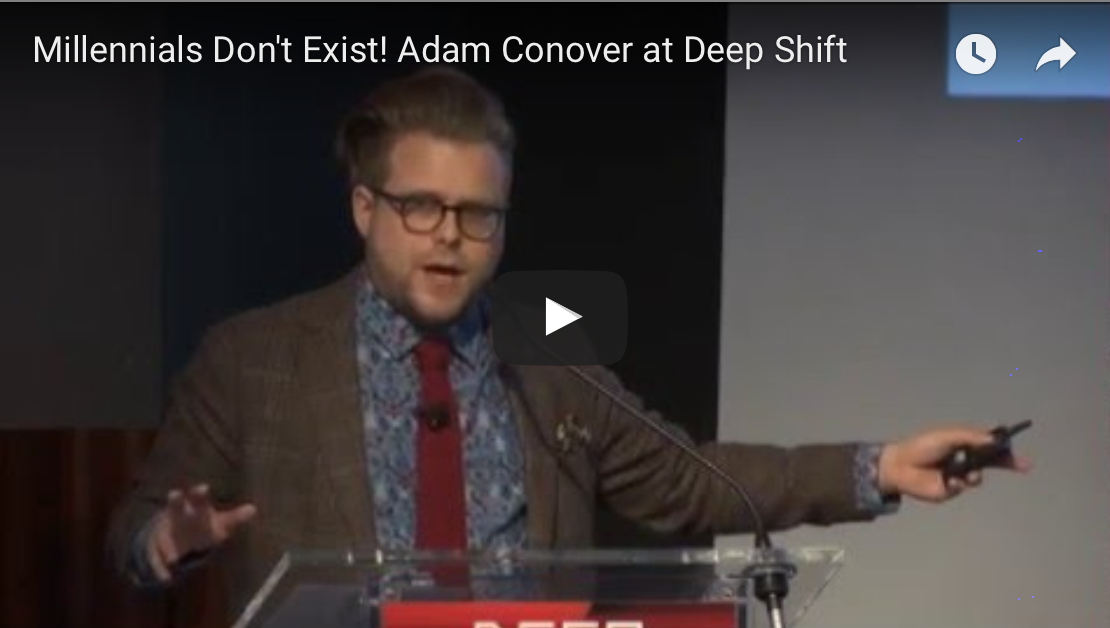 Geoff Simmons of TOP (the Opportunities Party) recently wrote a guest blog for TDB, in response to some rather harsh criticisms of TOP and its millionaire founder Gareth Morgan by regular TDB writer Chris Trotter.

I agree with Simmons about Trotter’s mostly ad hominem vent against Morgan and TOP, and the fiscally conservative (one might even say “neo-liberal” *gasp*) Clarkite policy positions he puts forward, while in the same breath accusing TOP of being “neo-liberal”. But Simmons loses me when he drifts off into a similarly weird rant claiming that the important political divide in 2017 Aotearoa is between “Boomers” and “Millenials” (where do ‘still renting in our fourties’ Gen Xers fit in). As Adam Conover explained to a bemused marketing conference, “generations don’t exist, we made them up”, which is good news for the millenials subject to constant accusations of being a narcissistic “selfie generation”.

It’s also important to understand, because when taken beyond dinner party polemic, the “generation war” narrative leads to some dangerously naive political positions, based on attacking anything that National and its spindoctors can manage to blame on “boomers” rather than neo-liberal policy. A good example is when Simmons attacks…

“Auckland Council’s Mike Lee who opposed the Unitary Plan to chase the votes of the NIMBY baby boomers.”

This is an incredibly short-sighted view, which fits nicely with National’s narrative that the housing availability shortage and the housing affordability crisis are all one problem, caused by lack of supply. Increase the supply, and the price goes down, right? Works for bread and pencils, why not houses?

There are a number of economic reasons why not, but the most obvious one is that supply can’t be increased as rapidly in the housing market as it can in the bread or pencils market. The availability shortage has been created by a number of things, and only one of them is a series of governments that haven’t done anything to ensure that new, quality housing is built at a rate at least as high as net immigration. Others include:

* government policies like the Clark Labour government’s “Jobs Jolt“, combined with increasing corporate buy-up and mechanization of farms, which have gutted rural communities, sending economic refugees into the cities in search of jobs. It’s sadly ironic that this is almost exactly how too many urban Māori ended up stranded in jobless city lives, after being forced off their land, or priced off with rates and other cash costs.

* rules allowing non-residents to own land and houses here, which almost no other country allows. The country is peppered with massive “summer homes” owned by the global 1%, which they might only stay in a few days a year. Although, if we just give away citizenship to the global rich (eg Peter Thiel), limiting property sales to residents won’t help much.

* rules that allow untenanted, empty properties to be written off as a tax loss, so there’s no incentive to make sure every property not being used by its owner is rented out.

* public housing stock being sold off rather than the supply being increased with new buils, in line with population growth.

As well as not addressing the other causes, the problem with increasing supply as a policy solution to the affordability crisis is that there’s a hard limit to the amount of housing that can be sensibly built on a pair of small, earthquake-prone, volcanic islands. Plus, the more houses you build, you more space you need for all the other land uses the people in all those houses want land for. Replace every public park with houses, every piece of arable land with houses, every flat bit of national park with houses, and every road and car park with houses, and you would solve the housing availability shortage for generations to come, right? Would Simmons say call people who opposed that solution “NIMBY”? Would he claim that those who cited environmental concerns were really just concerned about the value of their property investments?

Of course not, because anyone thinking about the long term can see that this solution would cause more problems than it solves. It’s especially important to consider the long game at a time when we’re going into energy descent, and we need to increase our resilience by growing more of our food closer to where we want to eat it. We need policies to re-establish flourishing economies in the regions, so people can build secure lives there, not pack people together like battery hens in the cities, with in-fill housing built on every place that used to have a vege garden and fruit trees. The relaxing of rules to allow more intensive housing is a policy intended to benefit the corporate developers who can raise the capital to build intensive housing, and the landlords who will rent it out at the same price they currently charge for a house with a section.

Even if we could cover every square metre of Aotearoa in high-rise apartments, there’s no guarantee that would solve the housing affordability crisis. While supply is obviously one influence on prices, and the real availability shortages have contributed to the perception that property is a good investment for speculators and professional rent-seekers, the affordability problem too has a range of causes, some of them going back at least to the 1980s. These causes include:

* the abolition of low-interest, government-issued mortgages for first-home buyers, one of the first economic actions of the Rogernomics Labour government

* the transition to a casualized, low-wage economy, which began under National in the 1990s with the Employment Contracts Act, and the beginning of dismantling the social welfare system

* the massive increase in the prices of pretty much everything, despite the promises of the neo-liberals that competition would make everything cheaper

* public housing stock being sold off rather than increased in line with population growth, building quality replacements for any units where tenants are allowed to rent-to-buy. Adequate public housing reduces the demand for private rentals, and the rent control (“income-related rents”) that the Clark government restored for public housing tenants acts as a moral anchor on rents charged to tenants in private rentals, as well as a benchmark for the minimum quality of rental housing.

But as I think TOP are aware, one of the main drivers up until recently was not having any kind of Capital Gains Tax (CGT), which is also something almost no other country does. Those with sufficient bank credit could rake in fortunes in untaxed income by constantly “flipping” properties, something people who have to sell their labour for income generally can’t do. This massive transfer of wealth from labour to capital is illustrated by figures given by John Minto in a another recent piece on TDB:

National’s CGT on ‘sales less than 2 years after purchase’ is actually a simpler system to administrate than Labour’s proposed ‘exception for the family home’, while achieving the same thing. But I would extend it to 5 or 10 years. Who buys a house to live in and absolutely *has* to sell it in less than 5 or 10 years?

All of these things makes it much harder to afford rent and save for a deposit, harder to get a mortgage, and harder to pay it off in a reasonable timeframe, no matter how frugal you are. Over a couple of generations, this structurally confers massive advantage on the children of home-owners, especially those from small families, and massive disadvantage of the children of rents, and/or those from large families. As Thomas Picketty showed in ‘Capital in the 21st Century’, this is one of the drivers of increasing inequality from generation to generation. But it’s a line that divides property-owning families like mine from tenant families. This is not what generational inequality looks like, it’s what feudalism looks like.

Besides, as the authors of ‘The Spirit Level’ point out, nobody wins a race to the bottom. Those with more security and financial wealth end up paying anyway, one way or another, even if only in the the form of living in an immiserated society, or in the case of the “Boomers”, being expected to pay for their children’s eduation, keep them living at home into their twenties, and underwrite their first home purchase.

Like all good disinformation, the “generation war” narrative contains a grain of truth; namely that kiwis who were educated or got into the job market before the introduction of student loans, employment contracts, or exploitative private mortgages (see below), are not as badly screwed over as those of us who weren’t. But it loses that grain in a field of strawmen arguments, mostly based on implying that “Boomers” and their parents, as a *generation*, were the architects of this neo-liberal blitzkreig. Certainly the politicians who passed neo-liberal policy into law were older than Gen Xers, but just because all trout are fish, that doesn’t mean that all fish are trout.

Most kiwis, working class and middle class, “Boomers” and older, fought the impostition of neo-liberal “reforms” tooth and nail, shoulder-to-shoulder with younger “Gen X” activists. Together, we won many small victories that kept hospitals and schools open, prevented the privatization of roads and water supplies, and brought in proportional representation in general elections and many local body elections. All this despite being consistently betrayed by political parties who railed against neo-liberalism in opposition, and slavishly administrated it while in government.

This sad history of flip-flopping serves as a warning to those who naively think that everything can be fixed overnight by voting for a Labour/ Greens/ NZ First goverment, or for giving the balance of power to a smaller party like Māori/ Mana, TOP, or even the Cannabis Party for that matter. It also demonstrates that the essential political divisions at work here are not those between generations, but the gulf between the 1% and their neo-liberals lackeys, and the rest of us.

I think Victor Macgill put it best in his response to Simmons in the comment thread: