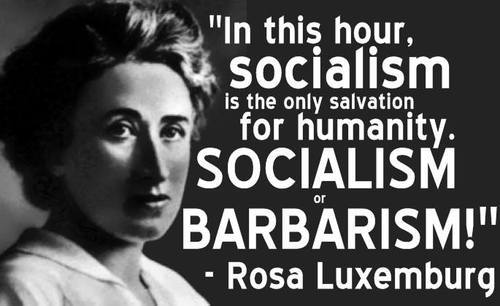 As Aleppo enters its third week of siege we have to ask what are its prospects for survival. Rosa Luxemburg famously said that capitalism gave us a choice – socialism or barbarism. For her, socialism had a name and it was communism – not the pathetic bureaucratic parliamentary socialism. Barbarism also had a name and it was fascism – based on the reactionary scum of society who were used to physically smash the communists who threatened to overthrow capitalism. As a communist Rosa lost her life to that capitalist barbarism. But while those who smashed in her head and threw her (and Liebknecht) into a canal were fascist thugs, it was the social democratic government in power that betrayed her to the fascists.

This is the moral tale about the history of the revolutionary left that refuses to go all out for socialism in the hope of negotiating with barbarism. History has proven time and time again that “socialists” who stop half way to revolution are defeated. Not only the communists but the masses they seek to lead to socialism.

This is the fate of all national revolutions that fail to become international proletarian revolutions. The Syrian Revolution fits that category. It arose as part of the revived Arab national revolution in the “Arab Spring” of 2011. The revolutions that remained ‘national’ uprisings (e.g. limited by a perspective of realising national independence) were frozen at various stages of gestation by the failure to turn these national uprisings into a wider Arab socialist revolution. Even where they were armed and overthrew national dictators as in Libya, they were halted by a failure to put a workers government in power.

Syria, is the sole example of an ongoing armed national revolution in MENA whose outcome is yet to be determined. The revolution armed only because Assad fascist regime repressed it brutally.The legacy of the “national socialism” of Stalinism when met with resistance becomes fascism. The spontaneous opposition armed and fought Assad for five years keeping alive the prospect that its victory would destabilise the whole MENA.

The fear of a successful national democratic victory emerging out of the revived Arab revolution in 2011 was enough to bring the US and Russian imperialist powers with a major stake in the region to an agreement to smash the revolution under the pretext of an alliance against “Islamic terrorism”. In the last year the intensification of US and Russian blocs military intervention in Syria has tipped the balance against the revolution. That revolution will fail unless it makes a qualitative shift to break out of its nationalist straitjacket.

All of these regional, national and local ‘nationalisms’ are objectively reactionary cutting across and dividing the historic anti-imperialist interests of Arabs, but more important the class interests of the multi-million Muslim masses spread from Morocco to Indonesia.It is these multiplying divisions signifying the degeneration of imperialism retreating back to pre-capitalist barbarism that is reproduced in the divisions among those fighting in Syria today. While the Syrian opposition has declared that “Freedom is our Sect” these divisions are expressed in multiple loyalties to this or that jumped up leader of this or that sect, ethnicity, etc.

Of course the barbarism of Islamic sectarian warfare is used by the Western social imperialist left to justify its view that the Arab revolution is not about bourgeois democracy but reactionary terrorism. Yet these barbaric divisions have been imposed on the Arab revolution by 100 years of Western imperialism, liberal democracy and the degeneration of the Soviet Union under Stalin. If we look at the spontaneous mass uprising in the Arab Spring, we find a universal adherence to values of bourgeois democracy – for the principles of liberty, equality and fraternity. What else does the slogan “Freedom is our Sect” mean?

We know that liberal democracy has always been limited to those with class interests in defending the “dictatorship of capital”. But it is the betrayals of the Second, Third and Fourth Workers’ Internationals that have made the counter-revolution possible. The betrayal of the German Social Democratic Party which led to the death of Luxemburg and the abortion of the German Revolution was that of ‘socialism’ coming to terms with imperialism – “social imperialism” socialism at home, imperialism abroad. The betrayal of the Syrian revolution today is that of ‘socialism’ in the name of “democracy” i.e. the dictatorship of capital. Assad’s regime is fascism in the name of “national socialism”. Social imperialism and national socialism are joined at the hip.

So what must be done in the West to overcome this legacy of historic betrayal of more than 100 years that can free the Syrian Revolution from the fate of barbarism? It is the recognition that the betrayals of “socialism” bought and paid for by the colonial tribute of imperialism pays for “democracy” and “socialism” to fool the masses at home and abroad to limit their independence struggle to the “national road to socialism” a la Stalin, Khaddafi and Assad which necessarily poses the familiar “socialism or barbarism”.

The military strategy is always to use the masses blood to advance the negotiating strength of this or that bourgeois faction to win the franchise to act as the gendarmes of imperialism. The blood of the Syrian people are bargaining chips for this or that client state. Israel has proven to be the most successful model arising out of Sykes/Picot to be emulated up to an including the ideal of the “sacred” state that serves imperialism.

When workers, poor farmers, youth and women etc unite to break from the degenerate patriarchal bourgeois factions, and strike out independently for the internationalist Arab Revolution, then one side of the reactionary nationalist trap is sprung. When workers, poor farmers, youth, women etc unite in the imperialist countries to fight against imperialist wars and military occupations then the other side of the nationalist trap is sprung. Arising out of the barbarism of degenerate capitalism imperialism will be the international socialist revolution and the federation of socialist republics of MENA!

Dave Brownz is TDB’s Marxist blogger because a progressive blog can’t be progressive without some Marx.