Home About Us About Gareth Hughes 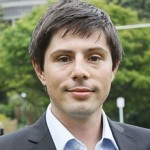 Gareth Hughes grew up in Gisborne before moving to Wellington to study Religious Studies, History and Politics. Garethlives in Wellington with his wife Meghan and their two young children, Arlo and Zoe.

He has previously worked for Greenpeace, sailing on the Rainbow Warrior and in 2009 he coordinated New Zealand’s largest ever climate campaign Sign On, which saw over 200,000 Kiwis demand greater Government action on climate change.

Gareth entered Parliament as the youngest MP in 2010, was named the New Zealand Herald Backbencher of the Year in 2011, and is now in his second term he is focused on campaigning for clean energy, healthy oceans and the Internet economy.

Gareth has worked extensively to oppose deep sea drilling in Aotearoa and to promote smart green alternatives like clean energy and the IT sectors. He is the Green Party Musterer (Whip).