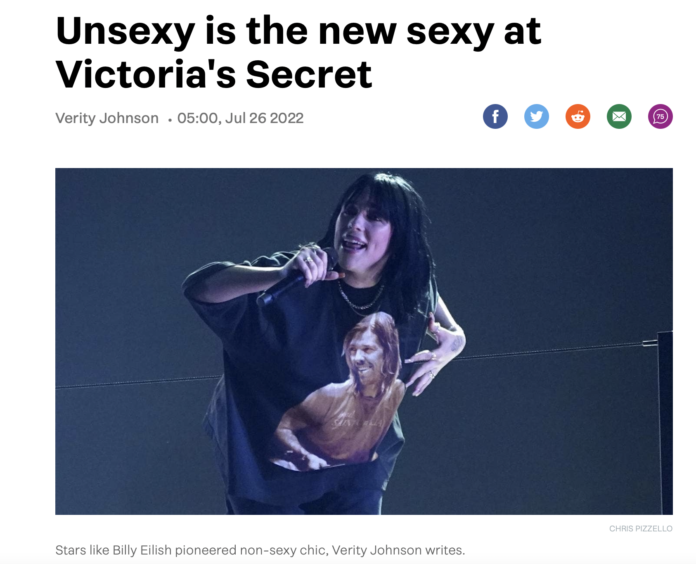 Unsexy is the new sexy at Victoria’s Secret

I’ve written before on how you can’t go into Bras N Things right now without getting a motivational podcast from a pair of hot pants. Sex toys are being rebranded as “self-love aids” by Cotton On. Fashion has rejected ass-hugging skinny jeans in favour of shapeless, sack-style Mom jeans. Sexy brands are frantically rebranding in a sexless way, for fear that wanting to be hot is now somehow passé.

They’re partly reacting to the chilly breeze of #sexnegativityblowing across the edges of popular culture; marked by the resurgence in popularity of extreme feminist authors like Andrea Dworkin, stars like Billie Eilish who pioneered non-sexy chic, and the fact that young people are having less sex than previous generations. Compare that to the Sex and the City era, and today feels surprisingly… regressive.

But while sex negativity may be dripping into the back of society’s mind, it’s not the whole picture. The backlash against sexy isn’t really coming from women’s desires; we aren’t suddenly waking up and thinking, I want to feel as glamorous as a tea bag that’s been left in the sink plughole overnight. (And interestingly, this is what an unimpressed Twitter user said when VS dropped its new look.)

The problem is that we still want to be sexy, but companies don’t want to sell sexy any more.

The new VS look is indicative of a post #metoo sector, and society, which is so scared of getting sensuality wrong that now it just won’t sell it. It’s the same fear bubbling up beneath this new, puritanical popular prudery.

God. That’s depressing. This wasn’t supposed to be the point of #metoo. It was supposed to be about stopping those in power from sexually harassing and abusing those who work for them.

…current woke dogma states anyone suggesting heteronormative sex might in any way shape or form be pleasurable is probably a sex offender.

I think culturally between men and women we are where we were in the 1980s with men and children.

Allegation after allegation of men molesting boys from the Church to the Scouts saw a cultural move in the 1980s which told men they shouldn’t be any where near children and if they were, they were automatically questionable.

Over this time you see vast numbers of men leave work where they interacted with children and men privately warned each other that they should never put themselves in any situation with children where an allegation could exist.

Even today you see the echos of that social change, and I think you have that between the sexes now.

Jimmy went out clubbing one night and was hanging out with a girl. They were both drunk and had taken drugs and ended up back at his flat. She got into his bed, took off all her clothes, fooled around for a bit and then decided she’d had enough (as is a woman’s prerogative) and left. Jimmy can’t remember exactly what happened. He blacked out.

The next thing he knew the girl’s male flatmate from upstairs was at the door of his room – and beat him up. The girl said he had assaulted her when she had said no. Jimmy can’t remember what happened. He feels terrible about all of it.

…together this makes for a toxic cocktail of anger, confusion, anger, hurt, anger and more anger.

If you talk to men privately about the post MeToo world there is a real fear of women now and the total removal of having any interaction at all from mentoring to socialising.

It’s considered safer to segregate on gender lines, which suggests the only winners as Verity is finding out in the gender wars is that no one wins.

The blistering distance between gatekeeper media and the overwhelming masses during the Johnny Depp and Amber Heard defamation case cemented into place a cultural backlash to MeToo that threatens to erase much of the progress we’ve achieved.

The overturn of Roe vs Wade reminds us what is at stake.