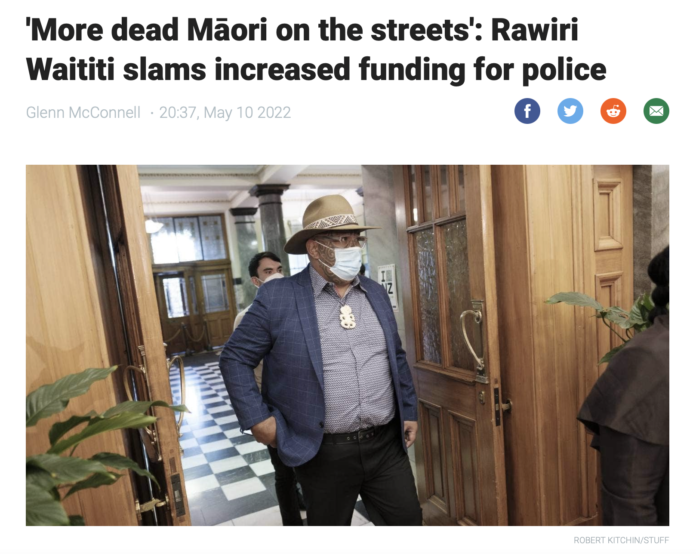 The Government announced more than half a billion dollars of new funding for the police over the next four years, in a pre-Budget announcement on Sunday. It included a promise to ensure there was one police officer for every 480 people, and $185 million to roll out the controversial “tactical response model” nationwide.

Waititi said this announcement would be devastating for Māori.

There is a real danger in NZ Politics that when you attack policy as racist to Māori we play the ‘is it racist’ game where everyone screams it is or isn’t, everyone goes back to their polarised corners, nothing progresses.

When we say people dying from Police shootings is ‘racist’ we totally allow the Police off the hook for advancing police policy this is killing people!

Armed NZ Police is a human rights issue, not a bloody race issue! By framing it as. trace issue, it allows Pakeha NZ to shrug and say ‘that’s their problem’, when the reality is Polic e shooting anyone is an us problem!

Any time the State’s actions lead to the death of a person, that action must be scrutinised and justified at the highest levels.

RNZ has done a withering expose on how trigger happy NZ Police are when it comes to shooting Kiwis. NZ Police are shooting NZers at 11 times the rates of Welsh or English Police.

One of the fundamental problems is that NZ Police are poorly trained when it comes to firearms and critics complain of a gung ho culture – why aren’t Police de-escalating events and preferring to open fire?

Almost 25% of those fatally shot had mental health issues, surely that alone demands some reflection from the Police?

10 out of of those 39 killed were shot in the back by Police, doesn’t that demand some reflection?

In 20% of cases investigated by the IPCA they found Police actions escalated events and put Officers into positions where shooting was the only option – surely a percentage as large as that – 20% demands a culture change within the Police?

I argued recently that one reason why the sudden jump in Police pepper spraying children is because the size requirements to be a Police Officer were relaxed to allow more minorities to becomes Police and the inadvertent conclusion of that decision was Police who were more reliant on weapons to assert dominance.

Combine this with lax firearm training and we have a Police force staffed by people who are too reliant on weapons to assert control.

It is not acceptable to have social policy as indifferent as this no matter who is dying.

Kaoss Price was a human being. Beyond the many reasons we may hold up to claim he deserves little sympathy, he was one of us and deserved a response to his actions that was proportionate to the threat he posed.

If we lose sight of that in the emotional backlash of him as a figure deserving of our sympathy, we have lost more than he has.

When human life is lost, social policy in a liberal progressive democracy that is ruled by law must ask why that is and how to avoid it in the future without putting other lives at risk.

It doesn’t;t matter what the skin colour is, this is a human rights issue that impacts all of us.

More physically small and ill trained, under resourced cops with more guns is a problem for everyone of us, not just Māori and we can’t allow a narrative that it is all about Māori eclipse it from our attention. 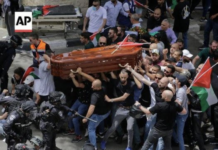 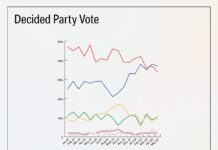