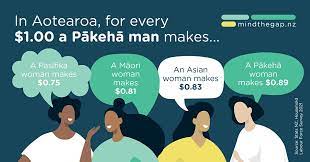 The need to close pay gaps for gender, Māori, Pasifika, disability and ethnic communities is more urgent than ever with inflation picked to hit its highest level in 30 years, says MindTheGap NZ.

Economists are tipping annual inflation to hit around 6% when the December quarter Consumer Price Index is released on Thursday on the back of rising fuel and household costs.

“The gap between inflation and wage inflation is growing, with the latest wage inflation data in Aotearoa at just 2.1%. This gap hits women, Māori, Pasifika and ethnic minorities the hardest, who are affected by pay gaps and are often the major breadwinners in low income households,” says MindTheGap NZ spokesperson Jo Cribb.

“Household costs in particular are rising sharply as COVID-19 impacts supply chains, and given the lowest paid spend proportionally more of their income on food items, inflation hits these groups the hardest.”

According to Trading Economics, the most important category in the consumer price index in New Zealand is Housing and Utilities (24.2 percent of total weight).

It’s been fifty years since pay equity legislation was passed. Yet, still the gender pay gap is at 9.1% according to Statistics NZ and has remained at between 9 and 10% the past decade. Pay gaps also persist for Māori, Pasifika peoples, disability and ethnic minorities.

“With inflation rising sharply, these groups too are facing a tight squeeze on their household budgets.”

MindTheGap NZ is urging legislation to make it mandatory for companies employing more than 50 to report on their pay gap.

“We know from overseas experience that when pay gaps are known, it becomes much easier to close them. With inflation risks persisting in 2022, now more than ever we believe more steps must be taken to close the gap.”

On 8 March, a Public Pay Gap Registry will go live at mindthegap.nz which will show for the first time which businesses are publishing their pay gaps for gender, Māori and Pasifika peoples.