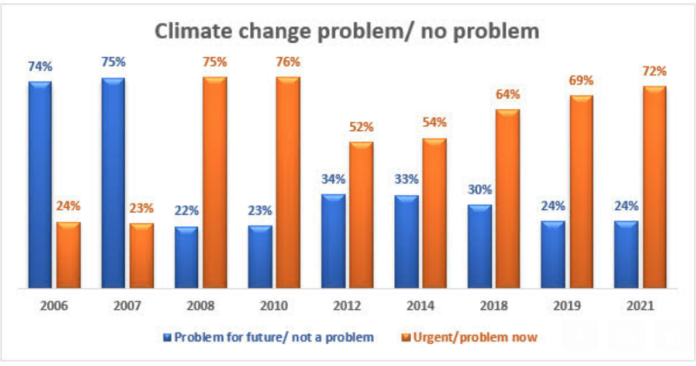 Concern about climate change is at its highest for nearly a decade, yet 78% of Kiwis don’t believe enough will be done in the next 10 years to avoid damaging temperature rises.

Horizon Research has been tracking levels of public concern on climate change since 2006. Its latest November survey reveals that 72% now consider climate change a problem:

Concern that climate change is an urgent problem or a problem for now is at its highest among New Zealand adults since 2012.

78% of 18-24-year-olds consider climate change to be more of an immediate problem compared with 66% of people aged 75+ years.

New Zealanders have very little confidence that the world will do enough in the next 10 years to avoid damaging temperature rises.

35-44-year-olds have the most confidence (22%) that temperature rises will be avoided in the next 10 years. Similarly at 20%, 25-34-year-olds also have some confidence in change.

81% of females have less confidence that there will be change in the next 10 years to avoid temperature rises.

50% of females are not very confident about change vs 39% of males.

However, slightly more males (36%) are not at all confident vs 31% of females.

Results are from a survey of 1,097 people aged 18+ representing the New Zealand adult population at the most recent census/ The online survey was conducted by Horizon Research between November 17 and 27, 2021. It is weighted by age, gender personal income, employment status to reflect the census population. The maximum margin of error overall is +/- 3%.

The survey was commissioned by Horizon as one of its regular public-interest projects.