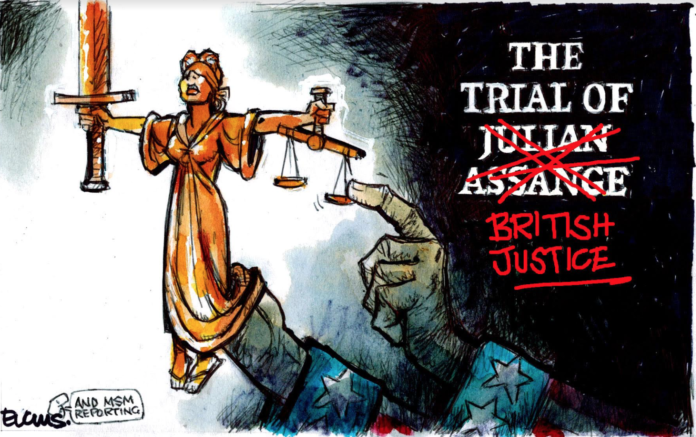 Julian Assange is facing politically motivated criminal charges, laid by the Trump Administration. These charges reflect an abuse of process, designed to silence Assange, and to gag media freedom. Assange’s case has profound implications for the right of the public to know the truth about government wrongdoing – particularly abroad.  In late October a court in London heard argument in an appeal by the US against a decision in January this year by Judge Vanessa Baraitser not extradite Assange.

New Zealand – as a responsible member of the international community – must stand on the side of fairness and transparency by offering Assange asylum.

While the legal process continues Assange is being kept in limbo: held in Belmarsh prison while he awaits a decision as to whether he will be deported from the UK to the United States where he faces 175 years in prison for alleged breaches of espionage laws. The evidence against him concerns the publication in 2010 and 2011 of materials (including a chilling video showing US troops killing civilians in Iraq) about the US and its allies’ tactics and war crimes there and in Afghanistan. We now know that in 2017 CIA wanted to “take him out”, or kill him, according to revelations published by Yahoo News.

The essence of the case can be summarised this way: Assange, an Australian citizen, is being prosecuted by the United States for speaking truth to power (by providing a window into nefarious activities of the military industrial complex). His motivation was the pursuit of transparency, justice, and ultimately peace.

These pursuits are central to the job of any journalist. In publishing this material, Julian Assange was doing his job – as a journalist and as a citizen. However, he has been cast adrift by the Australian government, despite it professing to be committed to values like freedom of speech and a free media. This refusal by Canberra to speak frankly to its number one friend in Washington and demand the end of the persecution of its citizen Assange provides an opportunity for New Zealand. The opportunity to uphold the human rights values which are at stake here and use its renowned independence and sense of principle to support Assange.

New Zealand has built its reputation as being at the forefront of human rights advancement, dignity and responsible citizenship – it is trusted internationally as being fair (and kind). It is in many respects a diplomatic powerhouse able to achieve agreements and navigate contentious political waters when others can’t.

Assange has always stated “The goal is justice, the method is transparency . . . . If wars can be started by lies, peace can be started by truth.” This is a totally consistent position with New Zealand’s stance on peaceful diplomacy, from Nuclear Free NZ, to the successful ‘Soldiers Without Guns’ peace mission in Bougainville.

The other reason for New Zealand involving itself in the Assange case is because of the extraordinarily dangerous precedent this case sets for journalists anywhere in the world. By way of background, the Obama administration initially declined to prosecute Assange due to what it called the “New York Times problem”—the dilemma of indicting Assange for the very same kind of investigative journalism that mainstream media practices. However under President Trump the Justice Department indicted Assange under espionage legislation.

No media outlet or journalist has ever been successfully prosecuted under the espionage laws Act for publishing truthful information in the public interest, which is protected by the First Amendment.

But the message from the US to all journalists and citizens, no matter where in the world they are, is if you publish material which Washington wishes to keep secret then you can be the subject of an extradition request.

The Assange case is not simply a bilateral issue between the US and UK or the US and Australia. It is about critical democratic values being put at risk by a dominant world power. On this basis it is time for New Zealand, with its respected voice on human rights to make a stand.

New Zealand has long established relationships with the US, UK and Australia. The persecution and plots of assassination against a South Pacific journalist for revealing war crimes, demands a clear response. New Zealand can use its position as a small principled nation to stand for its values and offer Julian Assange asylum.