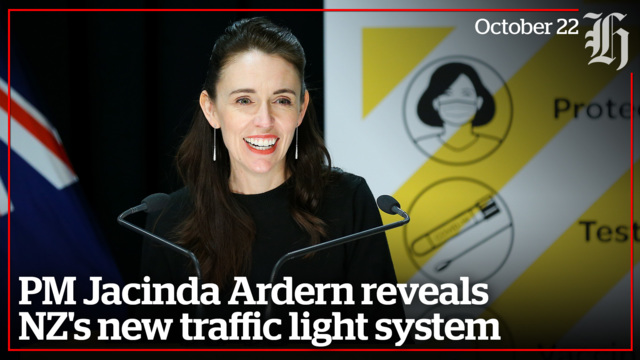 THE FIRST THING to note about the Government announcements of Friday, 22 October 2021 was the staging. Clearly, the dimly lit Beehive Theatrette is no longer considered an appropriate setting for the Prime Minister’s communications. Accordingly, proceedings were moved to the Beehive Banqueting Hall. (The change may have been dictated by the sheer number of journalists clamouring to attend, but still.)

The second change was in the cast. Where was Ashley Bloomfield, the Director-General of Health? Today’s drama featured no experts. As noted above, our Covid universe now rests on politicians – all the way down.

As for the script, well, the date of 1 December may not have been mentioned, but it was there nonetheless. With Auckland declared to be about a day-and-a-half away from topping 90 percent of Aucklanders with one jab, it follows that the city is less than a month away from 90 percent being double-jabbed. That’s the cue for New Zealand’s largest city being set free from its Level 3 Lockdown, on, or just after, 1 December. When asked if that meant Aucklanders can join their families for Christmas, the Prime Minister said Yes – although travelling beyond the city will require a Vaccination Certificate (according to Chris Hipkins, empowering legislation is on the way for employers keen to enforce vaccination mandates) and quite possibly a negative Covid-19 test.

And Māori? Ah, yes, that’s where the fancy-footwork really got going. The nationwide goal of double-vaccinating 90 percent of the adult population, and then transitioning to the new “traffic-light” system of managing the virus, makes no mention of the Māori vaccination rates also topping 90 percent. That’s a significant omission. Like Judith Collins, Jacinda Ardern is clearly unwilling to have the whole country “held hostage” to Māori vaccine hesitancy – let alone refusal.

The Government has masked this by opting to tick-off the 90 percent vaccination target DHB by DHB. This will allow Māori leaders to identify where the extra $120 million for the double-jabbing of their people might best be spent. But that’s about as far as the Government is prepared to go.

That Peeni Henare’s Banquet Hall contribution gave every appearance of having been brutally truncated – by someone – may indicate that Labour’s Māori Caucus is less than happy with the Labour Cabinet’s decision. Notwithstanding their objections, however, the Key-Act-National position on Māori vaccination rates also seems to have been embraced by the Labour Government.

As for the PM herself, Jacinda Ardern seemed more comfortable and on top of her game than she has been for weeks. Though she hasn’t announced 1 December as “Freedom Day” in as many words, that is clearly the timeline she is working to. The Prime Minister of New Zealand cannot assure 1.6 million Aucklanders that they will be free to visit their families at Christmas – wherever they may be located in new Zealand – and then renege on her promise.

Not without all hell breaking loose.