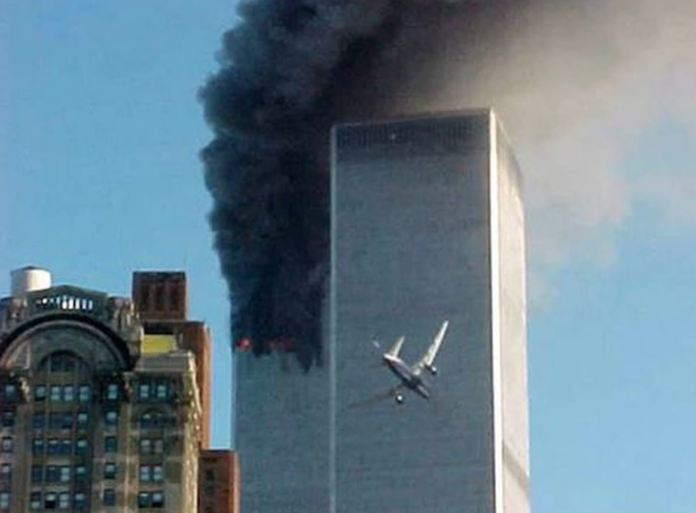 Something that comes up on the anniversary of 9/11 is that question: “where were you when…”.

Now, think about that for a minute. Each of these were, in essence, epochal-transition points. Critical, symbolic junctures wherein something which had been bubbling beneath the surface of the preceding few years, burst with irrepressible force into the mainstream and left our realities forever fundamentally changed as a result.

Well, 9/11 was, of course, a far darker mirror image. There, as somebody put it, it was willpower married with low-tech and on the part of – ostensibly – a small-ish group of non-state actors against a superpower.

Quite the opposite to the Moon Landing – which was, after all, a superpower acting somewhere between ‘against another superpower’ in the context of the space-race .. but also, in its better moments and in its better rhetoric, acting not ‘against’ anybody. “We came in peace for all mankind”, indeed.

It precipitated a “high-budget, low-concept response.”

I recall where I was that Wednesday morning. Mum was driving me to school (I was 11), we had the radio on in the car as we usually would, and there was a New Zealander at the UN being interviewed just … describing events as he saw them and as they were happening. We pulled up at my intermediate, and whereas usually I’d have gotten out with my violin to head across for orchestra practice at the neighbouring Auckland College of Education, as it was then, and Mum would have driven off to continue on her way to work … that morning, we just sat there, listening. It was all you could do.

The picture which emerged was unclear. Hardly even really a picture. Just some clearly worried guy on the other side of the globe talking about what little he knew through his own eyes to his countrymen down here on the bottom of the world. Some shapes emerged through this mist, sure – but it was clear far bigger forces were at play than could be congealed through a single interview, a single sitting, especially as they were still then ‘in motion’.

In the hours and days to come, some harder perceptions – I hesitate to state ‘facts’ at that early juncture – began to emerge. I recall discussion in class about some guy named Osama bin Laden. I recall pretty immediate – like, same day – realization that War Was Coming.

I also recall, somewhat to my amusement now, a student teacher then working  with our class printing out some prophecy purportedly by Nostradamus talking about … well, the events of 9/11 and spooking us a bit about that. I say “spooking”, but when you’re 11 it’s not quite the right emotion – it’s a sparking of curiosity in different direction. I managed to track down a book of Nostradamus’ prophecies in our home library after school and was rather … disappointed at the dysjunction.

The Ending of Eras rarely coincides precisely with some human-imposed calendrical dating system. And those who live through them are rarely possessed of the clarity that that is what is occurring – at least, not until the rear-view mirror is far enough away from the events in question to invoke some measure of clarity through retrospectives en-aided and availed through temporal distance.

I don’t know that Hunter S. Thompson actually said that the Sixties came to an end with the riots in 1968 at that year’s Democratic National Convention in Chicago (certainly, he explicitly posited the Ali vs Frazier fight in 1971 in such terms), but between that and how he described the Rolling Stones concert at Altamont in December of 1969 – “where the sharks finally came home to roost” – we have just such an epochal-transiting event.

A place where, to quote Thompson again, we can perceive a “high-water mark – that place where the wave finally broke and rolled back.”

Such it was, I suspect, for The Nineties – and the vibe of penchant promise for what the New Millennium and Y2K excitement-as-an-ethos was meant to mean.

Francis Fukuyama’s “End of History” concept is often mis-invoked by those looking for an easy point-score. He didn’t mean that ‘history’ in the sense of noteworthy events was at a permanent ending following the cessation of overt hostilities in the Cold War and the seeming triumph of the West over its major ‘competitor.

However, his central thesis that the Hegelian procession of history was at an end, and Liberal Democracy had ‘won’ … well, those planes going into those towers most certainly marked the ‘Wave of History’ breaking most messily upon New York, upon America and in a way the Liberal West itself.

And what rolled out with the tide was a faux-‘Innocence’ (much talked about, very rarely actually demonstrated prior to this point), various commitments to Liberty in any but the rhetorical sense, as well as the comfortable satiation of having been “the only game in town” and untouchable as the summation of a Whiggian conception of history.

Not just the specter of Terrorism (which was, after all, not at all a new phenomenon) – but of Terror Laws. Not just armed Interventions – humanitarian or otherwise in other countries (again, not at all a new phenomenon … the USSR had been intervened in Afghanistan only twelve years before) – but a seeming restoration of the kinds of …  blatantly self-interested neo-colonial conquests as applies the War in Iraq which seemed more a relic of the 1800s than the 1980s.

Speaking of the 1980s – if that was ‘Morning In America’ (and, via extension, for the West overarching), per Ronald Reagan’s campaign rhetoric upon the subject as of 1979 … then the 1990s were its noon-day Zenith and the early 00s , the so-called “Noughties” (an interesting pun in light of the flagrant disregard for international law which eventuated at this point – the flagrancy rather than the disregard being the truly novel feature) a sort of premature Twilight.

Yet what blotted things out was not, I do not think, clouds of ash and debris from a financial center burning one mid-week morning in New York. But rather, the human actions, the state-level actions, undertaken in – not always unnecessary – trenchant response.

Just prior to the outbreak of the First World War, then-British Foreign Secretary, Sir Edward Grey, uttered the immortal words in succinct summation of the situation:

“The lamps are going out all over Europe, we shall not see them lit again in our life-time.”

That chilly morning in mid-September, 2001, which everybody seemingly recalls where they were upon … we witnessed something similar, I think.

And as the ensuing events over the next twenty years have demonstrated – in that dark, it’s back to Business as Usual and History ‘Pon The March.