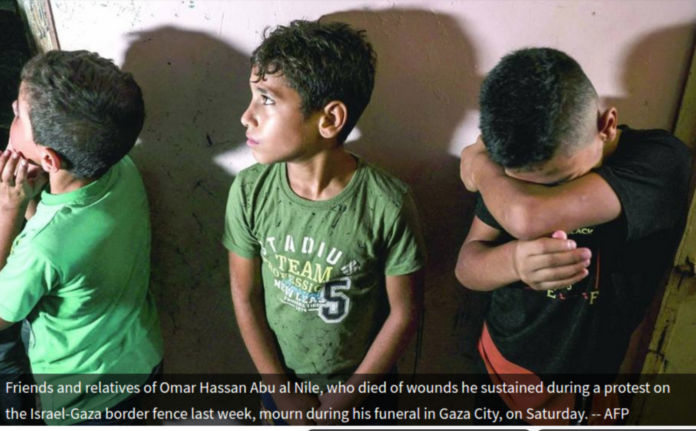 In an article published by the US Defense News, Yair Ramati of the Israeli MirYam Institute, discussed what he considered to be the “central pillar of Israel’s security strategy”. His concern was the maintenance of Israel’s “qualitative military edge” superiority in the Middle East, which is guaranteed at present by the ten-year $38 billion Memorandum of Understanding (MOU) with the United States. Now, according to the Times of Israel, senior officials in the Biden Administration have reassured Israel that: “If anything, the end of America’s military involvement in Afghanistan frees up resources and attention and ultimately allows us to better support our partners like Israel.” The officials went even further, stressing that: “We are pursuing a very steady course, centred on achievable aims; alignment of ends and means; and, first and foremost, support to our partners, and, of course, Israel being second to none.” To be precise, what is actually “second to none”, for the US ruling elite, is the imposition of profitable population-control – a commitment that it also recognises in Zionist ideology.

No concern for people

In 1978, the People’s Democratic Party of Afghanistan (PDPA) overthrew the ruling dictatorship in Afghanistan and introduced democratic and humanist reforms, such as free medical care and a campaign for general literacy. John Pilger informs us that the Washington Post had reported Afghan loyalty to the new government as unquestionable. For the US Government, none of this was worthy of recognition, let alone support. The reforms were dismissed as a ‘Soviet coup’, flying in the face of a reality later recognised by President Jimmy Carter’s Secretary of State, Cyrus Vance, stating: “We had no evidence of any Soviet complicity in the coup.” In 1979, the US began its campaign to destroy Afghanistan’s newly-won freedoms. In August that year, the US Embassy in Kabul reported: “the United States’ larger interests . . . would be served by the demise of the PDPA government, despite whatever setbacks this might mean for future social and economic reforms in Afghanistan.” A Washington Post article reminds us: “the Afghanistan Papers revealed that over the course of the past 20 years the United States flooded Afghanistan with a trillion dollars, which quickly went into the hands of various military contractors and advisers and lined the pockets of government officials. Like the British before it, the United States adopted a policy of paying off and co-opting local warlords and drug traffickers.”

The Daily Toll in Occupied Palestine

One week after just one Palestinian Gaza ceasefire violation, that had been followed over ensuing days by eleven Israeli attacks, Resistance fighters in Gaza finally reacted on 24 August, to mounting assaults on the enclave which included four air strikes as well as attacks on fishing boats. One of the air strikes, on the al-Shati UN refugee camp, was particularly terrifying for the families because an Israeli air strike, last May, on the same refugee camp, had killed ten people, eight of them children.

Four days earlier, Israeli forces, opening fire on protesters, wounded 41 people, including at least 24 children. Among the wounded was a news reporter, Assem Mohammed Abdullah Shehadeh. Local news media footage shows an Israeli sniper shooting at Palestinians through a small opening in the wall isolating Gaza, and people are seen trying to deflect the gun poking through it. One armed person runs along the wall and, by reaching up into the opening with a hand gun, manages to shoot the sniper and stop him firing. The sniper, Barel Hadaria Shmueli, was hospitalised with a head wound, from which he has since died. Another Palestinian victim of Israeli sniper fire that day was a 13-year-old Gaza City resident, Omar Hassan Abu Al-Nil. According to a field investigation by Defence for Children International Palestine, he had been targeted and wounded with a live round by another sniper and died of his wounds three days later. Omar had been watching the protests from a distance of over 70 metres.

On 27 August, Israeli Prime Minister Naftali Bennett met with US President Biden at the White House. Bennett told reporters that he and Biden had “created a direct and personal connection between us”, which he regarded as “a significant step in equipping and building the Israeli force.” On 29 August, Bennett declared: “We will operate in Gaza according to our interests” and so, indeed, the air strikes and gunfire continued, with Palestinian Resistance resorting to the launching of incendiary balloons, burning tyres and the firing of a missile across the Green Line, in protest and outrage.