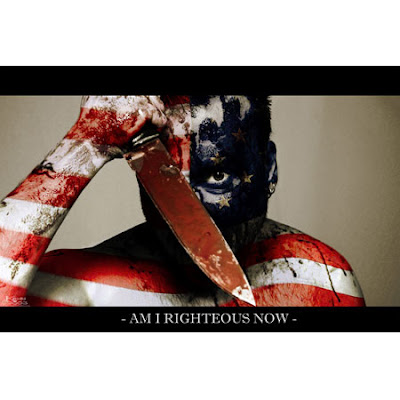 The Pentagon has said it is investigating reports of civilian casualties from a drone strike on Sunday in Kabul, but is “not in a position to dispute” accounts from the scene of nine people from one family being killed, including seven children.

US military officials continued to insist however that the strike hit an Islamic State (IS) car bomb, pointing to “secondary explosions” at the scene. That conflicted with reports from Kabul, that the targeted vehicle belonged to a civilian and that children were in it when it was struck by a missile from a US drone.

Initial reports said at least 10 people were killed, nine from the same family, who lived on the street where the attack happened, adding to the bloodshed and chaos of the last days of the 20-year US military presence. Among the dead were three two-year-old children, two aged three and two aged 10, according to reports from Kabul.

Are we feeling righteous yet?

Is there no more fitting end to America’s occupation of Afghanistan than a drone strike that murders 7 children?

America of course described this drone strike in a city as over crowded as Kabul as an act of self defence in the exact same way the IDF do when they target militants and murder civilians.

Those civilians are always an acceptable collateral damage in the pursuit of vengeance.

After the CIA funded the most radical elements of the Afghan militia to fight the Soviet’s – INCLUDING ironically funding Osama Bin Laden, the US walked away from Afghanistan with various fanatics still armed to the teeth with their CIA funded weapons.

The US oil industry then tried to work with the Taliban and America pursued business interests regardless of what the Taliban were doing to women, then September 11 happened and to punish a terror attack that was conducted by a mostly Saudi team of terrorists, America invaded Afghanistan as a pretext for invading Iraq.

Afghanistan was a CIA inspired black ops clusterfuck that has blown back in our faces, like it always fucking does.

Here were the Wall St Journal headlines weeks after 9/11… 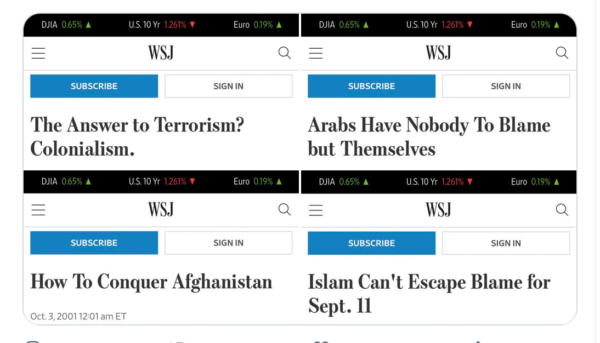 …Afghanistan was never a war for democracy or justice or feminism, it was an Imperial distraction to justify invading Iraq.

Watching America crawl out broken from Afghanistan while committing more war crimes in their dying hours is the perfect end to an obscenity that should never have happened.