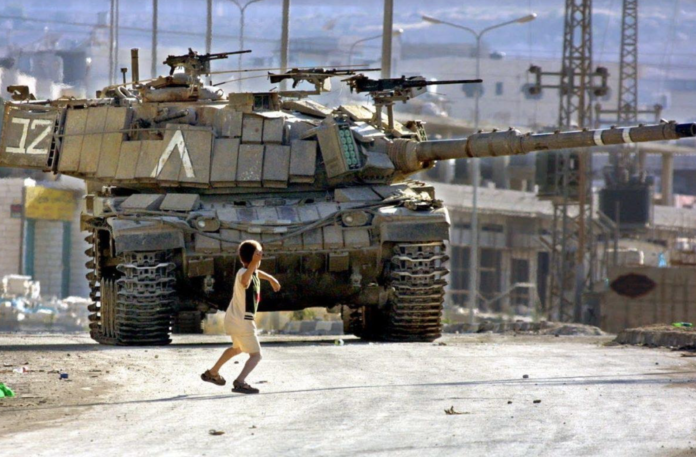 First of all, a correction and sincere apology: In my previous blog, I inadvertently referred to Miko Peled’s grandfather, Avraham Katsnelson, as having fought as a general in the 1967 Six-Day War. Avraham Katsnelson was a signatory to Israel’s Declaration of Independence — but of course, it should have read that it was: “Miko Peled’s father, Mattityahu (Matti) Peled” who took part in Israel’s seizure of the Sinai Peninsula, the Gaza Strip, West Bank, East Jerusalem and Syrian Golan Heights.-LB

A United Nations report, dated 15 August 2021, notes that 79 Palestinian children have been killed (67 of them in Gaza) since the beginning of this year, and a further 1,269 wounded/injured. An increasing use of live ammunition in the West Bank, including East Jerusalem, by Israeli Occupation forces this year has killed 11 children and wounded 206. A total of 39 Palestinian adults have also been killed by live Israeli ammunition. In addition, illegal Occupation settlers injured a further 24 Palestinian children — five girls and 19 boys. Up till 9 August, the Israeli Occupation destroyed, seized or forced householders themselves to demolish 57 homes, displacing 97 people, including 67 children. Economic sabotage ruined the livelihoods of 240 other people. In the Jordan Valley, a further 17 dwellings were seized, with the displacement of 27 people, including 19 children, in the Ibziq Bedouin community. On top of all this, an additional 28, including 21 children, were displaced with the destruction of six dwellings in Ramallah. In East Jerusalem, Israeli forces also destroyed 12 buildings, including five businesses.

The above report was presented by OCHA, a United Nations body established in 1991 by the General Assembly. The annual budget is funded five per cent by the UN, with the balance provided by voluntary contributions, mainly from Member States. New Zealand’s MFAT website acknowledges that “the United Nations Office for Humanitarian Affairs (UNOCHA) plays a key role” in assessing humanitarian situations and needs.

MFAT goes further, claiming that: “New Zealand takes an active role in peace, human rights and security initiatives, advocating for rules that curb armed conflict, halt the spread of dangerous weaponry and promote universal rights and freedoms”. In sports and games, rules are mutually agreed upon but where armed advantage is employed to deny human human rights, those rules must also be enforced, else they remain nothing more than empty concepts. To never enforce amounts to complicity.

Does MFAT endorse the OCHA report? Does it advocate action in defence of Palestinian human rights and the rules that are supposed to curb armed conflict? Apparently not — or have I missed something? It would be great to hear of New Zealand Government support for it, along with a proposal such as the imposition of sanctions to uphold respect for international law.

Acknowledgement of the truth alone is not enough

Last May, Prime Minister Jacinda Ardern was reported as saying that Israel’s “encroachment, settlements and evictions” get in the way of a two-state solution with Palestinians. What she failed to recognise is that Israel has made such a ‘solution’ impossible and that what she terms ‘encroachment’ and illegal settlement are essential to the realisation of the Zionist enterprise. Israel regards its settlements not only as permanent but also as part of a continuing process. The nearest the Prime Minister could come to recognising the reality was to comment: “What we’re seeing at the moment is devastating — absolutely devastating.” The Ministry of Foreign Affairs and Trade (MFAT), taking part this year in a United Nations Security Council VTC Open Debate on 16 May, reminded the world that, in its support for Resolution 2334, New Zealand had “condemned Israeli settlements as a flagrant violation of international law.”

In previous blogs, I have given many examples of UK Government Foreign Office acknowledgements of Israeli war crimes, each of which was accompanied by empty, soulless rhetoric. So how does New Zealand shape up with regard to its duty to deal responsibly with Israel’s violations of international law? Recently, I gave publicity to the Israeli Army shooting and killing of an 11-year-old boy sitting in his father’s van. Attention to this was emailed to a number of NZ MPs, including Nanaia Mahuta. She did not reply. However, another concerned person also sent the Minister details of the child-killing and she did respond:

“As noted in our previous correspondence on this matter, Aotearoa New Zealand has a strong history of protecting and promoting human rights in Palestine and we regularly engage on these issues in both bilateral and multilateral settings, including through our voting on these matters at the United Nations (UN). Aotearoa New Zealand’s response to the recent hostilities in Israel and Palestine exemplifies this.

“Aotearoa New Zealand will continue to pursue a principled and balanced approach to the Middle East Peace Process”.

While Israel continues to militarily-Occupy the West Bank, the land-grabbing Zionist enterprise, having annexed for itself both East Jerusalem and the Syrian Golan Heights, continues to impose a grindingly-impoverishing blockade of the Gaza Strip, subjecting the enclave to frequent Israeli Army incursions, air strikes and Israeli Navy attacks on Palestinian fishing boats. The Palestinian victims of this endless foreign population-control are being betrayed by our politicians, who read UN reports that reveal egregious violations of international humanitarian law — yet choose to look away rather than take action to bring Israel to account. There is no so-called ‘balance‘ when a defenceless population is forced to live under permanent foreign military Occupation. The Palestinian people are being denied self-determination by a nuclear-armed power that refuses even to sign the Treaty on the Non-proliferation of Nuclear Weapons. What does ‘a balanced approach‘ even mean in such a context — other than to covertly empower the aggressor?

A joint Israeli/Palestinian organisation has set our own government — and all UN member states — an example for action. In a rejection of armed violence, Combatants for Peace unites Israelis who served in the Israeli military Occupation and Palestinians who engaged in armed resistance to it. They work to win support for international law, peace, equality and justice and have just sent a petition to the International Criminal Court (ICC), to investigate last month’s demolition of dozens of Palestinian homes in the Jordan Valley village of Khirbet Humsah. Combatants for Peace believe, quite rightly, that the destruction of homes is a war crime. Experience has taught them — from two points of view — of the injustice, cruelty and futility of armed violence. They work together now for international humanitarian law to be properly respected so that violators of human rights may know, with certainty, that they will be brought to account. Combatants for Peace strive to enable an environment of equality for Israelis and Palestinians to live side-by-side in harmony.